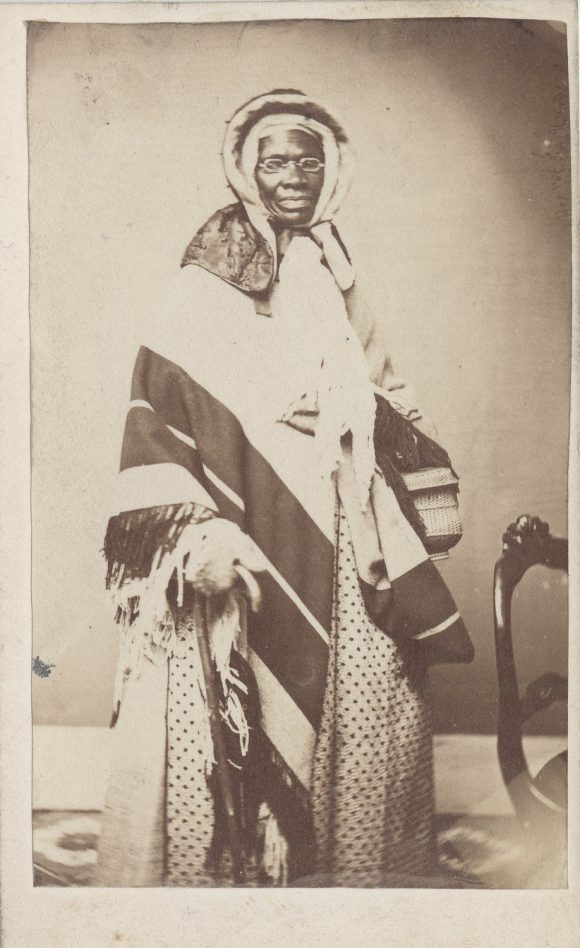 Portrait of Sojourner Truth. Courtesy of the Chicago History Museum.

When news of the executive order on immigration broke last week, I was looking at a photograph of Sojourner Truth. The picture had been open on my desk for days—the object of an essay I’m writing—and its content struck a particular and heartrending chord.

The picture, dated roughly to 1861, is the earliest known photograph of the famous abolitionist, whose many literary and photographic feats are often overlooked thanks to a single, misquoted line of one famous speech: “Ain’t I A Woman?” This image was made available in print for the first time last year by art historian Darcy Grimaldo Grigsby in an exceptional collection of Truth’s many early photographic portraits, titled Enduring Truths: Sojourner’s Shadows and Substance. Of the twenty-eight images of Truth featured in the book, most of which were sold as keepsakes to support Truth’s travels and activism, this one is perhaps the oddest.

It’s not your average nineteenth century portrait. The bottom of the photograph is busy: there’s a bit of rug, some unseemly baseboard molding, and a chair pushed to the edge of the frame—perhaps a sign that the picture was taken outside of a formal studio, or at least in a manner not typical for a standard studio sitting. Truth herself is bundled with clothing. She wears a full dress, a polka-dotted apron, a shawl, a scarf, a head wrap, and a quilted bonnet. She looks squarely and somberly into the camera’s lens. Over one arm, Truth carries a Nantucket basket; with the other hand, she leans upon a sturdy cane. Truth is poised for a journey.

This image tells the story of a woman caught in a wavering legal landscape fueled by racism and ignorance.

At the onset of the American Civil War, Truth traveled to Indiana to stump for the abolition of slavery and the Union cause. Technically, the midwestern state was Republican and pro-Union, but its strong ties to the South, especially after a handful of Confederate military victories, had caused tensions to rise. Truth arrived as riots were breaking out. Several recruiters for the Union army had been recently murdered. And what’s more, Indiana strictly enforced its Black Codes. All counties maintained a so-called “Negro Register” to surveil its black population, black settlers to the state were charged a $500 bond to guarantee “good behavior,” and black residents were prohibited from attending public schools and testifying in court cases that involved white people. In the 1850s, both anticipating and following the Dred Scott case, Indiana forbid any black person not already registered to travel into the state. Cue Sojourner Truth.

She arrived in Angola, Indiana—undocumented—to give a number of lectures at the Steuben County Courthouse. At the first, she was overcome by a pro-slavery group of Copperheads. Josephine Griffing, Truth’s white abolitionist companion, covered the event for the Liberator and wrote that the mob rushed the balcony and shouted Truth down “like a pack of hounds.” Other fervent critics stood behind curtains on the platform stage and yelled taunts and jeers. “Threats of tar and feathers, eggs, rails, shooting, and a general blowing up, were heard at every corner,” reported Griffing. A group of allies managed to extricate Truth, and she retreated to the home of a prominent white judge. The mob, undeterred, followed close behind: “They threatened to burn down the building if she spoke;” writes biographer Margaret Washington in Sojourner Truth’s America, “She vowed to speak to the ashes.”

Anticipating further menace, Truth’s supporters prepared for action. The Angola Home Guard was called in to escort Truth under military protection to a second engagement at the Steuben County Courthouse, and the women of the abolitionist movement outfitted her for the journey. In her autobiography, The Narrative of Sojourner Truth, which was originally published in 1850 and updated throughout her lifetime, Truth describes the preparations:

The ladies thought I should be dressed in uniform as well as the captain of the home guard, whose prisoner I was and who was to go with me to the meeting. So they put upon me a red, white, and blue shawl, a sash and apron to match, a cap on my head with a star in front, and a star on each shoulder. When I was dressed I looked in the glass and was fairly frightened. Said I, ‘It seems I am going to battle.’ My friends advised me to take a sword or pistol. I replied, ‘I carry no weapon; the Lord will [p]reserve me without weapons. I feel safe in the midst of my enemies; for the truth is powerful and will prevail.’

Truth’s legal status is disturbingly complicated. She was a freedwoman who escaped slavery in the Hudson River valley even as New York was starting to abolish the abhorrent practice. Though the sixty-four-year-old Truth had been free for decades by 1861, the moment she set foot into Indiana, her freedom was de-authorized. Truth was submitted to a kind of repossession, transited as the “prisoner” of the Home Guard, and forced to revisit the captive status of her youth.

The communal act of getting dressed that this passage and photograph memorialize are equal parts touching and terrifying. It’s a familiar tale: the borrowed blazer or a roommate’s pair of earrings to wear to an interview, or on a date, or out into the cold are considerate and, ultimately, inessential. They are sweet and ineffectual offerings that are closer to talismans than protections.

Truth arrived safely at the courthouse and gave a stirring speech. She even sang “The Star-Spangled Banner” in her triumph. But this wasn’t the last of what would be a long battle. Warrants were delivered for Truth six times while she was in Indiana, and she was arrested and jailed on several occasions—at each turn she was defended and liberated anew. Every time, the abolitionists’ following grew, commanding larger audiences on each stop of their lecture junket. “I have never labored a month in the cause of human freedom with so much acknowledged results,” exclaimed Griffing.

On Sunday, I joined the demonstration outside of Raleigh-Durham International Airport. One-hundred and fifty people were expected; one thousand showed up. The mood was jovial—no one was being detained at our barely-international hub—but the solidarity and the presage of things to come stewed with the crowd. Old shoe boxes bore handwritten messages, there were some drums, and chants were relayed, more or less, in time. I saw signs that spoke to a particular regional history and aesthetic in North Carolina: “Y’all means all.” I watched Jedediah Purdy, legal scholar and author, pump a book of constitutional law in the air in what was a steadfast political shaming; it was also probably an inadvertent and effective tricep workout. There were families with small children, college students, and a woman with a walker, which she maneuvered while taking videos on her phone. I even watched a mother and her two sons distribute some granola bars purchased in bulk to the crowd.

I thought of Truth, and what it might mean for us to prepare for battle.