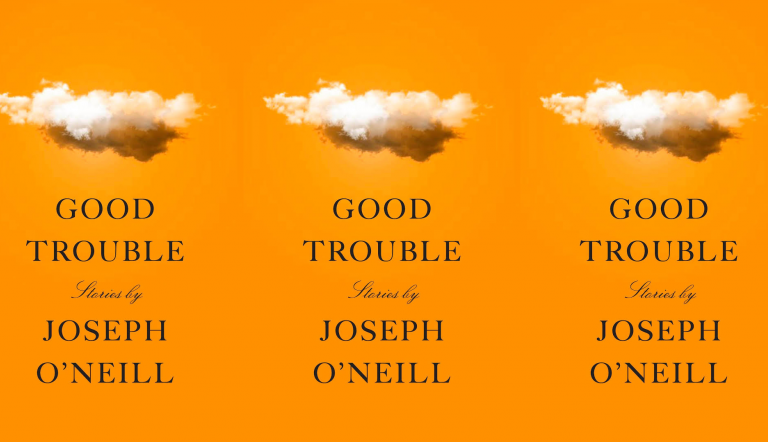 The eleven stories in Good Trouble read like a string of understated poems that progress, implode, and digress. They are compelling not only because of Joseph O’Neill’s memorable characters but also because of his density and diction. He wields an acerbic blade, rendering the weird and violent with a determined frugality and control. Large sections of the book contain language condensed and packed with throbbing details. There is a subtle awareness of the fictional artifice that, in a way, manifests in how the narratives modestly rely on the plot. And often, in the speedy course of the stories being told, distended by the pressures of reality (channeled in through rounded, well-developed, yet disruptive plots), O’Neill resorts to the landscape with the abandon and felicity of a poet. In “The Trusted Traveler,” for instance, the professor from New York who has retired to Canada feels intruded upon and agitated by the prospect of a former student’s visit—less by the actuality of Jack’s visit. At the end, when Jack disappears, the professor, still grappling with the idea of Jack’s presence, dwells on the details of the beach. He experiences emancipation, a sort of meditative release:

Our beach is a sand and shingle beach. The sand is a common blend of quartz and feldspar. The sand emerges from the ocean, so to speak, and continues inland until quite suddenly shingle replaces it. The shingle, or gravel, consists at first of pebbles, next of a mixture of pebbles and cobbles, and finally almost only of cobbles. This progressive distribution of the beach stones, apparently methodical, is in fact natural.

When I read the story for the first time, I wondered why O’Neill had slid into something that does not have much to do with the story, only to realize that, here, he is conveying how we are terrified with the way we conceive reality and how our conception of reality itself becomes our entanglement, our chief mode of confronting reality. By digressing, O’Neill confers on the beach (and, to a considerable extent, on the narrator-protagonist) a quality of mystery. The beach is not merely a metaphor of consolation where, leaving one’s past behind, one goes walking languidly with one’s wife. Seen through the professor’s eyes, jaded and peeved, the beach assumes a metaphysical quality.

Generally, however, O’Neill is very much jostling the real world. His voice is funny and fierce, his concerns unforgivingly political and contemporary. In “Pardon Edward Snowden,” he dramatizes the internal battle of a poet. Cuckolded and divorced, Mark is stuck in a rather dry patch. A fellow poet sends him a verse petition—a “poetition”—to be sent to President Barack H. Obama. Before endorsing it, Mark meets up with his only friend, Liz, to discuss the intricacies of the matter. However, in the course of their conversation, Mark keeps to himself, not expressing how much he derides “the Swedish buffoons” for awarding the Nobel Prize to Bob Dylan. Later, Liz suggests how she can’t separate the decision from the Trump phenomenon, to which Mark adds the dimension of hypercapitalism. It is a curious association, suggesting how he probably vaguely equates the Dylan reader with the Trump supporter, both of whom have fallen for glorified wealthy men. Given the general tilt of Mark’s politics, one expects him to endorse the “poetition,” but he decides not to. He resists the erosion of his self by resorting to silence.

The takeaway is that, in Mark, O’Neill is weighed down by the health of contemporary American culture. It is a realm, degraded and cacophonous, where the citizens of civilization have lost the discretion of whom to exalt to power and prestige.

The stories greatly vary in size and scope. “The World of Cheese” is a long story, told with a tremendous emotional impact. It tracks the journey of an old woman on a plane back to California from New York while she muses about her chaotic past and uncertain future. “Promises, Promises” is a short short, compact and cryptic, about a wife who, in the presence of her jocular husband, eyes a masculine surfer braving the sea. But the story that struck me for the vastness of its theme and the brazenness of its content and the beauty of its tone is the last one, “The Sinking of the Houston.” A fifty-one-year-old father is nagged by his fifteen-year-old son, who asks him disturbing questions. Does he know about the Duvaliers? The father shuts him up. Does he know about Charles Taylor? The father avoids him until, again, the son brings up 731. Here, we get the bit about the compromising role of the United States in treating the Japanese “scientist-murderers,” who during the Second World War, performed vivisections on Chinese men, women, and children in the medical facility called 731. This is a crucial, disconcerting moment in the story. But it is only after the son is mugged on the subway by a black man that the fascinating paradox at work within the character of the father is revealed. He is not only the insensitive hog who consumes the news and facts of history as one consumes burgers and French fries: he embodies the dialectic. As soon as he gets ready to track the domestic ‘criminal,’ we know that his ignorance is feigned. In fact, he not only knows about Charles Taylor but also thinks about the Liberian thug organically; the mention of the vivisections done by the Japanese reminds him how Taylor’s child recruits had not only murdered their parents but also performed vivisections on the pregnant women. It is this aspect of the father—the ability to be knowledgeable—that makes the story work. What we get as a result is an engaged critique of consumerism and the insulated white American liberal sensibility—and how feebly it is tickled by the mention of gruesome atrocities committed at home and abroad.

Good Trouble is an essential book, full of unexpected bursts of meaning and beauty.