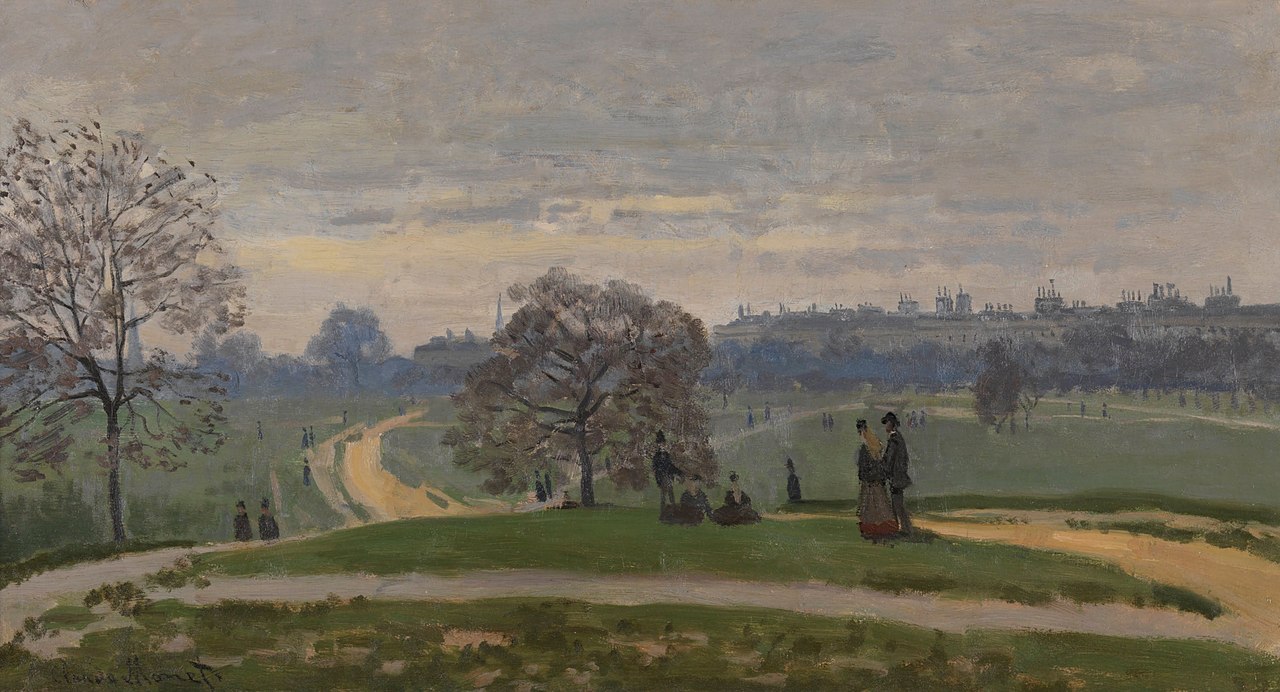 During a recent visit to London, I crossed Russell Square in the evening just as the fountain in its center went silent and the lights were coming on. Over one of the walkways, trees intertwined to create a canopy illumined by floor lighting. Just on the edge, a father, or perhaps an older brother, was holding something to one of these lights and reading it aloud, a child to either side of him. The next day I returned to the spot and found a box with an Alice-in-Wonderland-like aspect affixed to one of the trees. Above its opening hovered a single eye, and below were the words SECRET DIARY OF BLOOMSBURY. Inside was a notebook, filled with notes—love letters to London, impressions of déjà-vu, and professions of admiration for T.S. Eliot—written by those who had stumbled across it.

Typically, people come to London to experience the best of a culture as it manifests itself in its great museums, libraries, and performance venues. London’s green spaces, however, present an allure equally powerful. Indeed, some of the city’s trees have the distinction of being older than London itself—the Totteridge Yew, for one, has been around for over 2,000 years. To put this stunning fact into perspective, in the Evening Standard, self-described guerrilla geographer and explorer Dan Raven-Ellison reminds readers that “everything that has ever happened in London has happened in its lifetime.”

The article is part of a broader London-based campaign, for which Raven-Ellison himself is a driving force, “to get away from the idea that nature is for the countryside and not for cities such as ours.” In July of this year, London became the world’s first National Park City, committing to  “[protecting] the core network of parks and green spaces,” providing its residents and visitors with “high-quality green spaces, clean air, [and] clean waterways,” and to existing as a place “where buildings and public spaces aren’t defined only by stone, brick, concrete, glass and steel”—all with the aim of bringing people closer to nature. The hope is to develop a green-city model that other cities across the globe can replicate, allowing them to also adopt the designation.

It is evident that the National Park City—listen to how those two words sound together in that particular order—is the latest manifestation of a public conversation stretching back to the eighteenth century and earlier, when figures such as Joseph Addison, William Gilpin, and Alexander Pope speculated about the salutary civic influence of landscape on the public consciousness just as the concept of the “English garden” came into vogue. Now that the environmental stakes are a great deal higher, the move to blend indoor and outdoor public spaces is all the more pressing, not only to people’s experience of a city, but also to the many other forms of plant and animal life co-existing in a place as well. To further drive this radical geographical reconceptualization of urban space, organizers in London have created an alternate “wilderness map” of the city featuring its green spaces instead of its streets and human-made monuments.

At present, the bewildering variety of London’s existing gardens, squares, and parks already play an essential part in defining the city’s public spaces. Lest we become romantic with all of the prams, or the bounding leashless purebred dogs, or the teenaged couples mashing themselves together in the unkempt grasses, Iain Sinclair reminds us that the competition between nature and the human-made is formidable and unfolding at a pace that none can deny. A glimpse at the changing skyline originating within the capital’s financial district—also the site of the Londinium, the city’s original settlement—serves as confirmation of this. In an essay from The Last London, Sinclair remarks that “the bared ice dentures of the City skyline on the southern horizon glint with invitation. There is no patch of ground on this earth beyond the reach of that insatiable bite.”

I was thinking of these things as I wandered toward Kings Cross via Gray’s Inn Road and came across open red gates topped with a sculpture featuring a globe interspersed with human figures. The path leading into the space beyond the gates invited me in; its mosaic tiles were flanked by a variety of trees, teeming flowerbeds, beehives, an outdoor oven, solar panels, garden plots and spaces for children to play. There it stood, an improbable offering of peace and abundance, in the middle of the city.

A staff member told me that for over thirty years this has been a place for the community’s members to gather outside their homes and get to know their neighbors—it is an area filled with people of various cultures, income levels, nationalities, religions, and languages. The Calthorpe Community Garden, she told me, had become a welcome place where one can bring both one’s children as well as one’s parents. The multi-generational appeal was clear from the place, where inside its cafe a group of community elderly were in a class cooking the food they had grown in their plots, while children were outside doing something with clay. Adjacent to the property, young people played soccer in a court.

As we were looking in that direction, she remarked on the changes that were to come. Public funding has become more difficult to secure, and a new building will soon be going up next door. I asked about what this might mean for this place—including hours of sunlight for the gardens. Collaboration, she hopes. Plans for the concrete, glass, and steel structure unfold right alongside a garden that serves its growing communities daily in the most palpable ways imaginable—ways that require no box to stow visitors’ secrets, for theirs is an open one for all who know the place best.