Home
»
Uncategorized
»
Half Moon Pose and the Writer’s Split Consciousness 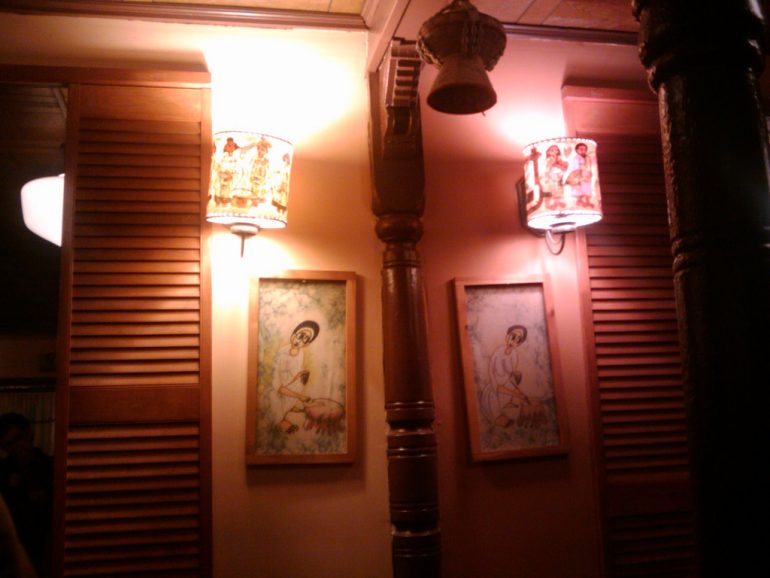 You can get into Half Moon pose in any number of ways, but here’s the sequence I like best:

1. From down dog, lift your right leg, inhale.

2. Step the leg between your hands into a low lunge, exhale.

3. Rise up into Warrior I, inhale.

5. Flip your front palm up, arch back into Peaceful Warrior, inhale.

6. Transfer your weight into the front foot and lift the back leg until it’s parallel with the ground; lower your front hand until it’s planted a few inches in front of your standing leg. Stretch the other hand up toward the sky. Spin the torso open.

Understand: Half Moon is a difficult pose. The trick is that the standing foot—the one bearing all the weight—points forward while the rest of the body rotates open. The pose requires finding stillness in a kind of kinesthetic divide; the body oriented, for a space of seconds, in two directions at once.

Once you’re in the pose, the instructor will begin to cue you to go deeper. Lift your gaze to the ceiling. Hover your fingertips off the ground. Find expansion. See if you can fly.

I can’t lift my gaze or hover my fingertips. After four years of practice I still fall out of the basic pose. My body fights the split; it wants to pick a side.

They say the poses we find most challenging are likely the ones that have the most to teach us.

The first time I remember experiencing what I’ll call the writer’s split consciousness was June 2008. I was an MFA student at Bennington and Amy Hempel was my thesis advisor. In the afternoons, I’d take her dog Wanita running with me. Wannie was a kick-ass running partner—her stamina and speed increased with mileage.

One day I asked Amy if I could take Wanita for a swim in Lake Paran.

Of course, Amy said. She loves the water.

When we reached the lake, I panicked. I was in full protective custody of Amy Hempel’s dog and I’d never let her off-leash before. What if she swam out too far? If I lost her? If she got hit by a car?

As I stood at the edge of the water, addled with worry, tossing Wannie’s water toy and watching her paddle out and back, I thought of a story. A married woman takes a famous actor’s dog (already I was revising) for a walk to Lake Paran. The woman’s friend, a married man, comes along. They hike around the lake and wind up having a tryst, their copulation rushed and awkward, the dog watching, her leash tied around a trunk. But the dog is wearing a gentle leader (revision, again), and knows how to rub her face into the ground to loosen the nose strap. She shrugs off the leader and runs away. The man and woman don’t realize she’s gone until it’s too late.

I didn’t know what would happen next—I would discover that later, on the page—but I did know I needed to pay attention to the moment, to remember. I began tamping down the details: the way Wannie always turned right as she circled back to shore; the pinprick cold of the water on my shins when she shook; the deer flies buzzing, the late-afternoon slant of sunlight over the lake. The bottoming-out sense of losing control when I unhooked her leash.

In that moment—imbibing the real world with my outer eye and translating it into an imagined one with the inner—I felt hyper-awake, expansive. I was living two lives at once.

That day, for a space of minutes, I was able to stay there.

John Gardner, in On Becoming a Novelist, tells the story of happening upon a car wreck in Colorado. It was a gruesome scene—lots of blood—but Gardner’s first thought was I must remember this! I must remember my feelings! He says that what he felt above all was “disgust at my mind’s detachment, its inhumane fascination with the precise way the blood pumped.” Bernard Malamud, Gardner says, would focus intently on people’s gestures as they spoke; he might interrupt a story abruptly to ask why the speaker wore such dark glasses.

For me, the guilt comes at home. Here are my children, acutely alive, but also a hotbed of material that I find myself constantly observing, editing. My youngest daughter will say something about getting her feelings hurt and I’ll hear but not listen; I’m too busy noticing the way she chews on her lower lip. I once asked my youngest son, who speaks with a lisp, to say a certain word over so I could get the sound right on the page.

A few years ago one of my daughters went through an anxiety phase where she was pulling out her hair. I didn’t know about the behavior until her hairdresser showed me the spot. We have a little breakage back here, the stylist said. My daughter was mortified; I was silent, looking at the little cluster of spikes at the back of her head—the tip of a tiny Saguaro, bottlebrush, cat whiskers.

I used the image in a story. I translated the moment into art. But I felt that I’d failed in a much more important way.

Sometimes I’m overwhelmed with nostalgia for my pre-writing days. When my kids were not potential characters; when I could overhear a conversation or see a certain gesture and just let it go. When I could take a yoga class and not keep a notepad under my mat (yeah, I do this.) When everything didn’t feel imbued with potential to say something. Did such a time even exist? (I suspect not.) And if there was such a time, would I go back?

The split consciousness has its gifts. Those moments, translated into fiction, let me access a time I might otherwise have forgotten; not just the way things looked, but the way they felt. Our neighbors used to have a little white dog with matted fur who would bark at us whenever I walked the children home from school. I put that dog in a story. Now, when I read the scene with the white dog, it’s a point-of-entry: the way my four-year-old’s hand felt in mine, the way my daughter’s waist-length hair got twisted up in her backpack straps.

Do the memories make living with the split worth it?

Half Moon pose, if I ever let it, has this to teach me: Your attention is divided. So what? It’s how you’re wired as an artist. Embrace the split. Sit with it. Don’t fight.

While you’re on the yoga mat, you’re supposed to let go of the running story in your head. Thoughts still come; you observe them and let them pass without judgment.

But I’m still a writer, even on the mat. Last week I took a three-hour class from a master teacher from California. He was small and erect, dark-skinned, early 50s but looked a decade younger. He spent the first hour talking. He used fuck and fucking as punctuation. He burped, frequently and loudly. At the end of his talk he said: I’m doing these things because I want you to practice non-judgment.

I’m lying there on my mat thinking, now here’s a character: a verbally abusive yoga teacher—abusive with compassionate intentions. And suddenly I’m paying attention, I’m doing exactly what I’m not supposed to be doing, I’m opening my eyes to note his shirt, his cargo shorts, the way his toes angle outward. I watch him shake his head at the muscle guys in the class, the ones who are quivering all over in forearm plank but still lifting a back leg.

Put your fucking knees down, he says to one of them.