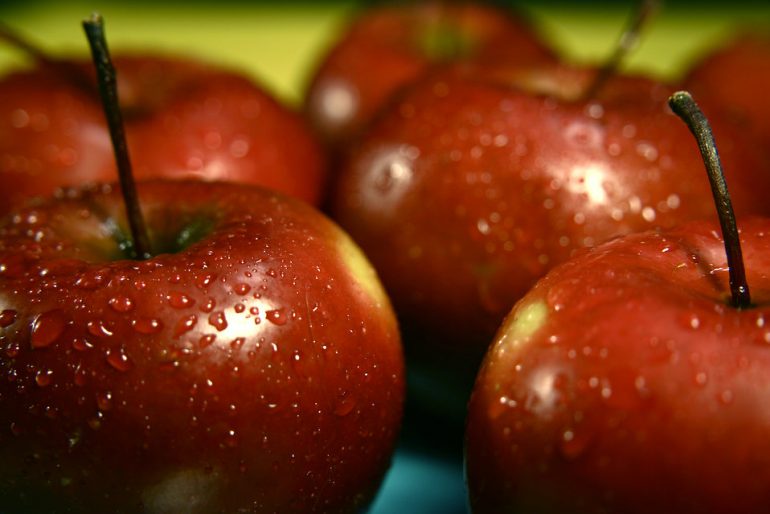 I happened to read Natalie Diaz’s book When My Brother Was an Aztec (Copper Canyon Press, 2012) on July Fourth, and it was a surreal experience. I live on small lake in Massachusetts, and as the neighbors blasted the sky with exploding light I wondered about the Wampanoags who lived here before us, what happened to them, so I looked it up. It’s ugly, of course. I’m not here to patronize you with a history lecture about the brutality of manifest destiny in action, though, and neither is Diaz.

Instead, When My Brother Was an Aztec offers a portrait of life on the Mojave reservation today, and it’s bright with color, coral and turquoise, the red of apples, and every kind of hunger. She shows us cans of government food, handed-down clothes, alcoholism, drug addiction, and lost limbs— the place where history has brought us.

PC: I read the title poem as a metaphor for the rest of the book. Talk about what the Aztecs represent to you.

ND: Sometimes people are overwhelmed by the violence in my poems. I guess, when we see someone’s heart ripped out, we tend to look away—we question why we had to see it. I do not deny that violence, not in real life or in my work. I cannot unsee what I’ve seen. But I hope my poems also remind people of the humanity that exists in the midst of it.

Some Aztec practices can be interpreted as violent, but that doesn’t mean they were less human. They wrestled fear, absence, and loss like the rest of us. They held each other tenderly and made love. They were not monsters, just lived in a world different from ours. Violence is painful, but it is also a beautiful and functioning part of our lives. It has to be. We don’t stop at violence—at least not in the world I live in—we begin over and over again out of it. This is one reason why the rituals and beliefs of the Aztecs lure me—they made light from violence, or found light despite violence, which doesn’t happen if you close your eyes.

PC: There are several images that are woven into the poems throughout the book: the color red, apples, missing limbs, teeth (or biting). Tell me about the significance of these images to you.

ND: I filter the world through colors, and red is the color that overwhelms me most often.

The image of the amputee haunts many natives. I was close to my great grandmother, Lona Barrackman, a double-amputee. I don’t remember her ever having legs. I knew and loved her only from her bed, holding her hands, rubbing her invisible legs—she imagined them still there. The parts of her that were gone turned the parts of her that were there electric.  Through her, I learned to see the body as a blessing, an altar, even. I know how to appreciate its presence because of her.

PC: Have you considered writing a memoir? Why did you choose poetry as your genre?

ND: I know the definition of memoir is fluid, but at thirty-three, what do I know about anything? Maybe only that this world is one I sometimes cannot face in the morning. It will not stop conquering me. It has me by the throat most mornings, by the horns most nights. Poetry is where I come to because it doesn’t require me to have answers—poetry is the question. Maybe, it’s like a prayer in that regard.

PC: The book is a hard read, emotionally, and there’s definitely no light at the end of the final poem, “A Wild Life Zoo.” Could you talk about that poem?

ND: The poem reminds me I am not a victim. I am part of the zoo, one of the beasts. It says, Natalie, you’ve flung your share of shit. You have no right to write any of this. You have every right to write all of this—you know these cages as good as, if not better, than any other animal here. But at the end, I’m ringing my bowl against the cage. I can still hear the echo of that ringing, and that is something like light.

PC: I know that you’re working to revitalize the Mojave language. What does that work look like? Is it inspiring new poems?

ND: Mojave language work is empowering. It is a reversal of sorts. It is like rounding up a bunch of English words at night and tying them together behind a horse and dragging them away (which was done to our Mojave people). It looks like stripping them down, cutting their hair, and demanding, What do you mean? Shouting, We don’t understand you. Then, starving them, until we can see their bones, then asking, Is that what you mean? But we don’t wait for their answer. We answer for them, You aren’t who you say you are. You are who we say you are, or you are nothing. Finally, we relearn what our Elders have meant their whole lives: birds cry instead of sing, kissing is falling into the mouth of another, making love is a hummingbird, the milky way is the trail of the Mojave salmon across the night.

PC: Do you have a favorite, lesser-known, female poet?

ND: There are many emerging female poets whose words I keep my eyes wide open for, who I think others should not sleep on: Layli Long Soldier, Ashaki Jackson, Kelly Forsythe, Hafizah Geter, and Rebecca Lauren, to name a few. In Mojave, the word for lightning is huurav, and I think each of these poets has that, huurav, in their poems. There is a cracking open. A bright hot something fearless in lighting up an image or an emotion. If poetry is bread, then Layli, Ashaki, Kelly, Hafizah, and Rebecca are frybread—their work will fill you up and make your mouth shiny. And as with all good frybread, when their first books come out, I’ll be the first in line to buy them.

I Lean Out the Window and She Nods Off in Bed, the Needle Gently Rocking on the Bedside Table

While she sleeps, I paint
Valencia oranges across her skin,
seven times the color orange,
a bright tree glittering the limestone grotto of her clavicle—
heaving bonfires pulsing each pale limb
like Nero’s condemned heretics sparking along Via Appia.

A small stream of Prussian blue I’ve trickled
down her bicep. A fat red nasturtium
eddies her inner elbow.

Against her swollen palms,
I’ve brushed glowing halves of avocados
lamping like bell-hipped women in ecstasy.

A wounded Saint Teresa sketched to each breast.

Her navel is a charcoal bowl of figs,
all stem thick with sour milk and gowned
in taffeta the color of bruises.

This is to offer up with our flophouse prayers—

God created us with absence
in our hands, but we will not return that way.
Not now, when we are both so capable of growing full
on banquets embroidered by Lorca’s gypsy nun.

She sleeps, gone to the needle’s gentle rocking,
and I lean out the window, a Horus
drunk on my own scent
and midnight’s slow drip of stars.

She has always been more orchard than loved,
I, more bite than mouth.

So much is empty in this hour—
the spoon, still warm, lost in the sheets,
the candle’s yellow-white thorn of flame,
and night, open as autumn’s unfilled basket
as the locusts feast the field.

“I Lean Out the Window and She Nods Off in Bed, the Needle Gently Rocking on the Bedside Table” by Natalie Diaz, appears in When My Brother Was An Aztec (2012) and is used by permission of Copper Canyon Press. It also appeared in Narrative Magazine, Spring 2012.

Bio: Natalie Diaz was born and raised on the Fort Mojave Indian Reservation in Needles, California. Having played professional basketball for four years in western Europe and Asia, Diaz returned to the states to complete her MFA at Old Dominion University in 2007. She has received the Nimrod/Hardman Pablo Neruda Prize and her work has appeared in numerous journals and magazines, including Prairie Schooner, Nimrod International, and North American Review. She lives in Surprise, Arizona.