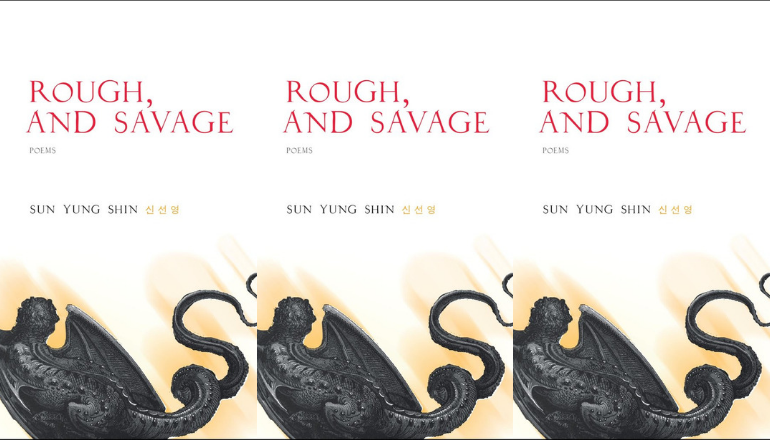 I was fifteen when I decided I would make myself appreciate Emily Dickinson. One summer afternoon I sat down on my bedroom floor with a small book of Dickinson poems I’d been given as a gift and a dictionary. I’d never looked up so many words (I was not yet a literary girl). I began to feel that the dictionary was a map to buried treasure, that each margin-scribbled definition was one task solved in a quest toward poetic enlightenment.

Twenty-five years and two word-working degrees later, I opened up Sun Yung Shin’s first book Skirt Full of Black, and a feeling of déjà vu transported me back to that Dickinson day. In other words, I read Shin’s book with a dictionary by my side, hoping that it held the key to unlocking difficult passages. But as Shin’s work illustrates time and again, the key doesn’t always fit the lock; sometimes there are a dozen keys, or none. Sometimes there is no door.

In Skirt Full of Black, Shin weaves personal history with government documents, Korean tourist texts, fairy tales, and fragmented conversation in such a way that the reader is continually second-guessing, re-reading, making leaps as person might if she found herself living in a new country, acquiring a new language:

[silence in | of translation] [transcription of| in infancy]

All this because, after all, the train wreck speaks for itself, does it not?

from “Kyop’o (Overseas Korean) on Location”

Check out Thomas Cook’s great review of Skirt Full of Black at Luna: A Journal of Poetry and Translation if you want to read more about Shin’s stunning first book.

I caught up with Shin to ask her about her second book of poetry, Rough, and Savage, forthcoming from Coffee House Press this fall.

PC: Tell me about the title of your new book. That extra comma makes me curious.

SYS: The title is taken from the wonderful Robert Pinsky verse translation of the Inferno. The phrase is taken from the first and second stanza of the first Canto as translated by him, so there’s a stanza break between “rough” and “And savage” so I played with a variety of ways of breaking or not breaking the phrase. The enjambed “and tangled and rough / and savage” creates such an energetic forceful movement with its iambic meter. I’ve looked at several translations and they vary so widely and interestingly. “Tangle” is apparently from Old Norse þongull or seaweed.

Languages and language interest me greatly and so it’s been a joy to spend a little time considering issues of translation, even as a total amateur. My experience with Italian has been through the words to describe tempo in Western music as I grew up taking piano and ballet lessons. The word rough is Germanic in origin and the word savage is actually related to the Latin word for forest (silva) which is how we get the English word sylvan.

My early exposure to Latin is from being raised Roman Catholic. English is fascinating with its mix of, among other sources, Latin and Anglo-Saxon: “rough, and savage” and the vowel sounds in “rough, and savage” starts up in pitch with “rough”, goes down with “and”, goes up slightly with “sav-” and goes way down with “age”. I thought it was very musical as well as little bit of a microcosm of the Inferno, which has the medieval Roman Catholic world (Dante) encountering the classical “pagan” world (Virgil). Anyway, the original Italian is:

The Pinsky translation is not line for line:

Midway on our life’s journey, I found myself  In dark woods, the right road lost.
To tell  About those woods is hard—so tangled and rough

And savage that thinking of it now, I feel  The old fear stirring: death is hardly more bitter.  And yet, to treat the good I found there as well

So you can see here from the original that “selva selvaggia” or, forest savage creates sonic repetition from the root word and its derivative. “Aspra” seems to have many connotations from rough to bitter to abrasive, etc. “Forte” is of course strong.

PC: Is having two poetry books like having two children, so that you could never choose which you love the most?

SYS: I’m not sure yet, since the new one hasn’t come out. It’s maybe more like houses or apartments you used to live in? Like, I lived in that house for a while, and it was really a shelter as well as posed its own challenges-to-live-in, but now I’m living in this house and making it and trying to understand what it’s asking of me, and how I can serve it, and all that. As far as the comparison to children, I do hope I’m a somewhat “better writer” for this book just like I think I learned a few things about parenting with my first child that I tried to apply to the second. But of course since they’re two very different people it’s sort of like starting all over again.

PC: How are your books different thematically? Was the writing process different?

SYS: Skirt Full of Black is perhaps more about exploring the eros and trauma of what could be called the untexted and Rough, and Savage is, I think, more about the kind of underworld of organized violence that we live in as beings that have evolved to wage war, “own” territory, use money, subjugate each other… I think the writing process was fairly similar. Poems tend to come in groups, sort of few and far between. I used source material and history and myth and religion with both. Both have this kind of haunted, ghostly archetypal family floating through it.

PC: I saw that you were on an adoption panel at AWP. Are you comfortable talking about your adoption and its role in your writing?

SYS: Sort of. I can talk about it, but it’s really complicated! I guess the short version would be that being adopted has helped me see/experience human families (and race, and gender, and religion…) as constructions, even theater. For better and worse. The condition of being adopted has influenced many aspects of my reckoning of what it is to be human, from cultural inheritance, to food politics, to the body and its attachments and traumas. So all that goes into my writing.

PC: Where does a poem begin for you? Do you start with a road map or do you let the poem take you where it wants to go?

SYS: I usually start with an image or a fragment of text from something else, such as a fairy tale or something from a religious text (not so different from each other of course). It could be something I’ve been pondering for years or decades even.

I don’t usually have a road map but sometimes I do have an idea for a larger structure, or maybe in the revision process. In my new book I have a persona poem written in the voice of Satan and it’s in sections with each section titled for some dimension of his identity or role, such as “fugitive” or “the slanderer” or “the scapegoat.” So, some longer poems have sections for those reasons.

PC: I can’t wait to read that poem! I’d like to introduce the blog readers to lesser known, no longer living, female poets. Do you have a favorite?

SYS: What a great question. The first person that comes to mind is Theresa Hak Kyung Cha, 1951 – 1982). She’s not really lesser known in certain circles but definitely in terms of an American mainstream.

PC: Kyung Cha was quite a Renaissance woman! I had not heard of her, but I can see similar threads in your work: exile, displacement, the use of mixed media to look at a question from more than one direction. I look forward to learning more about Kyung Cha’s work as well as reading Rough, and Savage.

Sun Yung Shin’s second collection of poetry, Rough, and Savage, is forthcoming from Coffee House Press in fall 2012. She is the author of Skirt Full of Black, winner of the 2008 Asian American Literary Award for poetry; co-editor of Outsiders Within: Writing on Transracial Adoption; and author of Cooper’s Lesson, a bilingual Korean/English book for young readers.