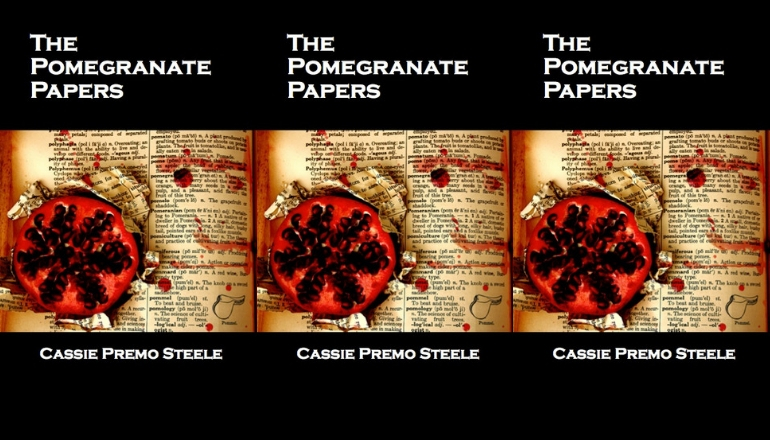 As the recent VIDA graphs all too clearly indicate, there’s a wide disparity between the number of men and the number of women published in well-known literary journals.

One explanation for the lack of women’s voices in literature may be that so many of us tend to our careers in the small gaps between making meals, wiping bums and noses, re-directing tantrums, and cheering on small, chubby-legged soccer stars. In fact, as I write this I keep one eye on the clock ticking away the few hours of my son’s time at preschool.

Cassie Premo Steele captures many of these unspoken truths in her mostly-autobiographical book of poetry, The Pomegranate Papers , released this week by Unbound Content. In the spirit of a big sister sharing her knowledge, The Pomegranate Papers tells the story of motherhood’s moment-to-moment balance between the gifts our children bring us and the way we lose those same children, as well as our partners, independence, ourselves. She writes:

I long again for summer, the heavy hard
sweat of you, and then the fall, the
pungent pickled weight of you . . .

. . . The song we sing is my
lament, your celebration, as it is
for ever after: your happiness
leaves a tiny worm that feeds
upon the apple of my heart. (from “Spring Again”)

The fruit in the book’s title reflects the constant negotiation and compromise that is motherhood. “The pomegranate is what Persephone eats when she is in the underworld,” Premo Steele said. “. . . [The myth is] a story of the origin of seasons, but also about the way women balance their allegiances to their families of origin and the families they create.”

. . . And just when the bronze
jars, filled with my tears,
thick as honey,
were to overflow,
the old woman came
to tell me I must spill them.
And where they flowed
would grow poppies. (from “Demeter”)

At 125 pages, The Pomegranate Papers is no small poetic feat. Premo Steele’s daughter and step-daughter are older now, but I asked her how she balanced her time between writing about pregnancy, birth, and the early days of motherhood with the actual living of it.

“I would have a Boppy in my lap, nurse my daughter on the left breast, and prop my journal on the right to write,” Premo Steele said. “[My daughter] would often sing a little humming tune when her belly was full, so it was a lovely time . . . As she grew, I wrote more while a babysitter came to the house for two hours each Friday. The sense of loss, even in those two hours, informed the poems.”

Premo Steele learned to manage her time well. In addition to having nine books under her Boppy, she writes a column titled “Birthing the Mother Writer” for Literary Mama and works as a writing and creativity coach from her home in South Carolina. Her book tour, funded through Kickstarter, begins this month and will take her across the country.

There are no easy answers to the questions VIDA raises, just as there are no shortcuts around the steep and craggy path that women writers blaze. We have many obstacles to negotiate, and they don’t always include motherhood; VIDA’s count makes this clear.

This series of blog posts will continue to explore the myriad ways women push against these boundaries, connected by a fierce and quenchless desire to write their lives into verse.