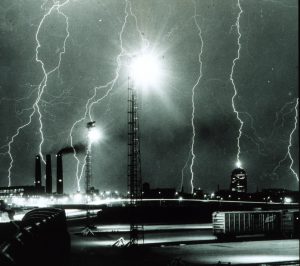 Lightning Rods, Helen DeWitt’s 2011 follow up to her critically acclaimed novel The Last Samurai, satirizes not just the “sexual harassment problem” in white collar offices, but a business culture that puts a premium on cutthroat masculinity. In between unsuccessful sales calls, Joe, a failing vacuum salesman, wallows in his trailer, abusing himself to a fantasy of a woman “being penally challenged” from behind with the upper half of her body on the other side of a wall. It is this fantasy that eventually leads Joe to his million dollar idea: a panel cut out of the disabled stall in office bathrooms that prevents sexual harassment in the office by providing a lightning rod, or hybrid clerical-sex worker, for the gratification of a company’s top earners.

Joe is as meticulous in his masturbatory fantasies as he is with his business. He hires highly qualified administrators open to serving as lightning rods, anonymously offering their back end through the panel in the bathroom wall to a male coworker. He designs a computer program that simultaneously and discreetly alerts the male and female components of the lightning rod program that it’s their turn to make use of the facilities. Through an averted Equal Employment Opportunity lawsuit, he provides PVC tights to guarantee that lightning rods of all colors have the opportunity to remain anonymous while doubling their salary for adding sexual services to their clerical resumes. Like any good salesman, Joe is ingenious and single-minded in his belief in his product. He’s a better salesman than he thinks, and demand for this controversial product takes off.

There are problems with the lightning rods, of course. Joe sets out to find the “one woman in a thousand” who understands that her sexual encounters with the salesmen in her office is the moral equivalent of going to the bathroom. Many women find themselves inadequately prepared by Joe for office sex work and others are taken advantage of—male employees may try to assuage the mandatory condom use or may spank a lightning rod in the heat of passion. The two notable exceptions to the lightning rod problem are Lucille and Renee, both of whom are as qualified and cutthroat as the men they service. “The longer you work, the more you realize how many people can’t deal with things” Lucille opines. “Even if they’re paid to deal with them, they still can’t deal with them. So that somebody who just does what they’re paid to do really stands out.” Lucille uses the money she saves as a lightning rod to enroll in law school and eventually becomes a successful litigation attorney; Renee reads Proust on the other side of the bathroom wall and eventually becomes a Supreme Court justice.

But the problem with their ultimate success is that they must engage in the masculinist morass of the business world in order to succeed. Lucille, Renee, and the other women are intelligent and highly skilled, but the careers open to them are the low-paying, often invisible, and primarily female work of secretaries, receptionists, and personal assistants. Joe is committed to the idea that lightning rods work in the office just as any other clerical employee would. Similar to Mary Gaitskill’s 1988 short story “Secretary,” the degradation of clerical work in Lightning Rods is easily extrapolated into a sexual fantasy: the secretary is there to serve your every need. But in the case of DeWitt’s novel, the lightning rods lead to a healthier work environment outside of the disabled toilet.

DeWitt’s singular comprehension of the deeply embedded connotations of everyday language is as apparent in Lightning Rods as in her earlier novels. Every character expresses himself in the hollow business-speak of corporate America. Characters obsess about productivity and assets, and explicit sexual acts are described with the same clenched jaw authority as a middle manager trying too hard to be chummy with his underlings. The end result is not a skewering of the obviously empty language of the business world, but a defiling of it and the men who use it, one that rivals the defiling of the women in Joe’s fantasies.

The lightning rods are aptly named. Not only do they divert the unwanted sexual advances of men away from female coworkers, they also obscure the larger problem they were hired to solve. According to Joe, the solution for sexual harassment is not changing the culture of the contemporary workplace—or of capitalism itself—but indulging it. “We know that a high level of testosterone is inseparable from the drive that produces results,” Joe claims in a sales presentation to the CEO of the first company to implement a lightning rod system. “Speaking of people as they are rather than as they should be, I know that a high-testosterone-level individual has a high likelihood of being sexually aggressive.” Lightning rod interactions are doled out to the most successful earners in the company, becoming as much a reward for the likelihood of sexual predation as a buttress against it.

In DeWitt’s novel, corporate America is an easy proxy for the larger world exposed in recent allegations in Hollywood and beyond, a world in which sexual misconduct is an unfortunate side effect of a results-driven, male personality wholly suited for success in late capitalism. As more and more women come forward with their own stories of abuse, a portrait of a larger system of power and oppression comes into focus, one that is not so distant from DeWitt’s satire.