Home
»
Uncategorized
»
The Ploughshares Round-Down: Hey Poets. Get in the News.

YOU GUYS. On January 29th, headlines declared that a poetry-loving schoolteacher in Russia killed his friend for asserting that prose was “the only real literature.” (Read the (short) story here.) Um. This is not how you should get in the news.

But neither is this: in response to the poetry murder, the Huffington Post ran a rhymed and metered writeup on it. Although poetry is a well-established response to death, HuffPost’s writer equated “poetry” with “cutesy rhymes.” In doing so, her writeup merely trivialized a tragic death. 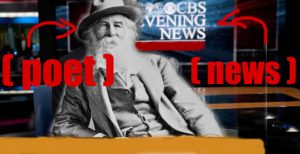 o reaffirmed the boundary we often draw between poetry and (legitimate) news. When was the last time you looked to poetry for the latest headlines? Or to the news for great verse?

These questions sound crazy, but what if this poetry/news boundary exists not because the two can’t mix, but because we poets just haven’t yet pushed the status quo—allowing poetry and the news to meet without harming each other? 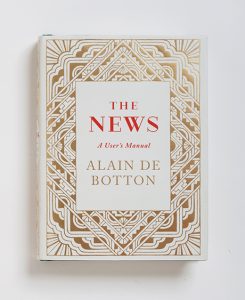 To help answer this question, I turned to Alain de Botton, bestselling author of Status Anxiety and How Proust Can Change Your Life. Today he releases The News: A User’s Manual — a guide to how the news affects us, and how we might become more reflective readers/consumers. Even better: leading up to this new book, de Botton launched The Philosophers’ Mail: a rival to the UK’s Daily Mail, written and produced entirely by philosophers.

This isn’t a case of elitist philosophers separating themselves from the masses. Instead, it unabashedly reports the same kinds of stories as The Daily Mail, like the fact that Anne Hathaway took her dog for a walk, or that Simon Cowell’s on vacation. Covering such stories is part of the point, which is “to read and caption the news with an eye to traditional central philosophical concerns—for compassion, truth, justice, complexity, calm, empathy and wisdom.” 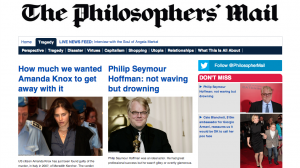 But what does this have to do with poets? The Philosophers’ Mail was immediately well-received, getting over 3 million hits its first day. Um. Apparently, there’s been an unmet demand for reflection and thoughtful commentary on news media, for work that reminds us of our highest aspirations without ridiculing the apparently banal narratives to which we’re constantly drawn via social media, a 24-hour news cycle. Hey poets: pay attention.

1. Stop running from the banal.

The same voice that tells us we should be embarrassed by any interest in celebrities or TV shows keeps us from taking these seriously as points of departure for poetry. Imma punch that voice in the throat.

Yes, poets have been good at embracing the banal when it comes to eating, working, sweating, aging, doing dishes. But when it comes to the latest arrest, political scandal, awards show, or TV episode of whatever, we often recoil in disdain or fear. Why?

The Philosophers’ Mail accepts as its starting point that in Western culture, we’re drawn to (over)consume the news—much of which is hardly newsworthy. Rather than criticize this fact and claim some higher path, The Philosophers’ Mail asks why: engaging the stories to see what they might tell us about ourselves. How might poets (and other writers) also embrace “the news” as a point of departure? According to de Botton:

News is not simply information about what is happening in the world. It is one of the key places where we daily shape our underlying assumptions about life—about what is important, admirable, scandalous, normal; where we rehearse attitudes to fear, hope, good and evil.

2. Write (About) the News You Think Should Be Heard.

I asked de Botton what he believes to be the role of creative writers in navigating the news, and he replied that we’re important because people don’t just need information. Rather, they need it

to come alive in their imaginations, and this requires art… We’re not just data processing machines. We need to be seduced into accepting or getting interested in information.

If you’re like me, you might bristle at the implication that creative writing should be employed at the service of the news: a kind of clickbait to seduce consumers. But if we think of de Botton’s “information” more broadly (as in, “things we want people to know or consider”), we may see a way to rethink our engagement with the stories around us. 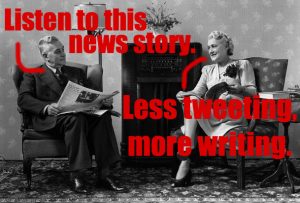 For example, what news stories are resonating with you, right now—regardless of how widely they’re being reported? What are you tweeting or status-updating about? Could you write poetry that addresses, contextualizes, reimagines it?

I’m not suggesting that every time we come across an interesting or emotional news item, we should shove it into a poem or story. Ew. But it’s worth questioning our reluctance to align our Writing Selves with our News-Consuming Selves. If we keep returning to certain news stories, but failing to see them as worthwhile poetic subjects, why?

3. Think outside the book. And the poem.

The Philosophers’ Mail is a complement to de Botton’s book: it’s both news outlet and news commentary. But it’s not just supplemental PR for de Botton: read his Twitter feed, and it’s clear he’s enjoying this project just as much as his book.

How might writers similarly work outside of our books, or even our individual poems? There may be a thread or general concept throughout our works that can find expression outside the intial poems or narratives we’ve composed.

This isn’t to say that our writing itself isn’t powerful (enough)! The point is simply that we may have arbitrarily limited the activities we associate with “poets,” and thus limited the ways we engage the world around us. The answer may be different for each of us, but it’s worth asking: what else can we create?

While the world may seem less and less interested in anything that’s not making headlines (like poetry), the success of The Philosophers’ Mail reminds us that readers may actually be sensing more and more their need for quality reflection. If we put our writing where it can be found, it can create space and motivation for complex, empathic, reflective thought.

And ironically, our work may do this particularly well if it intentionally engages the news that bludgeons us all. By artistically identifying and contemplating the value the news does (and doesn’t) provide, creative writers can offer grounding contexts for the stories and soundbites that send us reeling.

What news stories are you following and/or sharing right now?

How do you handle information overload? Do you have a plan/method?

What poets/authors are engaging the news in significant ways?