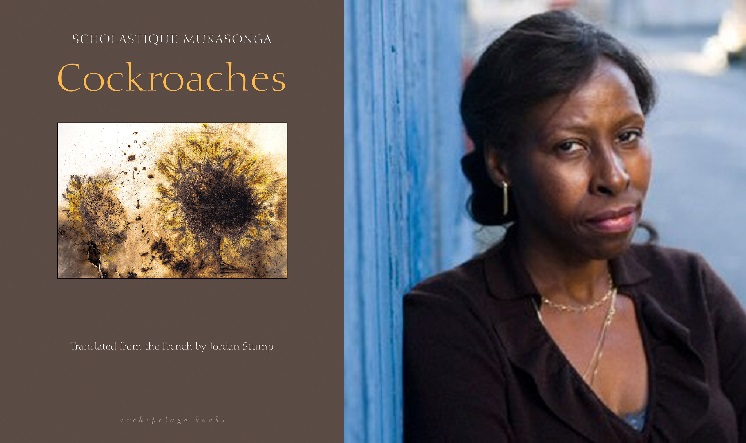 Scholastique Mukasonga’s Cockroaches, which was published by Archipelago Books on October 4, is a painful book. Mukasonga escaped Rwanda just before the genocide began, eventually making her way to France where she worked as a social worker. Cockroaches is her first book, originally published in French in 2006. It’s a chronicling of her life leading up to the Rwandan genocide and the time period just after. Twenty-seven members of her family were killed, including her mother. The details within are gruesome, difficult, and thoroughly rendered.

Cockroaches’ translator Dr. Jordan Stump has an impressive résumé. He’s translated works by Honoré de Balzac, Jules Verne, Nobel Prize winner Patrick Modiano, and the French-Senegalese writer Marie NDiaye whose recent novel Ladivine is quite the read (my review here). In 2001, his translation work earned him the French-American Foundation’s translation prize, and in 2006 he was named Chevalier de l’Ordre des Arts et des Lettres. He’s a professor of French at UNL and has written two books of his own, The Other Book: Bewilderments of Fiction and Naming and Unnaming: On Raymond Queneau.

Graham Oliver: I looked over your most recent translation projects and I saw Balzac next to NDiaye, and then Mukasonga this year. That’s quite a range. Can you speak some to the different challenges these three speakers of the same language offer, given both their geographic and chronological differences?

Jordan Stump: I actually quite like doing two or three very different translation projects at once: it’s sort of invigorating to think in more than one voice at the same time, and often, oddly, a good phrase for one translation will come to me while I’m working on another. Needless to say, you’ve got to be very aware of everything that separates those voices, but in my experience that actually becomes clearer when they’re so closely juxtaposed in your mind.

GO: In Cockroaches, I was struck by the very matter-of-fact tone that Mukasonga uses while writing about horrific events. Was that something you had to really work to move from French to English? How does that tone stand out differently in the two languages?

JS: Mukasonga’s voice is a delicate, tricky thing. It’s quiet and understated, but it’s not flat; it can be intensely moving, but it’s not exactly poetic, lyrical, eloquent. Matter-of-fact, as you say, with a little bit of a lilt sometimes, and through tears or clenched teeth at others. This was her first book, written at a time when she had no real ambitions to be a writer; it’s almost more an act of memory than an act of literary creation. For that reason, the translator has to hold back his or her poetic tendencies, which can be difficult in the horrific passages toward the end. Harder than that, though, is making sure that the plainness of the voice doesn’t turn into blandness. Like any other tone, Mukasonga’s requires endless revision to get right, and even then, you’re never quite sure if you’ve got it or not: French and English simply sound different, and there’s nothing to be done about it.

GO: Beyond her often relatively affectless tone, Mukasonga also makes some moves in the text that read like oral storytelling, things like “But I’ll save that for later.” Can you talk about how those types of comments read in French versus English?

JS: Interesting question. In the case you’ve cited, she says “Mais de cela je parlerai plus tard,” which underscores the oral feeling even more. Elsewhere, I think I followed her lead more closely: “Comme je l’ai déjà dit” becomes “As I say,” “C’est maintenant que je dois parler de Jeanne” is “Now I have to talk about Jeanne,” etc. There’s a real dual quality to the book: very “written” from one point of view (the chapter titles, the carefully shaped chapter endings, etc.), but at the same time very spontaneous. It certainly doesn’t read like a transcription of an oral testimonial—and most certainly shouldn’t be made to sound like that—but at the same time it’s very clearly the product of a mind actively and immediately remembering, and so has to retain that same discursive quality.

GO: Was your decision to keep non-French words a straight 1:1 conversion (if it wasn’t in French in the original it didn’t go to English in the translation) or did you make any changes with that? If so, why?

JS: No, just a straight 1:1. Her frequent use of words in Kinyarwanda is very moving, I think: remembering the words people used in what’s now a far-away land for her is an important act of memory, as well as a kind of sensual delight. Very important, I think, to see her use of those words as sacred. Which poses another question: to italicize or not? She generally doesn’t, which makes the word seem more immediate. I will confess that I did indeed italicize them, after much agonizing, knowing full well that the italics distance the words from the reader. I didn’t want to, and then, rereading a draft, I decided it had to be done—paradoxically, the effect of those words felt diluted without the italics.

GO: Do you have a sense of the difference in how this type of memoir about a colonized country is received/engaged with in Europe/France versus the United States? I know there’s only a couple of reviews of the English version out there right now, so there’s not much to draw from.

JS: I’m not really sure the difference is that great. Looking at reactions to this book and others like it, both in published reviews and in sources like Goodreads.com, it seems to me like French readers pay a little more attention to questions of style, and Americans are a bit more focused on the emotional toll—they use words like “life-changing” a lot more often. But really, it seems to me that it’s a pretty slight difference.

GO: Give us some recommendations. What books have you run into that you’re surprised haven’t been translated yet? What upcoming translations are you excited about?

Check out a short excerpt from Cockroaches over at Tin House‘s Open Bar.