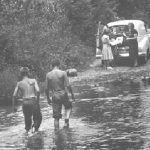 “Bookmobiles are not strangers to the ‘back trails,’ and out of the way places—indeed do they seek them out in their travels, for the people who live there have no public libraries.” Earl Palmer Appalachian Photograph and Artifact Collection (1880-1889) MS 89-025 Special Collections, Digital Library and Archives, University Libraries, Virginia Polytechnic Institute and State University.

Madison County, North Carolina contains roughly 450 square miles of the oldest mountains in the world, with sharply pitched forested slopes, grassy balds, rocky ridges, and swift creeks typical of the Southern Appalachian highlands. Its people, nearly all of them of long-rooted Scots-Irish descent, share a gentle way of talking which belies their fierce independence. Their isolation and self-sufficient way of living found, until recently, much unchanged from a hundred years before. Subsistence farming was a way of life, with electricity, running water, and indoor plumbing conveniences not found in towns until the last few decades of the 20th century.

Residents of the southern Appalachian mountains have always borne a deep respect for the Book. This veneration is evident in each cracked leather-bound volume carefully passed down generation to generation, in every gilded title that appears to float just beneath the surface of the spine. Church denominations here splinter according to which translation of the Holy Book (King James, New International, or New Revised Standard) is considered acceptable, the words found within their pages inviolable. The poetry of hymns and century-old ballads are known by heart; but it took the stouthearted women of the bookmobile to teach these mountain people to read.

Like the WPA Pack Horse Library that served the mountains of depression-era West Virginia, the bookmobiles of the Southern Appalachians were a homegrown affair. Madison County’s first library bookmobile, a 1947 Ford truck, launched in 1955 over steep curved roads that were mostly unpaved and often single lane, with the indomitable Peggy Dotterer at the wheel. She quickly developed a route that covered over a thousand rugged miles per month, and brought books to nearly 130 separate locations. Stops were scheduled at, for instance, “Miss Isensey’s mailbox,” “Old Log Cabin,” “Bud Shelton’s Store,” and “Middle Laurel Church of God.” Library patrons walked for miles to reach these locations, which were altered over the years as Mrs. Dotterer learned where books were most likely to be read.

From the very start, Mrs. Dotterer was aware that her mission was two-fold. She first had to introduce the idea of reading as a pleasurable pastime to a hardworking, independent people, and then she had to convince the readers that their reading needs could be met by the bookmobile. As progressive reformers from John Dewey onward have said, the use of books as tools for sharing public information is not inevitable. It is a system that must be constructed, as historian Derek Attig points out in his dissertation, “Here Comes the Bookmobile: Public Culture and the Shape of Belonging” (University of Illinois at Urbana-Champaign, 2014). The role of a library, in the progressive era, became that of public distribution rather than public storage.

Bookmobiles did more than simply introduce readers to books. They also served as a medium for news to be carried from one mountain cove to another, a direct connection to the larger community. For rural people, women and children in particular, the bookmobile and its books were glimpses into people and places they were unlikely to come across in their daily life.

In order to set her potential readers at ease, the “bookmobile lady” was quick to share a meal, help out with chores, and to sit and visit with the women she met along her route. Often, Mrs. Dotterer recalled, husbands resented the time reading might take from their wife’s chores; she learned which houses to avoid when the husband’s truck was parked in the yard. She wore “dungarees, a thick jacket, and high-topped men’s work shoes” both as a practical measure, and to prevent less-educated women from being intimidated by her presence. As a Madison County native, she respected how painfully proud mountain women could be. The books she brought, often purchased with state funds or borrowed from the state library in Raleigh, were selected based on what she thought her readers would want to read—if, “maybe not books the state would approve of.” The selections tended towards popular fiction, often with overtly religious themes, though she was proud when the novels of Sinclair Lewis became popular in the early 1960s, noting—possibly for her funders’ benefit—that it showed an increase in readers’ sophistication (“We Had Done Wonderfully Well…Considering: The Development of Public Library Service in Madison County NC.” Pauline Binkley Cheek, 1976).

“Everybody loved the bookmobile lady,” librarian Peggy Goforth told me recently. She grew up in the Big Pine region of Madison County, and recalls hearing the bookmobile’s monthly route grind its way up the gravel roads of her childhood. The bookmobile itself was more memorable to her than the woman driving it—“Blue Cloud” is what it was called, the final bookmobile to have a regular county-wide route. She remembers the lady who always met the bookmobile with her pillowcase full of books to return, to fill again with fresh reading. “There were those who’d want to keep their books in a poke,” or sack, in order to be discreet, she said.

Elsewhere in the south, bookmobiles were used to maintain the separate spaces of the Jim Crow era, but the bookmobile of this rural mountain county served its few black patrons as it did any other resident, making regular stops at what was then called “the Negro Church” in Mars Hill. It’s worth noting that in this largely Scots-Irish population, ancestral feuds between Protestants and Roman Catholics harbored more fervent condemnation than racial prejudice at this time.

The purpose that the bookmobile served above all was the building of a common culture between a people who tended towards narrowly regional division. The contract implicit in a library’s function is that of a citizenship in a shared community. A bookmobile’s books are owned not by any individual, but by a community; they are borrowed, used, cared for, and returned. The reader’s name is inscribed upon the book, creating commonalities with unseen others, locating similar interests between those who might not have anticipated such.

The bookmobile eventually gave way to the establishment of library branches and the increased mobility of rural residents. However, in recent years a bookmobile served the Hispanic communities in ways that mimic the bookmobiles of years gone by, its patronage largely women and children who may not drive or have fluency in English, and who may find the institutional setting of a public library intimidating. The bookmobile could even be seen as a forerunner of the hopes for the infinite library found online, the vastest of repositories made accessible to all. Early proponents of internet access used bookmobiles to generate enthusiasm for online access, as with the Internet Archive Bookmobile. Now a generation may be more likely to read texts than novels, and yet, there’s still “something about a book” that calls them.