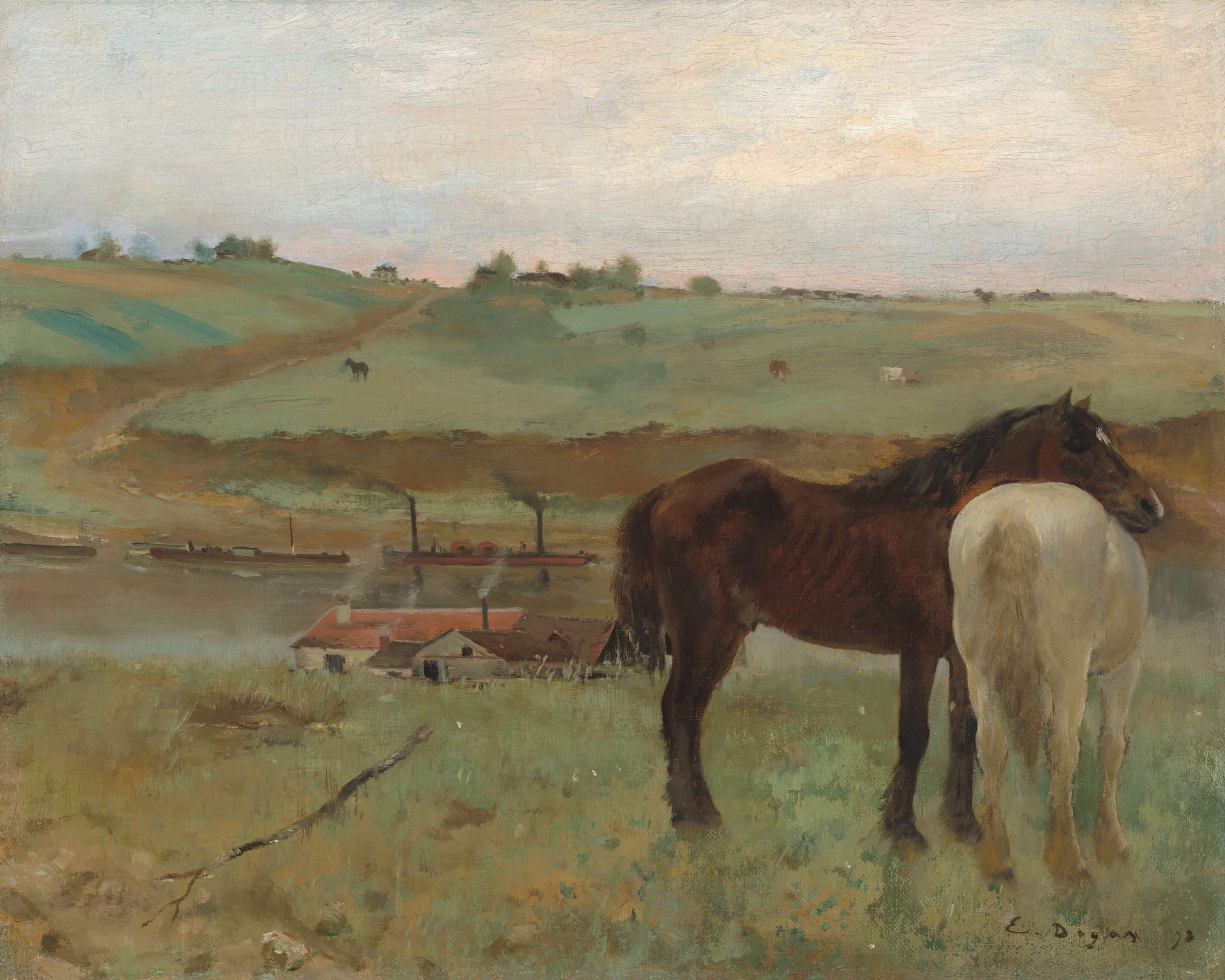 There is a line in Jennifer Chang’s poem “A Horse Named Never” that reads, “We think of a horse less as the history of one man and his sorrows /  than as the history of a whole evil time.” The line is actually something W.B. Yeats wrote in his essay “Emotion of Multitude” about King Lear, only instead of the word horse, Yeats says man. Yeats argues that Shakespeare’s plots and sublots mirror each other. If the hero of one drama loses his father, lesser characters’ will lose theirs. Lear’s folly is the world’s folly, “and the mind goes on imagining other shadows, shadow beyond shadow,” Yeats says. The word shadow isn’t far from shade, and shade isn’t all that far from ghost.

Sometimes our yearning for horses is so intense it hurts; it is the soul of nostalgia. Some girls, we might say, have a unique relationship with horses. Around adolescence, there are some girls who, by falling in love with horses, learn the shape and contour of their own entrapment. They may think a horse can power them beyond it, race them outside of it, but really horses are the embodiment of exploited energy, of harnessed potential. If a girl has the means to ride horses (because it’s an expensive enterprise), then she is, in effect, enacting her own domestication. She may foolishly think that on a horse she’s free, but neither she nor the horse are free.

Horses, like ghosts, remind us of uncomfortable things. For example, twenty-three racehorses have died running the track at Santa Anita since last December. What does that matter? To the owners, trainers, and jockeys, these individual horses may mean something in and of their individual selves, but to the rest of us they are a collective pall, an omen, a symptom of a bigger disease that’s both long-standing and far-reaching; I like to call it history and history likes to erase things, to turn them into ghosts. Yes, horses are ghosts. Look at it this way: often when horses are euthanized on the track, workers will quickly raise ersatz screens big enough to hide the scene from view. The death is hidden, the horse vanishes, and the next race begins.

Chang’s “A Horse Named Never” is, as she tells us in her account of the poem’s writing, a real horse. She says, “In a narrow mid-row stall at Rock Creek Park Horse Center he stands there now.” Never and the poem’s speaker “could neither flee nor be kept” in Virginia—the poem’s literal and philosophical setting—because the speaker and the horse are in conversation with one another and in conversation with history too—in particular the country’s slave-owning past and its founders’ moral failures. The speaker is, in fact, some speculative version of Thomas Jefferson who has chosen Never to ride—not fearsome Trapezoid, the “midnight mare,” not Biscuit, nor Crab, but the embodied abstraction Never—an idea that feels at once infinite and infinitesimal, broad and wide—and also inescapable. Jefferson is not, however, “afraid of Never.” In the poem, Jefferson uses Never to survey his land as he drafts Notes on the State of Virginia, what the speaker describes as “words by my own reckoning, an account of creeks and oystercatchers.” In other words, this is Jefferson’s version of things—“words by my own reckoning,”—a version too-long taken as impeachable truth. The truth, the poem suggests, is rather more complicated. The speaker tells us, “Why I chose Never I’ll never know,” suggesting an individual man’s ambivalence may result in devastating consequences not only for the indigenous and enslaved peoples that made Monticello possible, but for the animals on the land, and the land itself. Chang writes, “Seldom did I reach the little mountain without [Never], the easy crests making valleys of indifferent grasses.” Imperialism requires the master narrative overlaid like a “gilding” on those “indifferent grasses.”

In Chang’s poem, Never is a tool for the imperialist, but underneath that functionality is the horse’s animal realness, fundamentally unknowable, a kind of “negative capability” (to evoke Keats) that allows Chang to probe the more complex intersections between history and the lived experience.

The speaker in Natalie Shapero’s poem “Not Horses” also defines herself in the negative, beginning with the absence of horses, the horse-shaped space against which the speaker thrums like a bug on a window screen. She begins the poem with, “What I adore is not horses.” She’d prefer, after all, to be “a bug that lives only one day,” and “not horses, with their modern / domestic life span of 25 years.” A bug isn’t something of value; it can’t be easily commodified, though it is killable, just as horses are killable, only the bug’s death is so insignificant it can escape the historical weight we attach to seismic tragedies like war—the horse’s domain. The poem’s speaker tells us, “I share / my home not with horses, but with a little dog / who sees poorly at dusk and menaces stumps.” For her, horses are as untouchable as the statues to which her little dog “makes her muscle known” in an endearing but ultimately useless way. But, the poem tells us and the dog, “don’t be afraid— / our whole world is dead and so can do you no harm.” Indeed, the times Shapero describes are “rotting” and she is born into them as “into sin,” the horse in these times consigned to a status symbol for the rich and powerful and cultivated into long-lived amalgam of its past self, its animal-ness gone. This is a poem, like the echoed plotlines Yeats finds in Shakespeare, that reiterates its speaker’s sense of powerlessness, or, rather, that finds an odd optimism in it.

The poem “Two Weeks With No Phone” by Cynthia-Arrieu King is haunted too, haunted by the ghost of a broken phone, of dead links, of past and future losses embodied by a “smart ass horse” that “puffed himself out so that his saddle would be loose and his rider slide / on the coffee tree asphodel path.” Toward the end of the poem, the speaker is riding that horse, “maple and tulip and coffee leaves overhead, logs and creeks—saddle sagging towards one side / from the minute we left the barn,” on a tour of the landscape not dissimilar to Jefferson’s ride on Never through Virginia, only the myopic Jefferson gives way to a speaker in Arrieu-King’s poem who could never be as ignorant—she is much too nuanced for that, allowing the horse to play the part of nature playing a trick. That trick is loss, the awareness of its coming, “even with a repaired phone, the sense of inner moons, of enjoying a jot of sage.”

Arrieu-King’s horse desires separation—a reality the speaker both acknowledges and pushes back against; or perhaps the horse never wanted connection in the first place. The speaker says, “I want to talk to my friend and I never will again.” The speaker is slipping, building their argument on the back of edgewise, sideways observations. “Mom knows when I am there, but usually forgets that I have been there after I leave,” she says, and, “There was nothing to press my real thoughts against all day.” If we aren’t constantly documenting our lives, do our lives happen? The horse in “Two Weeks With No Phone” is an absence, an expressed nostalgia for the speaker’s past; of course, the horse itself wanted nothing to do with the memory and slips from its grasp.

This piece was originally published on April 15, 2019.