Home
»
Reading
»
How Does a Korean Debate Capitalism vs. Communism? 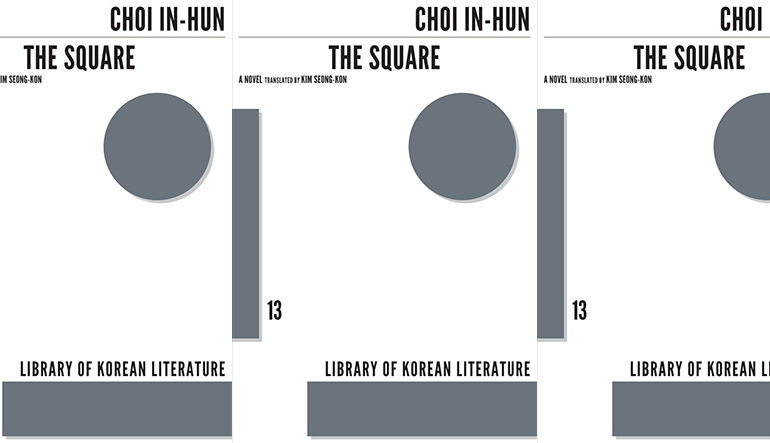 Choi In-Hun’s novel The Square is a modern Korean classic that might be called a bildungsroman of ideology. Originally released in 1961, the Dalkey Archive Press translation by Kim Seong-Kon was released as part of the Archive’s Library of Korean Literature in 2014.

Grappling with subjects like patriotism, Christianity, and Communism, the novel tells the tale of how a disenfranchised Korean POW ended up on a ship named the Tagore, headed to a “neutral” country that’s likely India. It’s told mostly in flashback from the perspective of the POW. This classic, award-winning book is considered by many to have kicked off Korean War literature.

As The Square begins, the orphan poet and intellectual elitist Lee Myong-Jun learns about women and completes his university studies in philosophy. His country has just rid itself of Japanese colonist rule. Now split between American forces and Soviet Communists, it is now, as Myong-Jun sees, being shaped by capitalism and communism. It’s particularly intriguing to get this inside glimpse of the split between North and South Korea. Even moreso because it’s by a young man who looks at this stuff anew, who’s not yet jaded by life and politics as he tries to determine which is preferable, especially because of course no economic/political system functions as purely as a manifesto or its founders would hope.

Tired of police interrogations that serve to dent his opinions of capitalism and whatever freedoms it’s said to offer, he heads to North Korea and writes propaganda editorials for the Communist Party. There he witnesses his defector father’s remarried life and bourgeois luxury and becomes sickened, pitting it against the bleak futures of the masses he sees, masses who are conversely forced into recrimination and self-denunciation. It’s as if by submersing himself in one eco-political side he sees its inherent dangers, as we might when we step into the art world or try to climb the ladder of Washington D.C. politics or Hollywood.

For instance, when touring multiple cities with the Party Myong-Jun sees something disheartening: “Schools, factories, citizens halls; the places filling these places were, in a word, lifeless. They simply sat with passive obedience.” Soon, his passionate editorials become equally as lifeless and hollow. The reader easily shivers as Myong-Jun’s illusions about Communism crumble and he sees the reality of Communism as a cult of personality more than the realization of Marx’s manifesto. It is not Marxism that doesn’t work; it’s that power-hungry people mislabel and mislead when entreating the masses into a Communist state. Party meetings have the resoundingly cultish feel and mantras and chants, which the author likens to Bible-thumping Christians.

“It was like a church minister opening the Bible and saying, ‘Let’s listen to the word of God. Acts of the Apostles…’ The ability to quickly and accurately quote the appropriate section from the history of the party was what the communists called cultural accomplishment.”

Communism in the fashion adopted by Korea is not a revolution of the people, the narrator argues. Instead, it’s decreed from the top of the governmental ladder, down to the citizens and written on official documents. That’s not the way to proper Marxist Communism, he believes, meanwhile making a comment that could relate to most forms of government and preventing readers from pretending their own isn’t equally complicit (especially as we witnessed during this election cycle). “Sly politicians, under the pretense of serving the people, occupy powerful positions and wield power while hiding their insolence.”

In this and other moments throughout the 160-page novel are echoes of other Modernist literature like Herman Hesse’s Demian and other writers of the era– even early Graham Greene a la the Destructors. This is particularly true when In-Hun attacks capitalism, which gives readers a curious vantage point to see that all political systems are based on mere rhetoric and demonstrate the underlying human belief in the survival of the fittest.

“When the men who went west to learn so-called democracy came back, they got up and stood on the backs of the people,” Myong-Jun tells his father.

One particularly interesting point about The Square is the ship named Tagore. It’s a reference to Rabindranath Tagore, a Bengali poet and Hindu philosopher. This suggestion might be reading too far into the naming but it does raise an eyebrow that Tagore, relinquished the knighthood given him by the British in protest of its policies in India. We can deduce from the ship’s name as well as the crew members’ Indian names that Myong-Jun was on his way to the subcontinent. If he makes it that far is another issue the reader must deduce for herself.