Home
»
Personal Essays
»
How the Past Echoes Through Our Lives 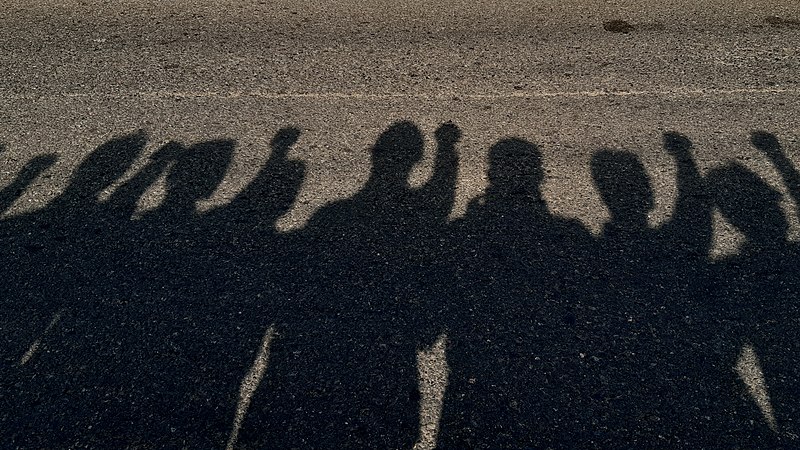 The operator-assisted collect call comes on a July morning in 1987. It’s still early, before 9 a.m., and except for the telephone ringing, the house is quiet, my younger sister and I the only ones at home. My father is on his way to work, or already there, and my older sister and mother are in Brooklyn, having left the previous day to get my sister settled in the city where she’ll complete her studies now that she has finished high school in Jamaica. It’s the first time all three of us girls haven’t traveled with my mother together, and what is already an unsettled time with the dynamics of our family shifting becomes even more so within minutes. On the other end of the line, a cousin speaks above the operator’s voice, trying to relay her message before the operator secures permission for the charges.

Though I catch her words, I’m too naive to understand what my cousin is doing, not quick enough to hear the message and then refuse the charge. My cousin has nothing more to say. She has done her part, delivered her message: my mother’s father died overnight.

There I am, fifteen years old, sitting on the edge of my parents’ bed with the telephone receiver, suddenly thrust into the role of notifying my parents—one seas away and another at a business without a working phone. My mother cuts her trip short and returns home within days to bury her father.

There is nothing especially remarkable about Papa Stanley’s death, no significant reason I should be thinking about it some 33 years later in the midst of a global pandemic and nationwide anti-racism protests, except it was the first part of what I came to see as a pattern emerging. Nearly a full year later, I graduated high school and migrated. Within a week of my leaving, my grandmother Annie—my father’s mother—died in her sleep of cardiac arrest, and, for the second year in a row, my mother cut her trip short to bury a parent.

Coincidence, perhaps, but I was convinced there was a message for my family in the timing of both grandparents’ deaths, and in my grandmother’s death a message specifically for me. Initially, I thought the message was an indictment on our migrating, our elders’ way of saying don’t go or lamenting the continued severing of ties to Jamaica. Not surprisingly, my grandmother’s death remained a shadow over my new immigrant life, and for a long time I felt guilty about leaving Jamaica. Infused with that guilt was a sense that I didn’t belong in America. I needed solid proof of the conclusions I had drawn around the timing of these deaths, but how would I know for sure that there was a message there? I watched and waited for my theory to solidify when my younger sister finished high school and migrated. In short, I waited for another grandparent to die.

The thing about the dead, according to African-based religious and cultural practices that survive in Jamaica, is that they are never really gone from our lives. They live on with us in the spirit world, dipping in and out of family affairs. Sometimes the spirits come of their own accord in dreams to warn or give advice, and someone will say, “Me dream see me grandmother last night.” Sometimes they are summoned by rituals. Sometimes they are evil, the kind you have to remove by a ritual of another kind. The existence of the spirit world was not part of my belief system growing up. It’s the sort of belief my parents would dismiss as rubbish, foolishness, something not explained or embedded in the strict Christian belief system upon which our lives were based. Yet I waited.

Thirty-two years later, my grandmother re-emerged in a way I hadn’t expected. Late this spring, when videos playing on repeat showed one black person’s life after another cut down by a police officer’s bullet or hands or knee, when the videos showed one family after another discussing a painful loss and far-flung communities publicly displaying their grief and anger, what I returned to is the long-simmering question of who belongs where and the elusive message I think my grandmother’s death holds for me.

Earlier in the year, just before the world shut down to contain COVID-19, I read Morgan Jerkins’s Wandering in Strange Lands: A Daughter of the Great Migration Reclaims Her Roots. In a bid to understand her family’s stories and elucidate her family’s roots in the South, Jerkins traces the pattern of the Great Migration in reverse. She travels south and west to Georgia, South Carolina, Louisiana, Oklahoma, and California to document her immediate family’s migration to New Jersey, and in so doing explores the effects of migration on cultural memory and black identity. What she learns and sometimes rediscovers in her travels is the price black people have been paying over the years to ensure their freedom and safety. She writes: “Ever since black people were brought to this country, we have been devising, revising, and improvising ways to nestle our families into new spaces. Movement characterizes African American life.” This quest describes my Jamaican family’s movement across the Caribbean, Europe, and the Americas. It describes my grandmother’s story. It describes our long, winding search for a place where we belong and can thrive.

Wandering in Strange Lands also had me thinking about the meaning we impose on certain things—superstitions that take root in our family stories, family stories that consciously and unconsciously shape our behaviors, learned fears that we pass on from generation to generation, religious traditions that we carry on without fully understanding their origin or meaning. So later in the spring, when I found myself seeking the elusive message my grandmother wanted to impart, I took my cues from Jerkins’s book and began looking at how the past echoes through our lives. I saw parallels I should have recognized earlier.

Mother Annie—as my father often refers to her—and I were nearly the same age when we first migrated from Jamaica, she to Cuba around 1919, and me to Brooklyn in 1988. I knew little about my grandparents’ lives in Cuba. They had passed away long before I knew to ask about that part of my family’s story, and the details my father and his siblings know cover a tiny fraction of their lives. I know my grandparents met and married in Cuba, my grandmother was a domestic worker and my grandfather cut cane. But I write to understand, and so in 2006, aware of how little I knew about why Jamaicans fanned out across the Caribbean to work and when and why they returned home—if at all—I set out to understand my grandparents’ experience in Cuba, and write a novel about a family’s quest to find long-lost relatives left there. I had long heard my grandmother had siblings who had never returned to Jamaica from Cuba and Costa Rica, and I was fascinated by a person’s ability to leave everything he has ever known behind, never to connect again. There are some parallels to the broad experience of Africans in the Americas: we were once removed, violently, from our homeland, with ties severed so completely that for many of us our origin story can only be diagrammed in snippets and DNA codes that indicate geographical regions rather than flesh and blood and reams of family history.

The story of black migrant workers in Cuba is not an easy one. Roughly two years before my grandparents left Jamaica as young adults to begin their lives in Cuba, fourteen Jamaican men working at the Jobabo sugar mill were lined up and executed by government troops. The massacre, which occurred in the midst of a nationwide anti-government revolt, “highlights what happened to those defined, and racially identified, as the object of fear during a context of political crisis” writes Jorge L. Giovannetti-Torres in his book Black British Migrants in Cuba: Race, Labor, and Empire in the Twentieth-Century Caribbean, 1898-1948. I don’t know if my grandparents knew of that incident before or after they journeyed to the island 90 miles north of Jamaica, but they would see other problems. One newspaper article after another pitted desirable immigrants—white Spaniards—against undesirable immigrants—black migrants from Haiti and the British West Indian islands. Not long after my grandparents migrated, the world economy collapsed, and Cuba’s already tenuous reception of the migrant laborers they invited to the island slipped even further. Throughout the eleven years my grandparents remained in Cuba, graphics in newspapers depicted migrants in negative ways. One graphic from a January 1929 issue of El seminario nacional depicted Haitian and Jamaicans as a stampede of animals chasing Cubans off a cliff. And throughout the ’20s and early ’30s, migrant laborers, especially Haitian migrants, were rounded up and forcefully repatriated, sometimes without their Cuban-born families, with some 38,000 Haitians repatriated in the 1930s.

When Mother Annie died in 1988, I didn’t know these details about what my family may have experienced and witnessed in Cuba. But I do know my grandparents grew tired of the burdens of their immigrant life and returned to Jamaica with four young children in 1931. I didn’t know then that the circumstances I would witness as an immigrant would be eerily similar to my grandmother’s. Not three years after I settled in Brooklyn, the Haitian immigrant crisis unfolded. Day after day, the evening and nightly news showed boatloads of dark-skinned migrants on rafts and boats ill-equipped for the journey across the ocean. The September 1991 coup that toppled the eight-month-old presidency of Jean-Bertrand Aristide propelled the flow of migrants seeking asylum; in the six-month period immediately following, the U.S. Coast Guard intercepted more than 38,000 Haitians at sea. Less than a third—11,000—were permitted to pursue asylum claims in the United States, after they were subjected to screening by immigration officials on board ships or at the U.S. naval base at Guantanamo Bay. On the other hand, I, who could fly back home to Jamaica at any time, was here, a privileged immigrant, still holding on to the guilt of leaving my country behind.

And there would be more evidence of black lives treated with little regard or snuffed out altogether. Before George Floyd, there were Abner Louima and Amadou Diallo, two immigrant black men brutalized by police in New York City—Louima assaulted and sexually abused, and Diallo killed in a hail of gunfire. Both were horrific. Both occurring in my early days here, when I was still finding my way as a new immigrant in America, underscored the reality my grandmother had known about the world. Could it be that, to borrow from Jerkins, my grandmother’s message was simply that there is no promised land for us in the Americas?

I’ve settled now on two things. First, as Jerkins puts it, “We are here because we are in perpetual motion, our migratory patterns rivaling those of birds.” Second, Mother Annie’s message was not necessarily an indictment on our leaving, but a reminder that wherever we go in the world we will continue to face the long struggle to be free. The events of the spring reminded me that our struggles today mirror our ancestors’ struggles. My question of belonging is the very question my grandparents asked, and answered in 1931 when they returned home. For a long time, I didn’t think I belonged in America. Now the question of where I belong is a different one. I don’t have the answer yet. But I no longer think of what I will leave behind—instead, I think about what I am running toward.

Tags:Morgan Jerkins, Wandering in Strange Lands: A Daughter of the Great Migration Reclaims Her Roots