Home
»
Interviews
»
How to Find Your Self (and How to Kill It): A Conversation with Suzi Analogue and Nathaniel Mackey on Black Music

In a blog series for Ploughshares, I interview a poet and a non-poet. This week, Nathaniel Mackey and musician Suzi Analogue. 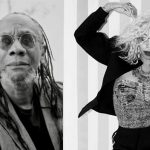 Suzi Analogue’s genre-bending work takes Black music for a ride through its own history. In Analogue’s work, we hear soul, R&B (or “raw&B” as Analogue calls it), hip-hop, a range of electronic musics, and jazz. We hear jazz too in Nathaniel Mackey’s work. His latest, Blue Fasa traverses the multiple and tumultuous paths toward (and back away from) selfhood, and Black selfhood, giving at every moment a potent music.

Both Analogue and Mackey work in series. Mackey’s “Songs of the Andoumboulou” and his “mu” series have been with us for a long while. We’ve had less time with Analogue, whose series Love Affairz and ZONEZ have been around since 2014 and 2016, respectively. Nonetheless, Analogue, who just released the second volume of her ZONEZ series, titled “THE SPEAKERS PUSH AIR & MY TEARS DRY,” says she’s already thinking ahead to volume 10.  Speaking of her own process, Analogue says, “The streets participate in this kind of serialization of work.”

I talked to Mackey and Analogue about how to, in Amiri Baraka’s words, find the self, then kill it—and about the role of technology in that process.

Anais Duplan: I had a conversation with Fred [Moten] earlier this summer where we talked about individuation. Fred was talking about the non-existence of the Black body or how individuation might impose upon the Black body. I had that in mind last night when I was revisiting the preface to Blue Fasa. There’s a moment when you talk about Baraka’s liner notes to The New Wave in Jazz. The phrase which just totally knocked me out is “New Black Music is this: Find the self then kill it.” I, immediately upon reading that, was like, how can we approach this as a truly two-part question? Where do we find the Black self and then how do we kill it?

Nathaniel Mackey: That is a statement of Baraka’s that I’ve pondered over for years. That’s not the first time I’ve quoted it. One of the things that he meant by that was [that] in the course of improvising and getting to the point where you can play free music, you have to find yourself. You have to find out what your sound is. It may be something innate, but you have to practice and find what it is, where it is, and how to get it out, and how to translate it through a horn or a piano or a bass—whatever—which you likely call “technology.” How do you technologize yourself? How do you utilize that technology to render something that may be unspeakable, or there before not spoken—and maybe unrenderable? How do you get out a version that at least approximates that self and, at the same time, registers your refusal to be satisfied that you have properly and authoritatively, or with some finality, articulated that self? Then you have to take that self into the interplay and dialogue and conversation and sometimes, debate and contentious interaction—friction—that is involved in playing in an ensemble. In some ways, you have to be prepared to lose that self, or even to be an instrument of losing it, which is to say, to be killing it. That means getting beyond what your prepared repertoire of selfhood is.

That’s some of it but that’s not all of it. It’s also in the context of a kind of sociopolitical ensembling that was going on at the time that we were involved in. I think there was tumult among black folks during that period—this is around the mid-sixties—that had come out of the Civil Rights Movement. One of the things that that involved was finding a self, really looking at the self that you had, and really coming to see that it had been fashioned by social relations that we wanted to obliterate. The whole regime of white supremacy and the social mores and instructions and folkways that kept that in place. You had to look at the extent to which you were compliant with that shaping. The self that you had found yourself to be was, in some way, a creation of that regime. Then killing it would mean fashioning a new self that would be in conflict with that regime and that wants to bring about the destruction of that regime.

Suzi Analogue talks about fashioning a self as a black femme intellectual in the arts context.

Suzi Analogue: There hasn’t been a lot of representation of the black femme intellectual, especially in the arts. When we picture the black femme intellectual, this is a space that we’re just creating in 2016. We just started to put a face to our mind, or vice versa, put a mind to our face. Our generation of women really has to create this blueprint for what’s to come and it’s going to be turning over faster and faster. I already see younger girls that have their own collectives and are doing cool things. When I was 18, I still had these very progressive ideas. I still was organizing my peers, I had a little organization I started called Brown Girl Army. I felt, even then, the need to create this community of all women of color. But I wasn’t deep into my politics then. Now that I’m interested in politics, I’m like, wow, there’s so much that I can convey just through the art. I don’t even have to have it challenged and questioned.

At least part of the freedoms that younger Black women and women of color are encountering has to do with increased access to social technologies that create safer, virtual spaces for self-exploration. Mackey deals with the idea of technological change too, in the passage below.

AD: There’s this idea that maybe, on the one hand, technology is there to help us see better or to help us apprehend our environment, but that there is certainly also a kind of apprehension involved in the way that I’m thinking of technologies that are part of my daily life—my phone and my computer and these things. Thinking about apprehension as a double-sided word which suggests seeing but also a kind of hesitation.

NM: As far as the technologies are concerned, they do extend and alter our sense experience of life in various ways. They improve our ability to exert force and to get certain things done. But there’s always been a kind of apprehensiveness that has accompanied those technological changes, it seems to me, in a lot of places. Various commentators on the Popol Vuh have talked about that as one of the nightmares that resides within the dreams of progress and accommodation and greater comfort and greater power, of nature and the world that drive  homo sapiens to be distinguished from most animals in that we are tool-makers. That’s one of our distinguishing characteristics as a species. There are other species that can use tools, that will use a stem of a tree to get ants out of an anthill and that kind of thing but none of those animal species have taken it to the point that we have, obviously, with language. It’s one of our distinguishing and defining features.

Music, too, is one of our defining features. Part of the reason I chose to talk to both Mackey and Analogue in tandem is for their treatment of language as music and vice versa.

SA: Black music is important to me, number one, because I’m black. I was raised knowing about the heritage of Black culture, starting from the Black Arts Movement. It’s mostly during the seventies, post-Civil Rights, where the youth that had encountered the Civil Rights Movement were starting to be able to create more space and opportunities for themselves. I was raised with a mom who went through that. She made me aware of that heritage and I just understood the importance of it from a young age. Music is a thing that we’ve used over time since, for Black Americans, coming to the United States and being enslaved. We used music as a way to communicate, specifically drumming and through coded lyrics in our songs that expressed how we really felt.

AD: I’m interested in what you said about coded lyrics. I feel like your lyrics are such an important part of my total picture of you as an artist. I was thinking a lot about “Jump Rope” and the lyrics to “Jump Rope” and how those feel—that song feels really loaded and really significant and really meaningful. You find a way to use an almost nursery rhyme kind of coding.

SA: Well, I wouldn’t describe it as a nursery rhyme; I would describe it as a hand game. Me choosing to use those lyrics was a representation of me explaining my experience growing up as a black girl. Hand games are something that you play with other black girls. Of course, everybody plays Miss Mary Mack, but we have very complex hand games with very complex syncopations and very complex rhythms. At the time I made “Jump Rope,” I was actually exploring the concept of young black girls being some of the first rappers in our communities. It’s embedded in black women’s youth culture.