Home
»
Book Reviews
»
How to Read Derek Jeter: On The Devil’s Snake Curve by Josh Ostergaard 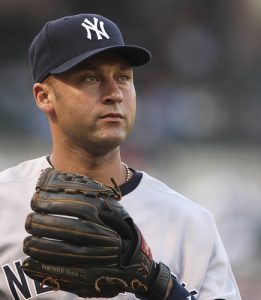 Can you find the symbols for American political power in this picture?

Of course every history is subjective, but Josh Ostergaard starts his from an intriguing place by broadcasting his subjectivity. Devil’s Snake Curve is Ostergaard’s American history of the twentieth- and twenty-first—centuries, as interpreted through baseball. The book is a collage of page-length anecdotes, equally likely to be culled from Ostergaard’s own underwhelming Little League youth or a century-old newspaper clipping, that cluster into themes like “Animals” or “Nationalism.”

It’s hard to argue with Ostergaard’s selection of the prime extended metaphor that binds baseball to American history: the New York Yankees. The damn Yankees. Equipped with all the money they could want, used to purchase all of the best players from all the tinier teams, the Yankees have for decades accumulated their victories in the baseball standings through sheer wealth of resources. On the occasion of their signing Babe Ruth from the rival Boston Red Sox, Ostergaard writes: “Anything they geared, anything that humiliated them, anything that beat them, the Yankees pacified or acquired.” The parallel, surely, is becoming clear even to the non-fan.

Ostergaard frequently references the many Yankee owners and managers who have, as one, banned their players from having facial hair in-season. (As much as this ban sounds like a relic from the Prohibition Era, it is still in effect today.) It’s an unlikely image but a poignant one, as Ostergaard tries to unravel the contradictory behavior of “a country that loves freedom but often demands uniformity.”

The Yankees also lurk in the shadows of the more sinister chapters of American history as well, as Ostergaard shows via his tireless historical research. Yankee Stadium is built on what was once a lumberyard owned by the Astor family, who had received/wrested the land from natives unable to keep pace with the new, industrious economy. Yankees owner Del Webb was a real estate developer who developed, among other things, the haunting World War II internment camps for Japanese-Americans. One of Webb’s owner descendents, the loud, risk-taking George Steinbrenner, was implicated in the Watergate scandal as part of a “complex scheme that funneled money to Nixon.” That these same men consider a mustache an affront to professionalism–and that we the public consider the Yankees a sterling example of professionalism–is a tricky paradox indeed.

Further muddying the waters: Ostergaard has a wealth of blissful personal memories watching and playing baseball, so what do those mean now? Even as a lifelong fan of baseball, I had never thought to weave its history into the greater world’s history in these intriguing ways. Unfortunately, as the book carries on, inching closer to the present day, Ostergaard’s shrill personal politics (the meaning of the book’s subtitle suddenly becomes clear) overwhelm the baseball. Sample sentence: “We the veal watch it on television, but a noble few take to the streets and protest in peace.” At one point, patrons of Taco Bell are labelled as xenophobic. I, for one, am not above a midnight Crunchwrap Supreme, and I’d like to think that I move through the world with a thoughtful outlook.

More relevant to the game: steroids are repeatedly bemoaned as a toxic end to baseball’s innocence. Among more up-to-date baseball coverage here in 2014, steroids are almost entirely avoided, if for no other reason than that horse has already been beaten from one afterlife to the next.

Ostergaard laments the perpetual futility of his hometown Kansas City Royals, a fandom that becomes emotionally trying when the team is produced by Wal-Mart executive David Glass. After arguing that Glass’ Royals are produced with the same soulless cost-effectiveness as a Wal-Mart trinket, Ostergaard quits the team: “It was not until I was surprised to find myself having fun in Yankee Stadium, even rooting for my archenemy, that I was forced to admit my change of heart over the Royals: I hate them, and I am glad that I hate them. I can’t imagine ever again rooting for any baseball team, but especially not the Kansas City Royals.” Welp, cut to Fall 2014, and the Royals are one of the last four teams standing in Major League Baseball, a few victories away from World Series entry. And, judging from Ostergaard’s Twitter, he has enthusiastically gotten back together with the Royals! As a fan, I understand: winning is a salve that cures so many ills. As a reader, well, the anti-corporate discourse sounds more like grousing about such-and-such player instead of a worldview worthy of adoption.

Near the book’s end, Ostergaard shares a bizarre story about a night out with friends. First they tailgate in the parking lot of the minor league St. Paul Saints. Then they balk at the $9 tickets (a perfectly reasonable rate) and decide that they will probably find a cheaper ticket across town, for the major league Minnesota Twins. The cheapest option there is $15, so they go to a bar instead. I think this is bizarre because Ostergaard, amidst pages bemoaning the abundance of millionaires in the big leagues, doesn’t hesitate to further pad the big, bad corporate wallets–at the same time avoiding giving his money to a minor league team, that tends to pay out salaries that are somewhere around the poverty line–in pursuit of a bargain.

But also: minor league baseball is definitely missing from Devil’s Snake Curve. While the Yankees are a perfect symbol for America as political and military entity, minor league baseball is just as fitting a symbol for the actual day-to-day life of Americans. Its participants are all but destined to lose money, to never advance up the ranks, to get booed by strangers for small miscues after ten-hour bus rides, and are forever christened with the nobility that they pursued their dream to its limits and were paid real green dollars to play baseball. Nobody involved is influential enough to get caught up in real, headlining world events, and every team is liable at any time to go bankrupt and get washed away like a sandcastle in the tide. It’s one of the only things worth paying to see in a lot of towns–an excuse to eat some hot dogs, an afternoon or evening of pure distraction, a surefire way to wring all the potential warmth from a summer day. What more could you want out of a game?