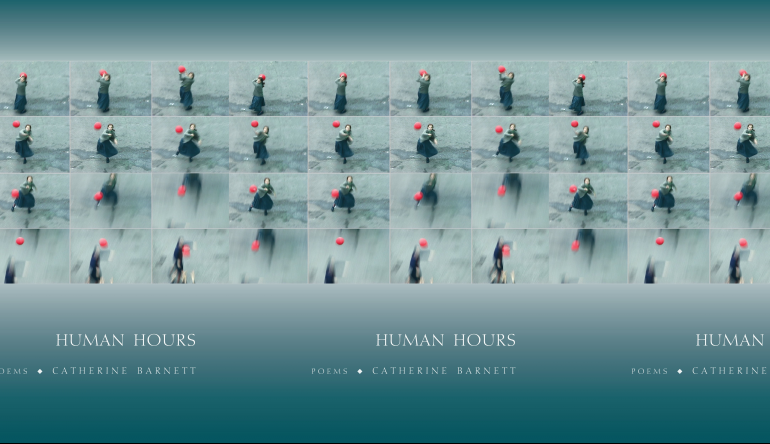 Catherine Barnett’s newest collection of poems, Human Hours, invites readers into the impermanence of time and the human desire to try and capture the hours that continually slip away from us. Our guide is a speaker who embraces the ache and hilarity of life found in unexpected moments. Many of the poems start in media res, providing readers with both a disorienting and disarming entry into the world of a speaker whose father is slowly losing his memory, and who has lost a lover to time and a son to college, but never herself.

As the previous quote suggests, though the speaker never receives answers to her questions, she remains in dialogue with other writers, often citing the names of their works or playing off of their sentence structure (e.g., William Carlos Williams’s “so much depends / upon // a red wheel / barrow”). The speaker’s allusions are as various as The Little Red Hen, the plays of Samuel Beckett, and Shakespeare’s sonnets, but the result are poems with multiple entry points. In “The Light from across the Fields,” the speaker states that “[t]he mind, yes, is always moving,” and readers see this movement in the variety of subjects juggled in each poem.

Perhaps the most delightful part of reading Barnett’s work is its tangents that somehow always manage to circle back and interweave themselves into the poems. In “Essay on An Essay Concerning Human Understanding,” readers move from the premise of John Locke’s essay to a meditation on how Locke would look on the speaker’s couch. We are then transported to the speaker’s attempt at French, and deposited just outside the Sacré-Cœur:

La duration, I said, trying to roll my r
when some new French friends asked

what I’d been thinking about.
John Locke et la duration.
They thought I said l’adoration,

which is also true.
Turns out duration is not a French word,
no matter how badly I pronounce it.

The correct term is la durée,
another word I mispronounce
though once I passed a lovely durée

riding my rented Vélib’ from the Seine
to the Sacré-Coeur,
where had I planned in advance

I could have spent the night in adoration.
Instead I only leaned my bike against the church
and looked out across the sea of human hours.

The wordplays on duration and adoration in this poem announce that time not only passes us but also repeats itself to us. A similar theme is at play in “Lyric and Narrative Time at Café Loup,” where readers are alerted by the title that the world of this poem will circle back on itself. The poem opens with a question and then proceeds to the unexpected before looping back into questions and a desire for those around the speaker to rewind time:

Has it passed quickly or slowly? The young women asked
with eerie timing—

and walked like a creosote angel across the white cloth.
The women must have seen me blanch or the waiter

sweep clean the table with a piece of fresh warm bread.
What was it? they asked,

What happened?
What was it?

Other poems convey even a single moment in time as an oscillation between grief and joy. In “Son in August,” it is the speaker herself who wants to rewind time, as delight and a striking sense of loss play out in the speaker as she leaves her son at college. The poem begins with a comedic command: “Dignity, I said to myself / as he carried his last things into the dorm,” and ends with the overwhelming realization that her son no longer lives at home, rendered artfully by shifts in narrative perspective:

she called to the unoccupied room,
hey love. It was so hot the air
from the freezer turned to steam

and she took the ice into her own hands,
held it, held it gently against the back
of my warm animal neck

until something began to melt and I was alone.

As Barnett unfolds for readers the hours of a particular human life, she simultaneously asks readers to examine their own hours. Barnett’s style is conversational, convivial, an invitation to enter the life of a speaker who must say goodbye often as the hours of her life pass her by. In the penultimate poem, “Accursed Questions, iv,” the speaker seems to make her peace with the uncertainty of time and the limited hours she has left: “The only way to manage all this not-knowing is to hope in my next life everything will be clear, just wait.” Time becomes cyclical again. The hours pass but seem to bloom up again in other days and other memories. The poems in Human Hours both disrupt time and hold it in place.