Home
»
Book Reviews
»
Poetry
»
“Hyperconsciousness of the Historical Instability of Words”: An Interview with Monica Youn 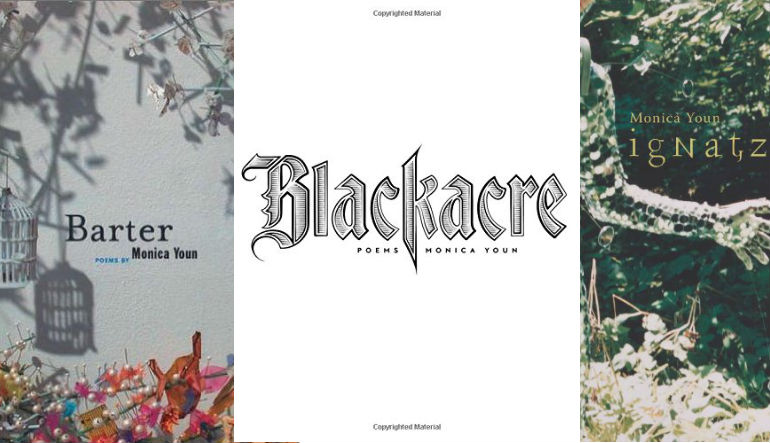 Monica Youn’s poems are precise, sharp-edged and fleet-footed; they always seem to be moving in three different directions at once. She is the author of three books of poems: Blackacre, Barter, and Ignatz, and her poems have appeared in numerous journals and anthologies. A former attorney, she now teaches at Princeton and in the MFA program at Warren Wilson. We caught up via email at the start of the new year to talk about the similarities between poets and lawyers, her latest book, and what might be her next one.

Matthew Thorburn: “Blackacre” is a legal term used for a hypothetical property—a sort of “Jane Doe” for real estate law. How did this concept become the thematic frame for your new book?

Monica Youn: By the time I arrived at the Blackacre concept, I had been searching for several years for a way to write about infertility—not just my own intensely personal experience of it but also the social meanings of it, the stigmatization of it—how many layers of shame, envy, faith, value, secrecy, and blame still cloak and entangle this simple physical fact.

And Blackacre—one of the wonderfully evocative fragments of legalese I retained from law school—provided an avenue for me to talk about both the personal and the social. As a fictional estate, Blackacre is depicted as gothically, comically bleak—“barren,” “infertile”—agricultural terms used to devalue landscapes and bodies when such landscapes and bodies are viewed through the lens of property.

Blackacre came ready-made with a prepackaged set of meanings and an associated vocabulary, meaning that I didn’t have to spend time or space retracing the all-too-obvious linkages our culture draws between the female body and landscape. Instead, taking the societal equation between body and property as a given, I was able to circle around and scrutinize these associations at various removes and from various angles, bringing in larger themes of limitation, transformation, and mortality. And since the term Blackacre is part of an ongoing sequence of variations—Whiteacre, Blueacre, Greenacre, etc.—I could inhabit various cultural incarnations and manifestations of these associated concepts—a software app, a snack cake, a sonnet.

And the property law angle is also central to the book. It’s troubling to think about how much of our system of inherited property hinges on the control of women’s bodies. If John Doe wants to ensure that Blackacre gets passed down to John Doe, Jr., he has to ensure that Jane Doe is young, is fertile, and is faithful. An entire economy is predicated on such control, and in order to ensure its stability, it is necessary to punish and devalue—through legal controls or through social stigmatization—women who are aging, infertile, or unfaithful. And systems of societal control are seamless—some are legal, some are cultural—they interconnect and mutually reinforce each other. In recent decades we have begun to dismantle some of the legal controls over women’s bodies (although even those inadequate gains are under ferocious and unrelenting attack, especially now.) But the social controls remain astonishingly intact—the stories we pass down to our children about Guinevere, Anne Boleyn, Lady Macbeth, Ms. Havisham, evil queens, wicked stepmothers; the stigmatization of unmarried women; the baby dolls we buy for little girls who are themselves still in diapers—all of these messages about how and under what conditions this society values, or devalues, women.

MT: Are there other ways in which your work as a lawyer has contributed to or shaped your poems?

MY: Lawyers and poets are both absurdly obsessive about their relationship to language—they probably spend more time thinking about and discussing whether a particular semicolon should actually be an em-dash than almost any other groups of people. Part of that obsession is a hyperconsciousness of the historical instability of words and phrases. Lawyers in the Anglo-American system are trained in the common law method where each new case is decided based on precedents set by cases that have come before. Powerful clusters of words—“equal protection of the law”; “cruel and unusual punishment”—move through history accumulating layers of meaning, so that the meaning of the phrase becomes the sum total of each previous use of the phrase, inherently collaborative, inherently unstable. My legal training, I think, accounts for my poetic fascination with etymology, my sense that every word contains the seeds of its own historical poem.

MY: I was right down to the wire on the revisions to Blackacre, which I only completed in late March, and I always like to let myself lie fallow for a long time after completing a book—to write and read without any particular agenda.

But I have some idea that the starting point for my next project, tentatively titled Cribs, will be Ernest Fenollosa’s word-grid cribs of classical Chinese poetry that Ezra Pound used as the basis for his “translations” in Cathay. Cathay is a work situated at several removes—ancient Chinese texts interpreted through the cracked lens of an American scholar of Japanese literature, then supposedly “translated” by an American modernist poet. These removes have a particular resonance for me, as a thoroughly deracinated first-generation Korean-American, raised in Houston, Texas, separated from her “home” culture by barriers of language and family trauma. I have always approached my own racial heritage through a borrowed set of lenses, made for Western eyes, treating Chinese and Japanese materials as a rough proxy for “Asian-ness.” Now I’m the mother of a half-Korean son and want to instill in him some sense of the language and culture—a language and culture that are supposed to be “my heritage,” and yet feel alien to me. A “crib” can be a cheat sheet or a slipshod translation; a “crib” is also, of course, a baby bed, and “to crib” means, in some sense, to steal. The word contains its own interference patterns. Especially now, with the rise of white nationalism coinciding with the dawning of my son’s sense of self, these questions of “foreignness” and “home” seem particularly urgent.