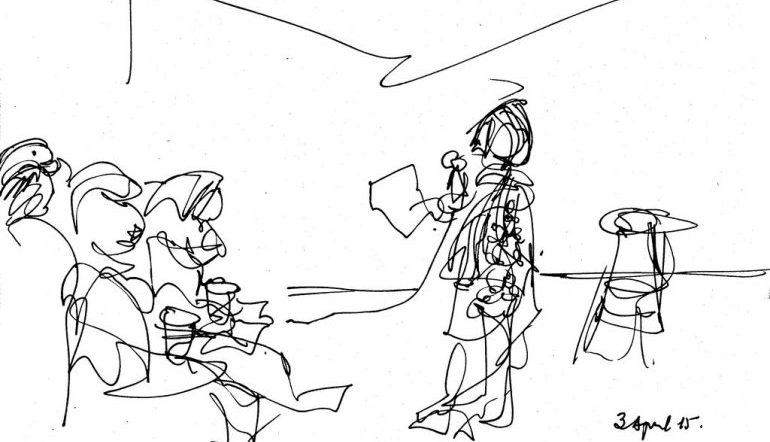 One of the finest readings I can remember attending took place a few years ago. It was held at the Museum of Printing History in Houston, a serene little building displaying so many typographical wonders that each time I leave I feel compelled to murder the first tree in sight and pulp the remains for the mill, just so some letterpress virtuoso will have a fresh piece of paper he can stomp ink onto. About sixty of us were seated, talking and waiting for the writer to be introduced.

I soon noticed that the room was quieting, and when I looked to the podium I saw a wiry woman with dark hair giving us a look that suggested something between a school teacher’s reproach and insane ferocity. This was Mary Ruefle. She stood there silently until the last person settled down, so that the only remaining noise was the breathiness of the air conditioning vent. She then started reading a piece called “Snow,” which did that thing to the top of my head Emily Dickinson famously describes.

Not the reading I attended, but great nonetheless.

Later, I went home and wrote, having been lit up a little by the big fire Ruefle made through her performance. I’m usually inclined to work on a poem after I hear a terrific reading. Inspiration can travel this way, a reading acting like a live wire that passes on part of its creative charge. But I’ve noticed something. Whatever sense of artistic euphoria I may have after a reading like Ruefle’s, it doesn’t compare to the sheer creative rush I experience after a mind-blowingly awful literary exhibition.

Once, at a theater-in-the-round, I sat through a reading where the featured poet snapped his book shut smugly after almost every poem, which made the dreck he was uttering even more unbearable. He decided to treat us further by walking out from behind the podium, pacing back and forth across the stage as he read, while the heels of his dress shoes made a determined click with each step, echoing the pop of his book-shutting. He finally thanked the audience by making a full bow to each side of the auditorium. I wanted to strangle him. The comedian Patton Oswalt’s riveting performance as poet E. Hamish Plumbrick gives you an idea of what I’m talking about (make sure you watch the whole way through for some context on the title of this post).

No one wants to be a Plumbrick, but I wouldn’t mind having his death-wattle.

Both the poetry and the performance I witnessed that evening were horrible (good execution of one or the other often saves an otherwise failed reading). But the urge for me to write was far more intense after this debacle than after I saw Ruefle. Why? As a good friend of mine has pointed out, one reason is that, as writers, we want to put as much aesthetic distance as possible between the schlub we’ve just witnessed and ourselves. We want to ensure that our facility with language, imaginative scope, and awareness of the human condition are, as he says, “light-years beyond” that microcosm of doggerel and wretched prose.

My friend is right, but there’s also more going on, at least for me. I’m about to confess something to you that will call into question my general sense of decency and ruin whatever reputation I may have for being a compassionate, warm-hearted citizen. My fevered impulse to write after a bad reading is really combative. I want to negate that author’s hack work. I want to write a poem so astounding that it compensates for the literary catastrophe I suffered through. And when I read my poem aloud, I want to deliver it with such mastery that the earth splits open and all the hacks in the world are swallowed into a fiery pit.

Perhaps that’s overstating things, but you get the drift. I also get riled up as I read rotten poetry and prose in publications, but when I have to listen to it accompanied by affected gesticulations, oral flourishes, tedious segues, manufactured solemnity, chortles at one’s own “humorous” writing, or any number of other irritating performance habits–well, that’s insulting.

Now, anyone who’s ever stepped in front of a bunch of strangers (or worse, people they actually know) to perform a poem or story has been guilty of at least one of the unsavory traits I list above. After my second reading, a co-worker who had stopped by to support me was kind enough to let me know that I sounded like a “fop,” which I’m sure was true. It can take a long time for a writer to become competent at performing his or her own work, and even the best readers have an off night now and then.

But I embrace that competitive, edgy feeling I get after a bad reading. It’s completely generative, and legitimate, if only for the fact that it gets me in front of a blank page. One of the fundamental reasons we make art is to address the world’s deficiencies. This is why we yearn for transcendence in literature, to move us from everyday human existence, which is flawed and limited, to something boundless and complete–we want just a little piece of the infinite. During a bad reading, our deficiencies are embodied and voiced, which in my case elicits a visceral response, one that’s directly aligned with my poetic impulse. I like bad readings because they give me something to push against creatively.

Or maybe I’m just a jerk. Someone please let me know.

This is Peter‘s second post for Get Behind the Plough.