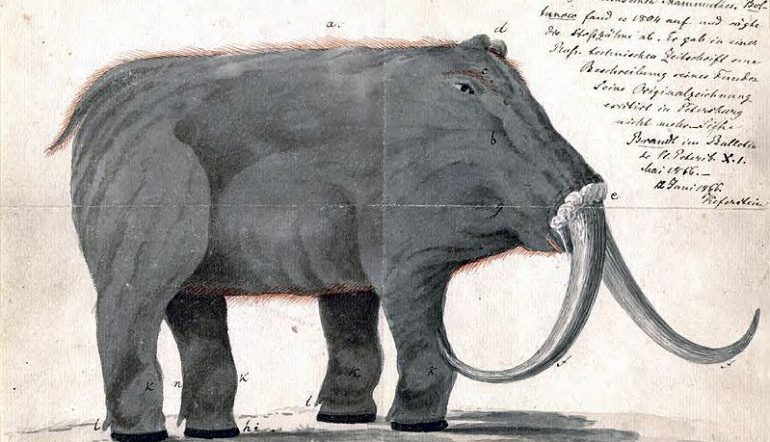 The Old West is a place of myth as well as of history. Popularized through the Western genre, the mythological West is commonly associated with the activities of cowboys, gunslingers, and outlaws during the thirty years between 1860 and 1890. There is, however, another earlier mythology to the American West, from a time when everything beyond the Mississippi River was, for the European settlers, uncharted land. It is the mythological aspect of this particular time and place that Carys Davies mobilizes so effectively in her debut novel, West.

The catalyst in Davies’ narrative hinges on an understanding of the uncharted West as a space of imagination and possibility. Like the illustrated maps of early modern Europe, festooned with depictions of sea monsters believed to be lurking in the ocean’s depths, the American West harbored its own legends of undiscovered beasts. One of the most famous of these, discussed in Thomas Jefferson’s Notes on the State of Virginia and perhaps an additional factor behind the famous Corps of Discovery Expedition commissioned by Jefferson and undertaken by Meriwether Lewis and William Clark, was the idea that mammoths continued to roam the western and northernmost regions of the land. This supposition was based on discoveries of large bones and fossils throughout the eighteenth century, beginning with a five-pound tooth discovered in the Hudson River Valley in 1705.

In Davies’ novel, which is clearly inspired by this piece of history, a widowed father, Cyrus Bellman, becomes transfixed by a newspaper article detailing the discovery of a collection of giant bones in Kentucky: “there were no illustrations, but in his mind they resembled a ruined church, or a shipwreck of stone . . . teeth the size of pumpkins, shoulder blades a yard wide, jawbones that suggested a head as tall as a large man. A creature entirely unknown. An animal incognitum.” The breadth of Cyrus’ imagination here is vast. His sense of wonder, palpable. With this single news clipping in his pocket, he decides to set out in search of these “gigantic monsters” that have taken root so firmly in his mind and which he believes still exist somewhere in the far west.

Considered foolish by his neighbors, and even by his own sister, he is unable to communicate the spirit of exploration and discovery that has taken hold of him. In fact, when he comes to articulate his decision to set out in pursuit of these unknown beasts, his words fail him: “Bellman sighed. There was a helpless look about him. ‘I have to go. I have to go and see. That’s all I can tell you. I have to. I don’t know what else to say.’” This seemingly incommunicable but nevertheless deep-seated desire for discovery and for the pursuit of wonder and fascination is handled by Davies with a degree of ambiguity. There is something appealing about Cyrus’ sense of purpose, his commitment and determination, his grand ideas. But he is leaving a motherless daughter to the care of an aunt in order to embark on a dangerous expedition for which he—a simple farmer—is largely unprepared. All this on no greater basis than a news clipping and his own imagination. Is Cyrus a hero or a fool? The question is very much up for debate.

Cyrus is often presented as a comical figure. The discrepancies between his sense of reality and the reality experienced by others—particularly that of his non-English-speaking native companion, the inauspiciously named Old Woman From A Distance, whom he employs near the beginning of his journey—are a source of humor for much of the story. In one scene, Old Woman From A Distance contemplates Cyrus’ red hair as a reminder of the settler that brutally raped and murdered his sister. The teen feels his hatred rise every time he wakes to the sight of that red hair; “there were times when he almost gagged.” Yet Cyrus, unable to communicate with Old Woman From A Distance, views the boy’s nighttime wakefulness as a comfort: “It made Bellman feel safe. The boy awake like that and alert, watching for danger that Bellman might not even know was there.” The comedic irony of Cyrus’ blissful ignorance here resonates with the folly of his expedition, driven by assumptions and gut-feelings rather than knowledge.

Despite this, Cyrus cuts a heroic figure in the mind of his young daughter, Bess:

In her opinion he did not resemble any kind of fool. In her opinion he looked grand and purposeful and brave. In her opinion he looked intelligent and romantic and adventurous. He looked like someone with a mission that made him different from other people, and for as long as he was gone she would hold this picture of him in her mind: up there on his horse with his bags and his bundles and his weapons—up there in his long coat and his stovepipe hat, heading off into the west.

Such an image of Cyrus could easily be dismissed as the wishful thinking of a child. This is particularly true when we reframe the picture, seeing a man laden with odds and ends and wearing a ridiculous hat purchased so that he might “cut a more imposing figure in front of the natives…that they would think of him, if not as a king or some kind of god, then at least as someone powerful who was capable of doing them harm.” What Davies makes clear, however, is that while Cyrus may be comical and his endeavor doomed, his spirit of purpose and adventure and his capacity for imagination aren’t entirely to be mocked. This is made apparent in Bess’ parallel storyline.

As Bess grows into a teen without her father or her mother to guide her, she has a series of difficult and disturbing encounters with the adult world, particularly with predatory older men. Wiser than her years, she is perceptive, adaptive, and pragmatic in dealing with her new reality (becoming a woman, almost alone, in a man’s world). Like her father, however, Bess turns to her imagination and to storytelling for comfort: she thinks frequently of heaven, and “sometimes in the mornings between dreaming and waking it seemed to merge into the picture she had in her mind of the west, where her father had gone, which she imagined to be a place of undulating grass and blue skies and distant, craggy mountains, a place where things that were dead here in Pennsylvania and Kentucky were still alive.”

If we laugh often at Cyrus, Bess is a character that courts nothing but sympathy and admiration from the reader. Her appeals to imagination are as heartfelt as her father’s, but, unlike him, she is not disconnected from reality. While we can assume that Bess would not embark on a ludicrous quest, she nevertheless takes a primary role in the mythmaking process. Through an important decision she makes at the end of the novel, she transforms the quest undertaken by her father into something heroic. She chooses, while acknowledging the reality of his fate, to preserve the myth of his expedition. This decision rescues Cyrus from his position as a figure of fun, both in his local community and for the reader. It reveals that mythologies often arise from foolish beginnings but that the elevated stories that emerge are no less valuable.

The American West has long been a space of myth and imagination. Davies’ novel takes a sideways look at the process of mythmaking in this space, using humor and a fable-like simplicity to communicate its underlying complexities. Imagination in Davies’ narrative is multifaceted. It is silly and ridiculous, admirable and heroic, and a noble escape from the hard realities of life. As an unconventional Western hero, Cyrus embodies all of these things, and, through his daughter, he achieves, in the end, a measure of the mythological status of his “gigantic monsters.”