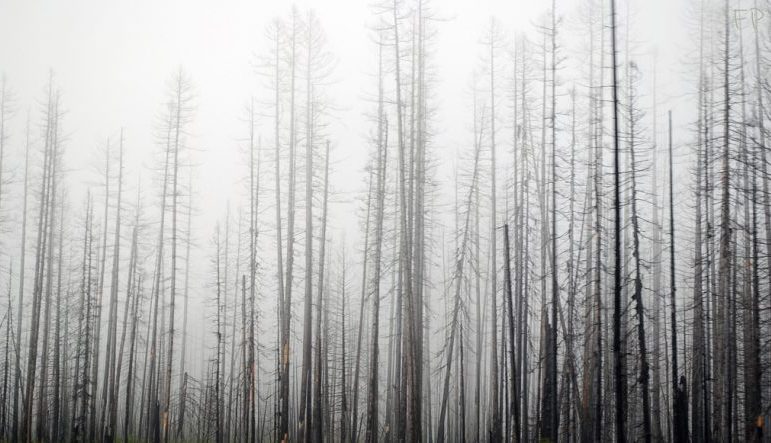 Beginning with her childhood in Wisconsin and threading through her years in Chicago, Iowa, Kentucky, and numerous cities abroad, Kristen Radtke’s 2017 graphic memoir Imagine Wanting Only This chronicles her enduring obsession with ruins and the significance people find in them. Instigated by the premature death of her uncle, Radtke contrasts these “scooped-out places,” abandoned in war, recession, or calamity, with the figurative remnants of our pasts: deceased relatives, old lovers, former homes, the people and places that have left us or that we have given up. The past, her memoir suggests, is ever present.

Midway through the memoir, she shifts focus away from her life to instead recount the nineteenth-century history of Peshtigo, Wisconsin. Peshtigo, known primarily as the site of an 1871 fire that killed an estimated 1,500 people and burned over a million acres of land, is not far from Green Bay, where Radtke spent her childhood and to where she returns several times throughout her memoir. In recounting a largely forgotten episode of regional history, she considers how the events preceding and following this fire shaped the ecological and cultural landscapes of Wisconsin and, in turn, how those landscapes inform and intersect with her own life.

This history, however, is not objective, nor does it endure beyond the context in which it was created. Radtke includes an illustration of a dark, dense forest, snarled branches beneath script recounting the initial European settlement of Peshtigo. The image and accompanying language present a romanticized version of the frontier, suggesting a prosperous wilderness populated by enterprising and industrious settlers. Despite this initial mythologizing, it quickly becomes clear that Radtke includes this passage not to endorse such romanticism but rather to acknowledge and critique its artifice. The next panel depicts what appears to be an early sketch of the forest from the previous panel, the entangled branches replaced by simple, unadorned lines. A Pink Pearl eraser sits at the bottom of the page, reminding the reader of the revisions that occurred while drawing this image. In revealing to her reader an initial draft of the prior panel, Radtke demonstrates how this history is a careful act of creation, one that raises numerous questions regarding what artists or historians emphasize, how they represent it, and why they have decided to include it.

The process of writing history has always been political, though our current moment has made us especially attuned to that fact. Given the introduction of “fake news” and “alternative facts” into our cultural lexicon, alongside the political echo chambers created by social and news media, we live in a time of increased skepticism toward the information we encounter, and the subjectivity of history is rightfully a source of anxiety. If any attempt to reconstruct the past in order to clarify the present involves fabrication and omission, how can we be certain of the narratives that constitute our personal and collective identities? The implications of this question are far-reaching, but they are especially pressing for memoir. The genre possesses a veneer of truth, an expectation that the writer is accurately portraying their life. A degree of artistic license is, however, inevitable. This tension between fiction and nonfiction leaves memoirs in a fraught, uncertain space with regard to the histories they recount.

Rather than shying away from this space, Imagine Wanting Only This finds a home in it. The book, through excavating ruins both literal and metaphoric, considers how the past becomes an instrument of the present, how we narrate history to give meaning to our individual lives and construct national mythologies. Accordingly, Radtke forgoes any pretense of objectivity, openly engaging with how she curates the events portrayed in her memoir for her own thematic purpose. Rather than striving for impartiality or uncontested truth, Imagine Wanting Only This presents a different path for memoirs, suggesting they can instead adopt subjectivity as their principal intent and, in turn, provide insight into how we construct personal meaning.

The Peshtigo Fire serves as the clearest example of that practice, since the fire’s ultimate significance arises from how it informs Radtke’s own life. Its importance stems from a moment in the book’s prologue, which depicts an evening from her childhood when her uncle brought her to see fireflies in the woods near her home. Radtke’s account of the evening culminates with a close-up of her young, awestruck face, a response to the field full of fireflies revealed in the next panel. Opening with this moment suggests the evening is foundational, a night in which she connected with both her uncle and the landscape in which she grew up, and Radtke returns to it later in the Peshtigo chapter. After her account of the fire, she wonders “what would’ve happened if the fire hadn’t. Peshtigo could’ve kept growing and become a city like Minneapolis or Detroit.” The memoir then reimagines those same three panels from the prologue had they occurred in the hypothetical metropolis of Peshtigo rather than the small, sparsely populated town that never recovered from the fire. Her awestruck expression is identical, but she now directs it toward skyscrapers lit up at night rather than toward fireflies. The fire, the memoir suggests, made possible that integral evening from her childhood. By representing the fire in this manner, Radtke inscribes it with connotations that depend entirely upon her personal narrative. Its significance is contextual—it has no fixed meaning beyond how it relates to the memoir that surrounds it.

The ease with which Radtke adopts the fire and incorporates it into her childhood also calls into question how she chooses to portray her own life. Following the reimagined childhood panels, she admits that she “didn’t care that much” about the facts of the fire and instead “loved the mythology of it all.” It becomes clear that “it all” pertains not only to the fire but to her representation of that childhood evening as well. These quotes are accompanied by an image of Radtke drawing panels on her floor, surrounded by discarded drafts. With the Pink Pearl eraser at the beginning and these rejected pages at the end, her history of Peshtigo is bookended by reminders of her authorial presence, framing both the fire and its effect on her life as acts of her creation. That the firefly evening from her childhood can be so easily transposed onto a different setting suggests even that memory is not fixed or stable, since, like the fire, its import can also change based on its context within the memoir. The whole section—Peshtigo, the fire, the ensuing circumstances of her youth—becomes merely part of the “mythology of it all.” As Radtke repeatedly reminds us and asks us to consider, anything that appears within the represented world of her memoir is contingent upon her and inseparable from how she chooses to write and draw it.

Reworking history for one’s own purpose may seem harmless enough in Radtke’s case, but Peshtigo also demonstrates how readily such an event can be appropriated for destructive ends. As the book acknowledges, some historians believe that the US Army studied accounts of the fire in order to understand how to recreate its effects for the firebomb attacks on Germany and Japan during World War Two. The army first tested these bombs by repurposing a remote section of the Utah desert, christened “Dugway,” where they have continued to experiment with biological and chemical weapons. These tests resulted in a 1968 incident in which an accidental deployment of a nerve agent killed 6,400 sheep grazing nearby, an event that leads to the most unsettling moment of the memoir: a two-page spread filled with a countless number of sheep, blankly staring out at the reader. Contained within this jarring image is a suggestion of all the death and destruction that occurred as a result of the Dugway tests—tests that perhaps began with replications of the Peshtigo Fire. By pairing the army’s possible “reimagining” of the fire with its own representation of the same event, Imagine Wanting Only This reminds its reader that history does not exist in a vacuum, that there is the potential for incredible violence in the belief that historical events only have value for how they can be manipulated.

This notion may seem deeply fatalistic, as if memoir can only comment upon its own artifice and always risks doing violence to the history it attempts to recount. The end of Imagine Wanting Only This would also appear to support that notion. In the final pages, Radtke observes, “I assign meaning…as if obsession equates authority,” acknowledging that investing a history with personal significance does not mean she possesses that history. Furthermore, if such meaning depends on the existence of an author or reader to impose it, then it only lasts as long as we are present to do so. This realization leads Radtke to observe that “we forget that everything will become no longer ours,” that the objects, people, places, and histories to which we assign worth and ownership will not retain those labels after we are gone. Then, the final line: “You will have touched nothing on the earth.” At first, this conclusion may read as resignation to the project’s inability to comment on any concerns beyond its own subjectivity.

Recognizing the lack of paramount, permanent meaning can, however, also be liberating. If we accept subjectivity as a central tenet of memoir—rather than a failing—then the genre’s relationship with historical fact becomes less politically fraught. By admitting a lack of authority over the circumstances it recounts, Imagine Wanting Only This encourages readers and writers to value memoirs not as objective sources but rather for the intensely personal perspective they reveal. In other words, reading memoirs can serve as windows into the varied ways in which people perceive their world and choose to narrate their lives. In that way, a memoir would not claim sole authority over its historical subject and instead would allow for a range of perspectives to emerge. If a memoir acknowledges its own subjectivity—as Imagine Wanting Only This does—then it could not be used to marginalize or discredit voices that offer contrasting perspectives, since it would not claim authority over any viewpoint but its own.

The imperative for the reader, then, is to seek out memoirs that, when considered together, encompass a range of voices and are not limited to a singular outlook that merely reaffirms the reader’s preconceived notions. To that end, it is fitting that the implications of Radtke’s conclusion are ambiguous, allowing for multiple interpretations of the last line. You, the reader, have to decide whether the notion that “you will have touched nothing on the earth” is liberating or limiting. That notion can empty history of its import and excuse awful acts of violence, as it did for the US Army at Dugway. Alternatively, it can allow us to build meaning and connection where it may have been absent, as Radtke seeks to do. Such connection would be temporary, yes, but its transience would not preclude its value while it endures.