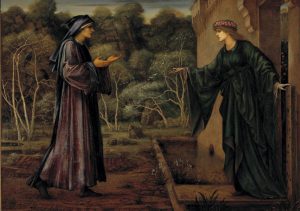 Traveling by foot creates a corporeal connection with the land. Our species first migrated one footstep at a time in pursuit of the flora and fauna that fed us. When we began to undertake such journeys for spiritual reasons as well, our planet became marked by the many paths of our species’ longing.

“Anthropology is a science of mutual surprise,” Anne Carson writes. A sweeping sense of astonishment pervades her lyric essay “The Anthropology of Water,” in which a young, female speaker walks the Camino de Santiago. Along the course of a rugged pilgrimage, Carson’s defined formal structure enables the logical leaps that keep the speaker in a constant state of new encounter. The speaker considers dreams, folklore, the purposes and sensations of pilgrimage, and her love affair with a male companion she refers to only as “my Cid” as she seeks penance (for what, the reader doesn’t know). As her mind’s constellated meanderings undercut the journey’s unceasing forward motion, “The Anthropology of Water” erodes assumptions of linear progress.

Much of “Anthropology” is written in a diaristic sequence, a form attuned to the speaker’s movement. Each entry in “Kinds of Water: An Essay on the Road to Compostela” opens with a date (8th of July, for example), a place (Sahagún, El Burgo…), and an epigraph from an earlier literary pilgrim (Mitsune, Basho, Shiren…). Simultaneously designating one place in time and referencing another point in another human’s journey, Carson twists her speaker’s path with that of previous travelers as interested as she is in a “sardine” or a “rising moon.”

Defined temporal and spatial markers act as stable fenceposts between which Carson pursues a pilgrim’s enigmas. “Penance can be a surprising study and pilgrims, even very authentic ones, raven in ways they do not expect,” Carson writes. In each day’s entry, thematic threads spring from, but are not limited to, the day’s path. Writing in the present tense to an unnamed “you,” the speaker refers to absent photographs and circles through recurrent images: bread, gold, dogs, “kinds of water.” Each entry shifts between direct address and scientific remove, terminating in a question or riddle: “When is a pilgrim like a photograph? When the blend of acids and sentiment is just right.” Carson’s elusive exits return the reader to the feeling of an endless pursuit through new territory.

A pilgrim moves through a foreign space in the act of questioning. “Pilgrims were people wondering, wondering. Whom shall I meet now?” The dizzying returns and repetitions allow the reader to feel the speaker’s accumulating emotions. She pushes through angers and absurdities, unable to communicate openly with her effortlessly affable companion. In both the journey and the written account, physical discipline holds the pilgrimage together. “Penance is one form we find, one form we insist on,” Carson writes.

The word “pilgrim” derives from the Latin “peregrinus,” meaning “foreign.” A foreigner moves across the earth, through a new land, seeking what? Near the beginning of the journey, Carson writes, “Spanish bread is the same color as the stones that lie along the roadside—gold. True, I often mistake stones for bread. Pilgrims’ hunger is a curious thing.” Though primary observation drives the speaker forward, it is not to be relied upon: “Breaking points appear.”

A diary is a daily practice of pouring out. It insists on forward motion, like the procession of footsteps the camino requires. Within those structures, Carson crafts a speaker whose vast and disparate inquiries engulf the reader in a fevered, feminine, consummately human voice. Just like the folktales about queens, murderers, and thieves, the speaker’s account switches and sparks; “Horizon beats upon the eyes.” Where does a pilgrimage end?