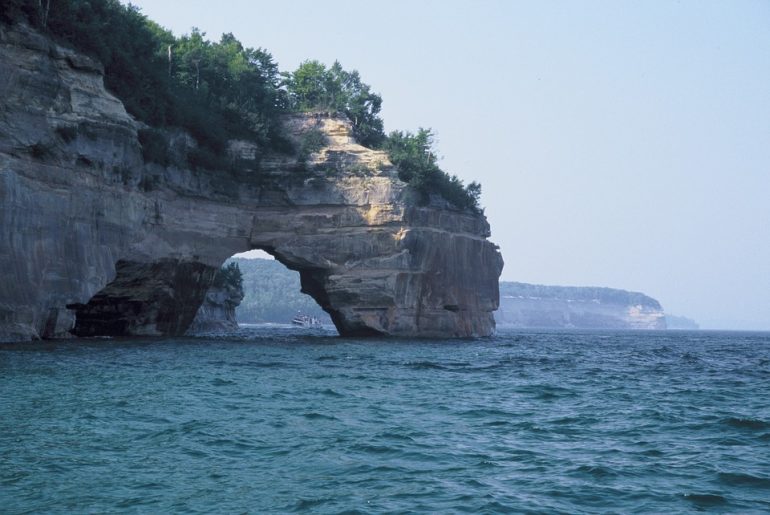 My sophomore year of college, I found myself obsessed with geologic inquiry: I reveled in its precision, its dedication to the act of witness in spite of incomplete evidence. Every geologic inference must be based in observation, every perception cataloged. Geology’s scientific method is distinct from the other sciences in which hypotheses are typically tested through experimentation. It’s more like history or archaeology: a process of searching through what artifacts remain, inferring a broader terrestrial meaning.

When geologists examine an outcrop, they know that the visible rock units are not necessarily presented in the order in which they formed. Units might have been pinched out or folded—they might have faulted straight through. They might have metamorphosed from their original composition into something new—some may have weathered away. Yet these fragments are evidence toward the larger story of a place.

In blood the minerals
of the rock

Lorine Niedecker’s poem “Lake Superior” cracks open the human history of its eponymous source. Its thirteen fragments splice together geologic details, explorers’ diaries, and firsthand observations to trace white settlers’ incursions into “America’s / Northwest.” She treats research and perception like a geologist treats a rock, as a concrete observation around which a narrative coheres.

It’s rare to find a complete, preserved account of the earth from any given period in time. Erosion erases the record. You have to piece together the evidence from whatever artifacts remain. While “Lake Superior” was originally published in 1968 in England, Niedecker’s work captured a new interest from feminist scholars in the early 2000s. In 2013, Wave Books published Lake Superior: Lorine Niedecker’s Poem and Journal Along with Other Sources, Documents, and Readings. This slim, resplendent volume traces the poem’s origins in a form akin to the poem’s own nonsequential chronicle of the lake.

The book begins with a clean, airy printing of “Lake Superior.” Within the texts that follow, Wave intersperses facsimiles of Niedecker’s typescripts, ending the book with her handwritten geology notes. Each facsimile is visually arresting; the dark background of the approximated typing paper is inlaid into Lake Superior’s stark white page, linking this volume’s pages with the physical act of writing and the world which Niedecker so acutely observed.

Niedecker began gathering material for “Lake Superior” when she worked as an editor at the WPA’s Federal Writers Project. She contributed historical, folkloric, and scientific research to the guidebook Wisconsin: A Guide to the Badger State (1941), in which “Trip 14A” was first published. The reprinted selection from the guidebook highlights place names in small caps, emphasizing the artifacts of language Niedecker selected for the poem. In “Lake Superior Country,” the journal from her 1966 road trip around Lake Superior, she wrote, “How does Sault Sainte Marie—for instance Sault become Soo? Indian-French-English.” The poem treats naming as evidence of the conquest’s mark upon the land:

Schoolcraft’s journals became fodder for Longfellow’s (in)famous “Song of Hiawatha,” but Niedecker’s journals and poem make no mention of other poets’ interpretations of Lake Superior. Instead, she focused on firsthand accounts. At the Federal Writers Project, Niedecker worked with the great naturalist Aldo Leopold, whose essay “On a Monument to a Pigeon” appears in this volume. In context with diaries written by European interlopers Pierre Espirit Radisson (1661) and Henry Rowe Schoolcraft (1832), Leopold’s essay offers a damning critique of the Midwest’s burgeoning industry. The occasion of Leopold’s essay was the dedication of a statue erected in memory of the Passenger Pigeon, a species driven to extinction by human hunters. He writes, “Men still live who, in their youth, remember pigeons. Trees still live who, in their youth, were shaken by a living wind. But a decade hence only the oldest oaks will remember, and at long last only the hills will know.” While there’s no concrete historical link between Leopold’s essay and Niedecker’s poem, her fragment carries the gravity of Leopold’s words:

Niedecker’s precise, imagistic fragments take inspiration from geologic and historical logs, and their elisions prove as important as their details. “[T]hat bird” lives in “cobalt and carnelian” mineral names borrowed for colors (or is it vice-versa?)—names left as detritus on rocks and creatures, names that will weather away.

The Wave Books compilation elides an introduction, as well as an editor’s name; its single scholarly essay adds little in a volume of thrilling primary sources. These excerpts refuse any single perspective. Like a geologic interpreter, the reader is left to reconcile Niedecker’s “vast, massive, glorious corruption of rock and language.” I take this challenge as an invocation: let such fragments resonate in new contexts, again and again and again.