Home
»
Book Reviews
»
Nonfiction
»
In Bookstores Near You

In 1995, Dennis Covington’s breakout book, Salvation on Sand Mountain (Addison-Wesley), told the story of his immersion into the world of snakehandling, faith healing, and the fervent religious sects of the Appalachians. Back then, his search for renewal was triggered when, as a stringer for the New York Times, he covered the trial of Glen Summerford, pastor of the Church of Jesus with Signs Following, for the attempted murder of his wife. Summerford’s weapon: rattlesnakes. The testimony, the courtroom drama, the spectators, and the religious fervor seduced Covington, who eventually began handling snakes himself. His next memoir, Cleaving (North Point Press, 2000), was beautifully co-written with his wife and traced the history of their turbulent marriage as well as their attempts to drill fresh water wells for the impoverished in El Salvador. Once again, storytelling mapped Covington’s continued quest for faith—or, in the case of Cleaving, perhaps the loss of it.

In his sixties, Covington has found himself once again questioning what faith is and whether or not, at his age, he has any means by which to express it. In the opening pages of his new book, Revelation: A Search for Faith in a Violent Religious World, Covington writes:

I began to reimagine faith as an action rather than a set of beliefs, as something that anyone, believer or not, could initiate if only given the time and the means. I was no longer physically able to do many things, but I could still write, so in my sixties, I decided . . . to go to places where people were subject to extremity, as [Christ’s] followers like Saint Peter and Saint Paul had been, and as the generations that came after them would be, the ones who’d be “mocked, imprisoned, stoned, sawn asunder, tempted, and slain with the sword.”

An epic tale, Revelation follows Dennis through his past and his present, from Birmingham, Alabama, to Lubbock, Texas, then from an asylum in Ciudad Juárez to Turkey, and eventually across the border into the war zone of Syria, where American reporters were being kidnapped by ISIS on a routine basis. Here, where the bulk of the book takes place, Covington immerses himself in the world of humanitarian aid workers, journalists, and rebel guides. The cast of characters teaches many lessons—but not all of them are conducive to the restoration of spirituality, much less a belief in humanity.

While the book jumps back and forth in time, and geographically hurdles from one destination to another, Covington keeps his theme focused. He tries on different metaphors for faith, including tired classics like “Faith is a fruit of the Spirit,” which he only uses to launch into more imaginative, even controversial, figurative renderings. In Juarez, faith is the insane asylum patients bathing one another and clipping each other’s toenails. In Syria, faith becomes a cup of tea, heated with canned gas and a Bunsen burner, and shared by rebel soldiers and guides, the men keeping quiet afterwards, a kind of peace that is, Covington says, faith—for without it, survival is impossible.

Throughout the book runs the refrain: “God is all we have,” which undeniably echoes the call for prayers that American conservatives frequently offer after mass shootings on our own soil. In our current sociopolitical environment, the line is frequently an indication that action is not forthcoming—faith will remain an inward philosophy, a private conversation with God, rather than an outward manifestation. In Revelation, Covington interprets the line in various ways: perhaps it means that God is sufficient for all our needs; perhaps it means God is our last resort, our only remaining hope. Eventually, Covington reads the line as a desperate prayer, one that recalls the old gospel hymn, “He’s All I Need.”

There is no navel-gazing here. This is narrative nonfiction at its best, when it requires more than a writer’s memories and feelings: it requires effort, research, even risk. Make no mistake: the writing of this book cost Covington. During the fighting in Aleppo, Syria, he felt something shift internally in his head; several months later, back in the States, struggling with his thoughts and emotions, he checked himself into a mental ward and eventually discovered he had suffered a subdural hematoma, a severe traumatic brain injury (TBI).

Nor does this book require only a small fee in regards to Covington’s faith. He asks some tough questions here, and he does not find nor provide comforting answers. In many ways, while Cleaving outlined the unraveling of a marriage, Revelation draws a line between faith and God, and suggests that neither necessarily needs the other to exist. 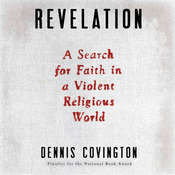