Home
»
Book Reviews
»
Fiction
»
In Bookstores Near You

In 2004, the state of Texas most likely executed an innocent man, Cameron Todd Willingham, for the murder of his three young children, who died in a fire in their family home. Arson experts later determined the fire was not intentionally set, and the story quickly became enmeshed in a political scandal involving Rick Perry. Interestingly, Willingham, who escaped with only minor burns, had such a poor reputation in the small town of Corsicana, Texas, that when PBS produced a documentary about his execution and probable innocence, many of the residents refused to accept he wasn’t guilty. One woman said he was a bad man, plain and simple, and it didn’t matter if he didn’t do it. He deserved to die regardless. Having worked with defense teams on over twenty capital murder cases since 2009, I’ve learned the most intriguing part of these investigations isn’t the whodunit part of the story, but how witnesses affect the outcome, how willing they are to lie to convict someone, to shape the story into a tale they want to believe.

In his latest novel, Late One Night, Lee Martin explores how a town unravels into gossip and accusations after a man’s wife and three of his seven children die in a fire that destroys their mobile home. Martin writes this tale as if he’s followed death penalty cases and investigations for years. For example, Ronnie Black, the accused, has a background similar to many of the men and women charged with capital murder: he was orphaned young and farmed out to one foster home after another. And he’s reputed to be “just mean and tricky enough to do some damage if the punching and gouging got going.” In fact, weeks before the fire, Ronnie throws lit matches at his wife until he accidentally catches her hair on fire. Ultimately, it’s just easier for everyone to believe in Ronnie Black’s guilt over his innocence.

Typically, mysteries move in chronological fashion, landing on the big reveal—the perpetrator’s identity—in the final pages. But Martin understands narrative structure and the way a story’s climax isn’t always the obvious moment. Chapter 1 works like a prologue, situating the reader in the critical moment when Sheriff Biggs interrogates Ronnie: “You better start talking. You better tell me something I’ll believe.” It’s a moment we won’t return to until early in the last third of the book. Chapter 2 jumps backward to the tragic scene of the fire, as neighbors attempt to help Della Black remove her seven kids from the burning trailer, handing them out the front door, one by one, to safety. When Della goes back for the baby and two of the younger children, the trailer collapses in flames, and later, their bodies are found inside, huddled in a corner and clinging to one another. Which sounds like it could easily serve as the novel’s climactic moment.

But the rest of the story follows the more complicated path of how? and why? How did Della and Ronnie Black reach this moment in their marriage? Why are people so willing to believe he’s guilty? Martin explores the days and hours beforehand, taking a close look at the Blacks’ marriage, but then moves forward in time, after the fire. As it turns out, as in real-life murder investigations, lots of the residents in Golden Gate have their own motives for accusing Ronnie, and their motives consume them, transforming a single father into a man willing to lie to protect his intellectually disabled child and a barren woman into a desperate lady who will love Ronnie’s other four children, and love them fiercely, if only she can wrangle custody of them away from Ronnie. Even Ronnie’s mistress, Brandi Tate, plays her own role in his downfall after she finds his favorite T-shirt reeking of gasoline and hidden in his car. How will this town solve the mystery of the trailer fire without simply writing the conclusion to the story that’s convenient for them?

This isn’t the first time Martin has tackled capital murder. In The Bright Forever (Shaye Areheart, 2005), which was a finalist for the 2005 Pulitzer Prize, two of the main characters kidnap and murder a young girl, Katie Mackey. Martin tells you from the earliest chapters that these two men are guilty; their guilt isn’t the story. Again, it’s the how? and why? How does a devoted math tutor, one who longs to have his own child, become a man who harms his beloved pupil? Why does he partner with a drug addict, whose blackouts erase large amounts of his memory, to commit this horrible crime? And how will the girl’s father respond? Like Late One Night, The Bright Forever has a cast of many voices—because Martin recognizes that good stories, the ones we long to hear, the ones that show us something about life, are never one-sided.

And if you’re looking for a Father’s Day gift for someone who loves to read, whether a loving father or a friend who always wishes they had a good one, Martin’s work offers something special. Despite never having children himself, Lee Martin understands that “fatherhood” is a complicated story. In The Bright Forever, Katie Mackey’s dad has to decide how he’ll handle the rage that guts him when his daughter disappears. What is the right thing to do when two men kidnap and torture your child? What makes a man a father? And Martin’s very first memoir, From Our House (Dutton, 2000), takes a generous, gracious look at Martin’s own dad, a once independent farmer who lost both hands in a corn picker when Martin was a baby. Robbed of his identity, Martin’s father unleashes the kind of wrath that can destroy Martin and his mother, and yet, even here, Martin realizes the story of fatherhood is tragically complicated. There’s no self-pity or bellyaching, but rather the kind of memoir that digs deep and, in the effort of it, uncovers compassion and understanding.

Certainly, in Late One Night, Ronnie Black won’t win “Father of the Year” any time soon, and yet he manages to hold his family together, at least saving his girls from the same fate that disrupted his childhood. In the final pages, Martin delivers one last secret, the one that establishes the humanity of Ronnie Black and gives him the power to save the entire town of Golden Gate, Illinois, if only they will all stop talking and listen instead. 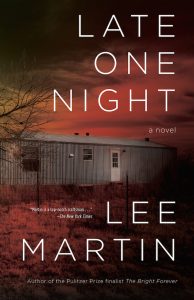