Home
»
Book Reviews
»
Nonfiction
»
In Bookstores Near You

In 2003, Kelcey Parker Ervick took her first trip to Prague and began an affair with the city, so much so that when she returned to her graduate program the next fall, she couldn’t stomach her classmates’ insistence that the castles in the Czech Republic and in Kafka’s work were only metaphors. They aren’t figurative, she told her peers; in Europe, castles are “everywhere and real,” an element of setting that colors the stories people tell there.

Ervick’s travels to Prague were supposed to spawn a novel, one with plot twists and a happy ending, a traditional bestseller. Instead, she found the fairy tales of Božena Němcová and couldn’t help but investigate the “mother of Czech prose,” the title bestowed upon Němcová by Milan Kundera. Despite Němcová’s success publishing The Grandmother—the country’s beloved “folktale” novel, the first novel published in the Czech language—her husband taunted her when she was ill: “You will croak behind a fence. Nobody will even spit at you.” History itself has written a similar narrative for Němcová, the one that people want to hear. Because Němcová defied social mores, taking many lovers and expressing outwardly her unhappiness in marriage, people chose to believe she was sad, bitter even, spurned in all of her affairs. She led a tragic life, they insist. Yes, her son died at fifteen, and Němcová herself suffered domestic violence, devastating poverty, and eventually terminal cancer in her early forties, but her troubles led her to writing, to a freedom and passion that finally gave her what love never did.

In The Bitter Life of Božena Němcová (Rose Metal Press), Ervick fractures traditional notions of biography and memoir in order to piece together the truest portrait of Němcová—a woman who was and wasn’t a wife, who was and wasn’t bitter, and whose face—a female face!—eventually earned a place on the 500 Crown note. The book is a collection of fragmented memories, offered by Němcová’s children, lovers, husband, enemies, critics, and even strangers. There are sequences that riff off single ideas and words—happiness, dreams, sleep, bitterness—and Ervick slyly shifts the meaning of these words as she moves from clip to clip. What we think we know about Němcová transforms magically as Ervick juxtaposes, in just the right order, the recollections of others, clips from Němcová’s stories and fairy tales, as well as letters she wrote to so many people. In places, Ervick offers a snippet of text, then vanishes some of the words, and by doing so, changes the text again, uncovering buried meaning in what was already before our eyes. To the narrative, she adds pieces of original art, collages of cutout photos of key people and fractured texts, one photograph set on top of another—a visual representation of Němcová’s shattered but expressive life.

But Ervick doesn’t stop with Němcová’s splintered story. In chasing after this Czech literary figure, Ervick begins to question her own life, her choice to stay in a marriage where happiness is a “heap of half-broken things” she’s mistakenly been calling “togetherness.” In assembling the pieces of Němcová’s life, Ervick begins taking hers apart and putting it back together, too, and frequently her experiences eerily mirror Němcová’s. The last third of the book is a series of postcards from Ervick to Němcová, written in philosophical, lyric language; in these messages, Ervick explains how she came to write something other than the best-selling love story she intended, how she will come to enact the love story instead of writing it … by following Němcová’s example.

By the end of the book, it is clear that Němcová was never confined to her motherly role—whether as mother to her own children or of the Czech literary canon. She was simply herself—complicated and articulate and passionate. Ervick’s un-biography gives us a historical tale that translates today into a contemporary one: how women can take possession of their fates, write their stories as they see fit, even when living under the iron fist of societal pressures or men afraid of female power. 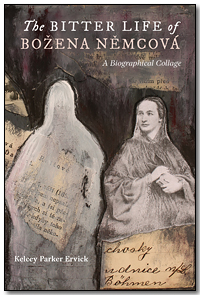