When Donika Kelly’s debut collection of poetry, Bestiary, was released barely one month ago, it came as the winner of the Cave Canem Poetry Prize and a long-listed nominee for the 2016 National Book Award. From page one, it’s obvious why: magic possesses this book, the kind that transforms objects and ideas and the knowledge we thought we knew, so thoroughly that Kelly seems to speak a new language.

In “Out West,” the starting poem, “you” cannot bear being human, and so, human that she is, she becomes creature, both proper and mythical. Her shadow, morning and evening, takes an alias: Rabbit and Spur. Cows and sheep graze in her pocket; black bears winter in her ears. The speaker is wilderness, the beasts of the collection’s title taking residence in her voice. Every word appears to mean something it couldn’t before.

In “Catalogue,” “you,” again, is initially a bird — not the old-fashioned metaphor that punishes (as in, tarred and feathered), but rather the endangered one, the small sparrow that itself is easily “pulped and feathered.” In the next stanza, “you” is a 19th-century poem: “All of America is inside you, / a catalogue of lives and land / and burrowing things.” In another poem —“Where she is opened. Where she is closed.”— the speaker describes possession as an autopsy, the possessor making a Y-cut slit along the victim’s sternum, then cracking “the hinge of ribs” and “evacuat[ing] her organs.” Afterward, by curling inside the remaining hide, as if to keep warm, the possessor becomes heart, lungs, and stomach — the necessary organs the possessed cannot live without. In this way, Kelly addresses molestation, the forced attachment of the child to harm, to the parent who harms, to the memory of it always burrowed inside her.

Slowly, as the collection moves from the opening poem, “Out West,” to the other horizon of the final poem, “Back East,” Kelly starts to question the curative powers of metaphor. In “Little Box,” the dollhouse that helped a child understand safe familial roles during therapy sessions becomes the very mechanism by which the speaker repeats the trauma: “You will no longer speak to the woman who has your heart. / You will put her in the room farthest away from your own. / She will sleep where the father should be.” In “Love Poem: Griffon,” assigning positive symbolic meaning no longer seems like the answer: the mythological griffon standing guard is always waiting, and we “[c]all the waiting / not what it is, / foolish, but / a kind of bravery, / a kind of patience. / Kindness,” though it is not. The Griffon offers a gift from its paw, which is really a talon, the gift really a small boy caught on the hook. When the beast reveals the boy, it does so only that the speaker might learn “what fear looks like / in a small face.”

As Kelly weaves and then unweaves this world of mythical and real beasts, birds rise overhead then drop down to roost in her stanzas. The bower, with his mating habit of offering blue to potential lovers, appears and reappears in various poems — like Kelly’s mother always resurrecting herself, or like Kelly’s memory of her father. There are swallows, secretary birds, red birds, even Pegasus — a stallion who has much in common with birds. It’s no wonder that the transformative ability of flight attracts Kelly: in “Fourth Grade Autobiography,” we see her “lie in the grass and wonder who writes / in the sky.” We see her “imagine / my name, a cloud drifting.” Throughout the collection, Kelly fights to be heard, the nutbrown hen no one listens to. There is movement and healing in this collection; by the end, “Back East,” flight is the one mythological, beastly power Kelly clings to: in the final stanzas, she is no longer sitting still, but moving quickly across the plains, the mountains to her north, and her hand filled with the sky. 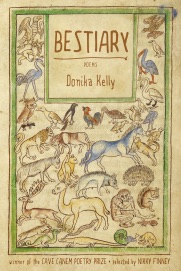