Home
»
Book Reviews
»
Fiction
»
In Bookstores Near You

In her latest novel, Silence & Song, Melanie Rae Thon once again wanders into the world of devastation. The opening clip captures a fiery car accident, one that could have been avoided if only the father, the driver, had agreed to stop at a hotel for the night instead of pressing onward into the blue night. Easily, Thon could have written an entire book about this one family in the aftermath: after all, the first section’s epigraph tells us this is a story about grief and the various means we have of grappling with it: tears, silence, or song.

But Thon has never taken the easy route. She isn’t a writer who panders to traditional expectations, but rather goes about questioning what narrative can accomplish, how inclusive it can be, just what magic it can manage.

Sweet Hearts (Washington Square Press, paper edition, 2002) made use of a first-person peripheral narrator, a rare thing. The story of Marie Zimmer’s troubled nephew and niece—her hope that they might find grace in this world—consumes her. But in telling their story, she narrates her own life—as well as those of her sister, her father, her mother. In Voice of the River (FC2, 2011), Thon offers the story of an entire community: multiple voices, multiple generations, all of them hunting a young boy, Kai, who has leapt into a frozen river to save his dog.

Thon’s books are intense—she is a fierce writer. There’s no easy, quick route through her pages. Like Kai, the reader must jump in and willingly float where the words course.

Broken into three seemingly distinct stories, Silence & Song is no different. Here, Thon begins with one family’s car accident, then leads us to Chernobyl, water stations in the Sonoran desert, a multilingual literacy center for children in Salt Lake City, the scene of a murder, the wild world of the animal kingdom, black holes, stars. The book resounds with echoes: in it, time seems indeed to move in different speeds . . . in both directions. The three female narrators could be the same woman. The Sonoran desert where immigrants cross in obscurity, dying of thirst, could just as easily be the “Zone of Alienation” at Chernobyl. Does the brother in the first novella shoot a middle-aged Good Samaritan or the convenience store clerk in the closing story? In this way, Thon’s latest novel teaches us that the components of any life can be rearranged endlessly, the outcome always unpredictable. One could read this book a million times and forever find some new secret, some new revelation. By the final page, on which sentences literally collapse into ellipses, Thon has proven her narrator’s earliest hypothesis: lying under the desert stars, contemplating the cataclysmic event in her family’s life, the arc of the universe, the power of flame, Rosana acknowledges, “Yes, everything here, now, again, always.” 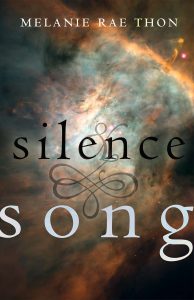