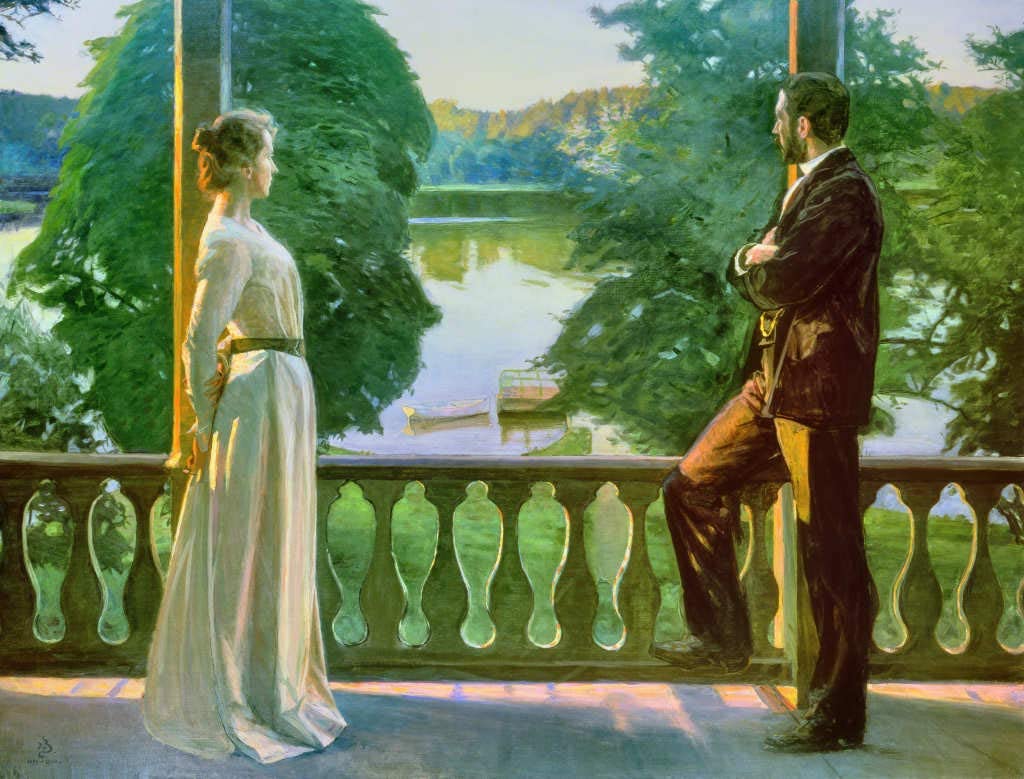 When I was about thirteen, and even more insecure about my literary tastes than I am now, I got into a conversation with someone who referred to Jane Austen as “light.” I was horrified. Austen was romantic, of course, but her novels were important. They had depth! They absolutely could not be light, or the self-satisfaction I got from reading them, patting myself on the back for enjoying serious literature, would be completely ruined.

I still remember my mom’s response when I blurted these half-formed anxieties to her. “Just because something is light,” she said, “doesn’t mean it isn’t good.”

My tastes have remained stubbornly popular, drifting towards the romantic, charming, and funny as much as the serious and consciously literary, so I think of what she said often. Recently I discovered Stella Gibbons’s Cold Comfort Farm and Dodie Smith’s I Capture the Castle, which are very light and contain some of the most fascinating commentary on pre-and-post-WWII gender roles that I’ve encountered, lending further credence to her reassurance.

Published in 1932 and 1948, respectively, Cold Comfort Farm and I Capture the Castle share a checkered history that does not include an extensive critical legacy. Angry that novelist Elizabeth Bowen was overlooked in favor of Gibbons for the Femina Vie Heureuse Prize, Virginia Woolf wrote, “Who is she? What is this book?”; Smith’s novel was out of print in the United States for many years. In fact, it’s very common to see these two books classified as “comfort reads,” books to read for pleasure and escapism, and that are preoccupied with stereotypically feminine concerns, like social class and marriage.

Categorizing them in this way is a double-edged sword, as the protagonists of both are obsessed with physical and monetary comfort and security. They hold shades of Austen, but neither Gibbons’s Flora Poste nor Smith’s Cassandra Mortmain are in the mold of characters like Lizzie Bennet or Anne Elliott. They are too transparent, too blunt about their financial struggles and how they intend to fix them. Wealth is the seething undercurrent of Austen’s novels, but here the subtext is laid bare, revealing how vital financial security is to these heroines’ sense of self.

Cold Comfort Farm uses a comedic premise to dig into Flora Poste’s dissatisfaction with the genteel path her upbringing has prepared her for. Left with only a small income after her parents’ death, Flora is “discovered to possess every art and grace save that of earning her own living.” More to the point, none of the employment options open to her hold any appeal. She is the kind of person who, in her own words, “like[s] having everything very tidy and calm. . . and not being bothered to do things,” and she is determined to hold fast to this core of her personality by leeching off of others instead of slogging through a job that leaves her unfulfilled. Understanding that “whereas there still lingers some absurd prejudice against living on one’s friends, no limits are set. . . to the amount one may impose upon one’s relatives,” she decides to find relatives to live with while she decides what to do with the rest of her life.

Flora may not have the money to support the life she wants, but what she doesn’t lack is the resolution to make that goal possible in spite of her circumstances. Once she has fixed her sights on finding a batch of relatives to live off of, she begins searching for the perfect match with self-aware precision. Knowing she will need something to keep her occupied, she decides to find a relative who she can “take . . . in hand” and “alter his or her character and mode of living to suit my own taste.” To return to the Austen comparison, it’s as if Lady Catherine de Bourgh were the heroine of Pride and Prejudice: Flora sees only one correct way of doing things—hers—and she is far from shy about forcing her will on others.

Her intervention proves to be sorely needed at the titular Cold Comfort Farm, home of her paternal cousins the Starkadders. In a parody of the rural novels popular when Gibbons was writing, each of the cousins is beset by melodrama stemming more from a lack of common sense than tragic fate. From Adam Lambsbreath, who refuses to wash dishes with anything but a twig, to Aunt Ada Doom, obsessed with an unspecified horror she stumbled on “in the woodshed” as a toddler, all could do with some of Flora’s unbending practicality. But the transformation that the plot hinges on is Elfine’s, her teenage cousin. By coaching Elfine from a gawky, lovestruck girl into a miniature of herself, Flora is able to prove the validity of her identity and even secure a fresh start for the struggling farm.

Flora shows how the practicality and single-mindedness that come naturally to her are more than enough to capture the attention of an eligible, well-off young man. Elfine is enamored with local aristocrat Richard Hawk-Monitor, but Flora is quick to note that her unpolished manner won’t be much help in catching his attention: “The eccentricity of her dress, behaviour and hairdressing would put him off automatically.” Recognizing the shallowness of Richard’s standards, she is quick to put her plans of improving Elfine into practice. It’s important to note that Flora doesn’t intend to crush Elfine’s spirit. Instead, she plans to engineer her welfare so she will have the ability to live with comfort and agency; “her life would be one of exquisite, sunny natural content.” Most importantly, Elfine’s marriage is “a victory for Flora’s philosophy,” allowing it to triumph over Starkadder pessimism. With Elfine happily married and the farm reinvigorated, Flora is able to leave Cold Comfort knowing that her determination to stay true to herself brings not only success but productivity, her inherent talents allowing her to ensure financial security just as effectively as the employment she refused.

If Cold Comfort Farm posits relentless control of others as the avenue women must tread in order to gain autonomy, I Capture the Castle offers a more nuanced portrayal of these issues while still maintaining that money is a crucial component of women’s independence and satisfaction. Unlike Flora, Cassandra doesn’t choose to live with her relatives. Instead, the seventeen-year-old is stuck in a charming but decrepit castle in rural England, struggling with her precocious siblings and bohemian stepmother to make ends meet while they wait for her father, a once-famous modernist writer, to get over a yearslong case of writer’s block that has impoverished the family. With limited education and opportunities, Cassandra recognizes the narrow resources she can draw on. “Surely there is enough intelligence among us to earn [money], or marry some,” she remarks in the novel’s opening chapters. Her older sister Rose is even more adamant, claiming, “I could marry the Devil himself if he had some money.” Rose shortly makes good on that promise, engaging herself to a man she has little interest in or affection for because of his sizeable inheritance.

I Capture the Castle, like Cold Comfort Farm, is a narrative of control, but of a very different stripe. Cassandra begins as an accomplice in Rose’s plans, but soon realizes the cruelty of their pragmatism when she falls in love with Rose’s fiancé, Simon. The deceit proves too much for Rose, as well, who breaks off the engagement and elopes with Simon’s brother. Reflecting on the emotional turmoil of the events, Cassandra admits that “it isn’t a very good game; the people you play it with are apt to get hurt.” The control that she can have is over the structure she gives to her life: since the novel is presented as her diary, Cassandra is able to write her way to independence, finding meaning from her melancholy first love and using that meaning to engineer her family’s financial liberation.

From her entanglement with Rose and Simon, Cassandra learns that she cannot force the hands of those who don’t want to be helped. Before her elopement, Rose confides in Cassandra about her guilt, but refuses to break things off with Simon, even though she knows Cassandra is in love with him. The prospect of financial security is a benefit she doesn’t feel she can give up unless she knew Cassandra would be able to secure it in her place—“I know he wouldn’t fall in love with you,” she says. “He just thinks of you as a little girl.” With Rose refusing to admit that marrying a man she knows she can’t love is immoral and cruel, Cassandra turns her attentions to the family member she can help: their father.

As one of the novel’s most humorous and infuriating characters, James Mortmain is the perfect foil for his daughter, letting his creative fears overcome his obligations to provide for his family. Cassandra may long for physical comforts like plenty of food and well-made clothes, but James is perfectly willing to hide from his family in a poorly heated gatehouse rather than attempt a second novel and risk failure. “[H]e really is very pathetic,” writes Cassandra, “But he might at least do a little work in the garden.” As a writer herself, she can sympathize with his artistic fears, but after experiencing the physical and emotional hardships his neglect has forced the family into, she is determined to nudge him into productivity.

With the help of her brother, Cassandra locks James in a castle tower until he begins to write. This gamble pays off only because James has already begun the process of change himself. His recent eccentric behavior, from covering the gatehouse hall with newspaper cartoons to an obsession with fishbones, has all been research for the new book that Cassandra’s plan forces him to finally begin. By the novel’s end, publication of early chapters has enabled the family to be self-sufficient again. Shortly after, Cassandra, realizing that he is still in love with Rose, gently turns down Simon’s proposal, looking forward to secretarial courses instead of marriage. By working not towards what she wanted but with what was possible, she is able to discover that independence is more valuable than a hollow romance, unearthing personal integrity as well as the financial security she had longed so desperately for.

The message ingrained in both Cold Comfort Farm and I Capture the Castle is deeply countercultural. Instead of being chastised for their focus on material comforts like money and living space, Flora and Cassandra prove that these considerations are crucial if a woman is to build a satisfying life for herself, with or without a man. It’s little wonder, then, that both texts resist critical interpretation. Gibbons begins her book with a parodic foreword mocking literary criticism and pretensions, while Cassandra is confused by her father’s modernist writing, asking “why are they supposed to be more than puzzles and problems?” Yet somehow, the radical themes in the books have gone largely unremarked for decades. At the same time, these novels have been read and enjoyed by thousands, quietly posing the suggestion that to be concerned with comfort is not shallow, but merely practical, and that taking control of your surroundings, either forcefully or with empathy, can lead to self-actualization. It’s an outcome Flora and Cassandra would no doubt approve of.