Home
»
Critical Essays
»
In Defense of the Reading 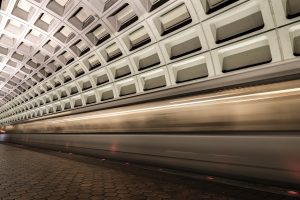 For all its other attributes, Washington DC—where I live—is a superb book town. Maybe it’s not New York or San Francisco, but people love to read here—on the Metro, in line for coffee, riding in the HOV lane or waiting for a significant other to finish soaking in a museum exhibit. I’ve even caught a few dedicated readers squeezing in a sentence while waiting for the traffic light to turn. Mix in the National Book Festival, a slew of smaller fairs with some top-shelf independent bookstores, and DC is a must-stop for authors on tour.

And boy, have I taken advantage of this in the past couple of years or so. Thanks mostly to the incredible work of the local bookstore chain Politics and Prose, I’ve seen some of my favorite authors and chatted, oh so briefly, with them after collecting their signatures. For someone who loves listening to authors talk, my cup runneth over.

It’s true that authors have more ways than ever to promote their work—social media and podcasts being the latest methods to do so. For my money, however, the most rewarding for authors and readers alike, is still the Author Public Reading. The right podcast, TV spot, or magazine profile may help the author move more copies of his or her work, but talking to readers in the flesh is more fulfilling. And aren’t deeper, more intimate experiences central to the reasons why we read and why we write?

Earlier this year, I saw Viet Thanh Nguyen and Roxane Gay appear together without an interviewer. Both writers are at the nexus of our cultural moment, but write about it in starkly different ways. Nguyen is best known for fictionalizing the immigrant experience whereas Gay writes frequently about the personal challenges she’s faced as a woman and person of color. The decision to pair them was inspired. Both are professors, so they know how to draw out a point and guide a conversation. One’s distinctive experience had the effect of illuminating the other: you saw and heard how much they have in common. Intellectually, I’ve always known literature had the power to bind people. Nguyen and Gay put that belief into practice.

Each portion of the author reading is an opportunity to take one’s relationship with literature, or an author deeper. Like the conversation element of Nguyen’s and Gay’s event, readings with Q&As expand the experience of literature. Readers who step to the microphone ask for elaboration on a point mentioned minutes earlier, or in a radio interview they’d heard earlier that week. They’ll ask about themes they’ve detected in the author’s oeuvre. The responses authors give always shine light on often unconsidered elements of a piece of work.

It’s important for organizers of the readings to know the author’s strengths and to structure the event around them, adding in elements that will allow the author to show off, and deleting those that will be less engaging for the audience. And I suspect the authors make their preferences known. This was the case for Terry Tempest Williams, who took questions but spent a good portion of her time reading from her book about national parks. Her passion for the topic was plain. To hear Terry Tempest Williams speak is to know immediately that she carries a love and a kind of sadness for the natural world. That comes out in her words and it comes out in her voice. This is an added benefit of the author reading for me: whenever I read the work of an author I’ve seen in person, I hear their voice. I doubt I’m alone in my enjoyment of hearing the voice of the mind that created the piece.

This is especially true of Mohsin Hamid. His voice is elegant and cosmopolitan, like his writing. He could make a fine living as a radio announcer. When he reads his own words, I am transported to Bangalore or California or New York or wherever he wants to take me. As he read from “Exit West” at Politics and Prose in DC, I closed my eyes so I could focus on the sound of his voice.

For every reader who attends an author’s event, there is something about that writer that they like, a strand which they’ve grabbed on to and want to hold. They might not be able to put a name to the strand, but they know it when they see it. This affinity demands exploration on the reader’s part. There is always something more to know for the most avid readers.