Home
»
Reading
»
In the Colectivo 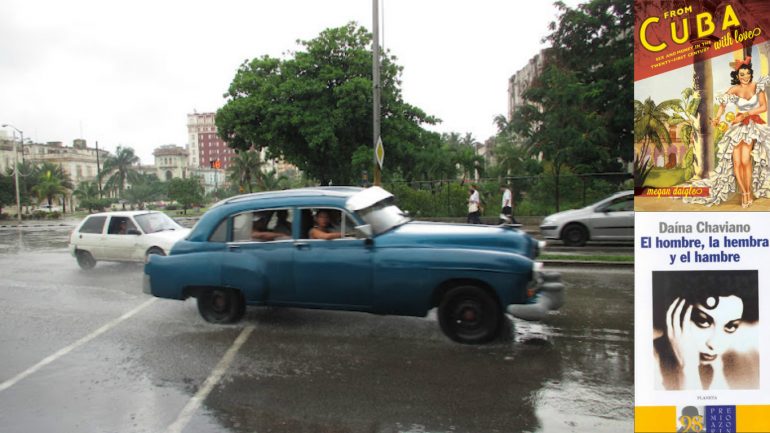 In Havana, the collective taxis near the capitol line up on the street that juts out from the Hotel Inglaterra, around the corner from its big patio café with its striped awning and wicker chairs, across from the Parque Central, down a small alley that leads off into the confusion of Centro Habana. There’s sometimes a man there expediting, and he looks at you impatiently, asking, “¿Pa’onde va?”

And you tell him Linea or Dieciocho and he points you to the right car. Or if the man’s not there, you walk from car to car, asking “¿Linea?” until a driver nods and points to his seat. There are always more cars for Dieciocho. That’s how it was on this particular night, and it seemed like I had to ask twelve drivers before I found one heading in the direction of Calzada and F, where I had my room. But a driver did finally nod, and since I was the first passenger, I slid onto the upholstered front bench and asked to be let off at Linea and G.

The thing about a colectivo is that the driver makes money by keeping it full. So if you’re the first customer, you wait until three or four more people pop their heads into the cab and ask “¿Linea?” Tonight it was taking time. Eventually, the driver got out to light a cigarette, leaving me alone in his car. This was normal.

After a couple of minutes, the driver leaned in and gestured for me to get into the back. This was new. I did what I was told, though, and my former seat was taken by a couple, a pair, who had obviously made some kind of arrangement with the driver.

I had noticed the young woman on the street before, weaving along in front of me in wedge heels, black jeans, and a mandarin-collar shirt meant to look like it was made of silk. Now she was with a man in his late 50s or 60s, a man with that particular style-less-ness that marks a certain type of European tourist: oversized t-shirt, shorts over pale legs, sandals. He had an enormous belly and large, hairy ears.

“Give me a kiss,” he said to the girl, and she did. They said nothing to me or to the other two customers who had joined me on the back seat. But they knew we were there, and the man seemed to take pleasure in the fact that we knew where they were headed.

As Megan Daigle outlines in From Cuba with Love: Sex and Money in the 21st Century (2015), jineterismo isn’t exactly prostitution, but it is prostitution’s Cuban cousin. It involves sex with foreigners in exchange for gifts, dinners, and access to sites normally off-limits to locals. The women who engage in it (and men—it’s not uncommon to see female sex tourists) offer their customers a relationship: have a girlfriend, a friend, for your time on the island.

Jineterismo is not, officially, a crime, and the tendency of regular Cubans is to ignore it: my Cuban hosts and the academics I worked with on the island were great at pretending not to hear the propositions when we were out in town. But ignoring jineterismo requires an act of will. In parts of the old quarter the girls are thick as mosquitoes, sucking their teeth and calling to you if you make eye contact. Like mosquitoes, they’re annoying but navigable, not that different than the men outside of every hotel who try to get you into a taxi, or outside of every restaurant who shove menus in your face and promise you a special deal.

But there are moments that shock you, at least if you’re a naïve visitor like (I guess) I was. Like when you’re heading into a pizza parlor in a neighborhood far from the touristy parts of the city, and a woman coming out with her teenaged daughter stops to ask if you need an “amiga.”

In the novel El hombre, la hembra y el hambre (1998), Daína Chaviano suggests that, following the collapse of the Soviet Union, desperation made the jinetera into a national symbol. The book’s protagonist, Claudia, is an art historian who, dismissed from her job for complaining about government corruption, sells her body to foreigners to provide for herself and her son. Claudia stands in for the nation as a whole: the country needs to sell anything, even itself, to escape its poverty. Chaviano’s writing tends towards the fantastic. Claudia takes walks in Cuba’s past, finding herself one night walking through the city as it stood in the mid-19th Century. As Roberto González Echevarría puts it, “The city is one of the novel’s protagonists, as Chaviano describes in melancholic detail the contrast between what it used to be and what it has become.”

I was in Cuba long after the days of the “special period” of destitution that Chaviano describes. But the slackening of the desperation didn’t end the jineterismo. If anything, Cuba now might be more eager, and more practiced, at selling itself to foreigners. When I got off a bus at the wrong stop en route to Hemingway’s house, for example, I ducked into a gas station to ask for directions. The men behind the counter offered to tell me how to get there—for ten CUCs.

When I was leaving Havana, a Cuban acquaintance offered to give me a ride to the airport for 25 CUCs. The government-standard price for a taxi to the airport is 30. Of course I said yes. As he pulled up to the airport, he warned me not to say anything to the officials about our deal. “I could get in trouble for this,” he said. “I’m doing it because I’m your friend.”

But even in Cuba it’s not illegal for friends to give rides to the airport. The problem was the 25 CUCs.

But maybe that’s just bitterness about how the ride turned out: the driver, preoccupied by his arrangement with the couple, forgot about taking me to Linea and G. We shot west down Havana’s sea wall, the malecón, farther than I knew the city stretched, and then turned onto some residential streets. When it became clear to me that he had forgotten me, that he wasn’t just taking a route I didn’t know yet, I tapped him on the shoulder. He smacked his head and apologized for his mistake, braking right in the middle of the street. The girl met my eyes and smiled sympathetically. I told the driver not to worry, paid him (For what? I wondered later. For getting me lost?), and climbed out into a Havana neighborhood I had never seen and could not have imagined: I was no longer in the Havana of Carpentier or even Cabrera Infante; instead, it looked like my old neighborhood in Fort Worth—houses from the 1920s and 1930s, with small but very green hedged lawns. To add to the dreaminess of the scene, lines of elegantly dressed men and women were streaming down the sidewalks, to or from some sort of concert or massive garden party. I didn’t understand. But I wasn’t going to ask. All I wanted was to find a big street with colectivos headed in the opposite direction.