Home
»
Uncategorized
»
In the Spirit of Catherine of Siena 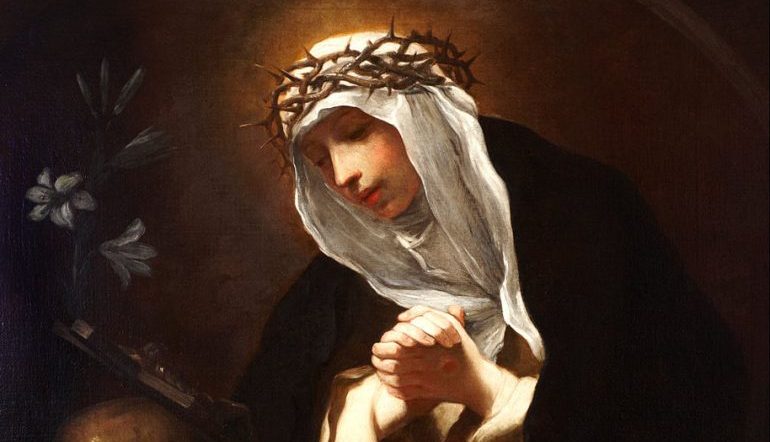 I grew up in small town in Michigan with thick-armed trees and noble Victorians, lush farm produce, a turn of the century Opera House. It’s leafy, kind, conservative, and typically Midwestern but for the blessed Adrian Dominicans–a tribe of women I sorely wish were running the world. They are lawyers, teachers, social workers, university presidents, doctors. There are philosophers and theologians, artists, therapists, and hospital administrators among them. One lawyer, also a pilot, was the first nun admitted to practice before the Supreme Court; their incoming prioress is the second. Many are exquisite musicians. They are, to a woman, fiercely smart and deeply spiritual. Of the eight kids in my family, most agree we’d be active Catholics still if the Church better reflected these women. And we go, thirstily, whenever we can attend Mass with the Adrian Dominicans. So to hear that they were being investigated by the Vatican was head-spinning.
Nineteen different U.S. women’s religious orders are being examined in what’s called an Apostolic Visitation. This news came as priests dominated headlines with more sex abuse scandals, which made the targeting of nuns even more baffling. As one exasperated Catholic wrote: “Is there a ‘Let’s See What We Can Do Next to Offend Everybody’ Committee at the Vatican?” Such investigations are seen as censorious. The only other recent apostolic visitation was of a men’s order whose founder sexually abused young seminarians, misused funds and fathered a child. Pedophile priests were still being protected as the Vatican announced this investigation of women religious in the States. The timing alone tarred the nuns and sparked outrage. It’s a “disastrous PR move,” said Rev. Thomas Reese, a Jesuit priest who contends the Vatican has “a deep suspicion of U.S. nuns because they are educated, outspoken and don’t like to be pushed around.”
Explanations for the Visitation have been anemic and shape-shifting, centering on a “concern for their welfare.” But the cause was clearly stated in a paired investigation of the Leadership Conference of Women Religious [LCWR], an umbrella group representing nearly 95 percent of U.S. women religious. A splinter group was canonically approved in 1992, taking the name used pre-Vatican II, which sums up the schism. They wear habits and take direction from the Bishops. According to Cardinal Levada, LCWR’s investigation is warranted because, despite being “warned eight years ago,” it has:

failed to “promote” the church’s teachings on three issues: the male-only priesthood, homosexuality, and the primacy of the Roman Catholic Church as the means to salvation.

Well, that’s clear. The crime is that women religious have failed to prioritize the lauding of male priests, the persecution of gays and preaching damnation or Rome. Perhaps they’re distracted by attending to more immediate human suffering, like the dying or the poor. They have also been targeted because some nuns supported the health care bill and practiced reiki. The Slovenian cardinal conducting the investigation of U.S. sisters, Franc Rodé, has stated concern for their “secularist mentality,” as well as “a certain ‘feminist’ spirit.” In an address widely believed to presage this interrogation, Rodé lamented the secularization of consecrated life and the “turmoil” since Vatican II. “In the last forty years, the Church has undergone one of her greatest crises of all times,” said the Cardinal, meaning not the sex abuse scandals but attempted liturgical renewal. “God blesses fidelity,” he stressed, “while he ‘opposes the proud.'”

I kept a lid on my reaction to all of this until the excommunication of the nun who heads a Catholic hospital in Arizona, where a young woman terminated an eleven-week old pregnancy after medical experts determined that she would have died otherwise. That morally agonized sister was immediately excommunicated, while not a single pedophile priest has been. This is the sort of injustice that drove me out of a Church I still mourn.

But I’ve no stomach for the Roman Curia and no part in this battle. American nuns don’t need me, anyway. They’re a wondrously formidable group. Take the Adrian Dominican Sisters [ADS]: They’ve educated generations in Detroit, Chicago and beyond; they sponsor two universities, have backed down major corporations, tackled issues of food safety and the environment; they oversee four non-profit hospitals and a long-term care facility. The day before her first investigative interview, their prioress was in Iraq.
Maybe some of the independence that rankles Rome came over with this order’s foremothers: four cloistered nuns from a Bavarian convent sent to New York in 1853, to help German immigrant children. No one was there to meet them, so they sat on a dock until a priest tucked them in his dirt-floored basement–because they were cloistered–and had them deliver his meals upstairs via dumbwaiter. Within three years, they had a school up and running. By 1880, they sent sisters to two parishes in Adrian, Michigan; soon more arrived to help transform an old farm house into a hospital. In 1919, they launched the college that’s now Siena Heights University. Meanwhile, they were staffing schools in Illinois, Ohio, New Mexico and Michigan, and nursing victims of tuberculosis.
The order attracted women who resembled their first mother general, Mother Camilla Madden: “strong, decisive and practical” women. They left close-knit, often poor immigrant farming families to join the Adrian Dominicans, get sterling educations, then go forth into lives they might never have had otherwise. Their adaptability, practicality and faith helped them thrive. During the Depression, despite often working without pay, the order always had a fund for the poor. Autonomy and improvisation were required, as communication and travel were difficult. Outgoing Prioress, Donna Markham, describes “a sense of freedom and responsibility, always grounded in contemplative prayer,” that marks the order from their earliest days to the present. In 1933, a newspaper wrote of the Adrian Dominicans: “The intellectual standard of the community is unsurpassed by any in the United States.” Their peerless teaching drew more candidates to their doors, “drawn to the Congregation by their naturalness, joyous outlook, and quick adjustment to conditions,” according to Seeds Scattered and Grown.
Among them was Sister Pat Hogan, who was taught by Adrian Dominicans while growing up in Chicago. Her Irish immigrant parents were thrilled when their only daughter joined the order in 1941. “I always thought this was a marvelous life,” Sr. Pat told me just before she passed suddenly. “I think it’s a shame more women don’t realize how wonderful it is, what opportunities it presents. If they only knew.” When she first joined, visits took place on Sundays. Her father “would take a notion,” as her mother put it, and board the train from Chicago to Adrian.

In those days we would come out of Mass walking in pairs, little sets of two coming out of the church quietly, heading up the sidewalk. It was pitch dark. And I would look up and see my father standing to the side, holding his hat, beaming at me. Oh! It would just make me so happy.