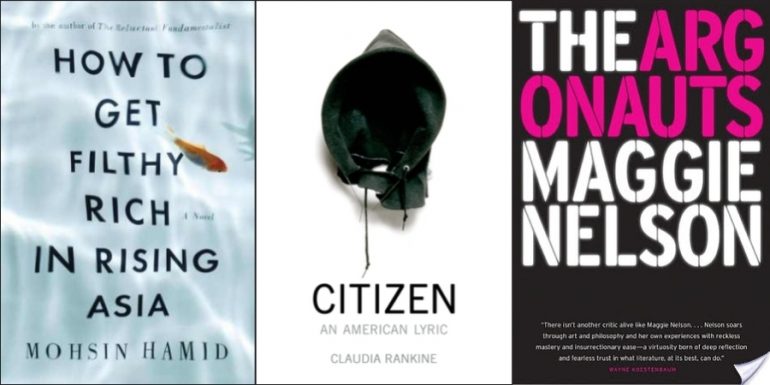 Mohsin Hamid utilizes second-person in his novel, How to Get Filthy Rich in Rising Asia, a tongue-in-cheek how-to for globalization. The unnamed narrator is born in an unnamed country and moves to an unnamed city for social mobility. “You” transcends preconceived notions of identity, and allows the reader to superimpose their own onto the narrator, which brings up questions of authorship—the writer has written the story, but the reader makes it their own. Hamid’s novel describes enough for the reader to remain grounded, but still vague enough, such as this description of the narrator’s move from the country to the city:

Dirt streets give way to paved ones, potholes grow less frequent and soon all but disappear, and the kamikaze rush of oncoming traffic vanishes, to be replaced by the enforced peace of the dual carriageway. Electricity makes its appearance, first in passing as you slip below a steel parade of high-voltage giants, then later in the form of wires running at bus-top eye level on either side of the road, and finally in streetlights and shop signs and glorious, magnificent billboards. Buildings go from mud to brick to concrete, then shoot up to an unimaginable four stories, even five.

Readers don’t need to be told every little detail about a character, or a scene, or an event. To do this underestimates the reader’s capacity for imagination, and may undermine a book aiming for a kind of inclusivity. Hamid’s book is inclusive in that it asks a reader to participate, and not physically or geographically identifying the narrator makes it easier for readers to superimpose their own identity or setting.

Claudia Rankine‘s Citizen is rooted in second-person, using the technique to convey incidents of everyday racism. A recent article in The Guardian by Paula Cocozza touches on the author’s choice in perspective:

She started writing it in the first person, but could not make it work: the stories belonged to other people, too. […] Citizen’s ‘you’ refuses to denote a single addressee, let alone one gender or one racial identity. Its referent changes from line to line. It telescopes in and out, singularises, pluralises, reverses, and its shifts keep the reader mobile, continually asking: Which one am I? Where do I fit in? It is impossible to read without questioning your own part in the racist social structures it recounts. (Cocozza)

Maggie Nelson also weaves the second person perspective throughout The Argonauts, as a way of addressing and writing about the author’s fluidly gendered partner: “Me, four months pregnant, you six months on T.” Yet Nelson also addresses the reader in much the same way: “You, reader, are alive today, reading this, because someone once adequately policed your mouth exploring.”

The former seems to employ the literary device as a way of avoiding gender pronouns altogether—one of many elements or shortcomings of language that the book examines—while the latter both circumvents constraints of gendered language and adds an inclusivity.

Nelson, Rankine and Hamid are all touching on questions of authorship—a writer writes a book, but a book is not a book if it is not read by a reader, and the reader creates their own meaning from what the writer has written. These works allow us to contemplate globalization, race, gender, and our place or role in oppressive systems, without polarizing language that feeds the exclusivity that often pervades many discussions.