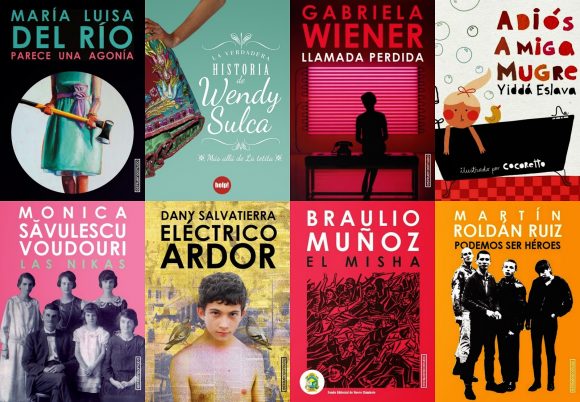 Estruendomudo was conceived in a living room somewhere in Lima, the capital of Peru. A group of writers, led by 22-year-old Álvaro Lasso, knew they wanted to publish books but acknowledged that they had yet to learn how. Thirteen years later, after first existing as a journal of poetry called Odumodneurtse, Estruendomudo is now an internationally respected house, with offices in Chile and Peru, having published the 2017 winner of the National Peruvian Literature Award, Susanne Noltenius.

The overall catalog of Estruendomudo is rather eclectic. It is composed of four “collections,” though some of the books seem to straddle categories. The largest and longest-running collection, Cuadernos Esenciales (Essential Notebooks) mainly comprises fiction titles, although fiction is not the only genre found there. In an interview for the Youtube channel about cultural news of Peru, CCElima, Lasso explains the train of thought that guided the selection of titles at Estruendomudo: “At first we published very literary things, very serious […] but we also had very conservative writers, in their way of writing. We really like extremes, so the other side of that was more realistic writing. It’s almost like not taking seriously any canon.” In that same interview, Lasso talks about how Estruendomudo’s catalog is built on quality of narrative, by the storytelling strengths of the authors. That is why Cuadernos Esenciales has both César Aira, fiction, and Gabriela Wiener, essays, among many others. All other books are divided among the press’ poetry collection, translation collection, and collection of miscellany—something called Fuera de Serie, which rounds up everything from cookbooks to graphic biographies.

In all of these collections, Estruendomudo has made it a point to publish authors, both emerging and established, from across the region and about issues facing people the world over. Writers hail from Peru to Puerto Rico, and books range analyses of Peruvian politics to Korean translations of science fiction novels. And gender equality in publishing seems to be important to the team: voices like those of Gabriela Wiener, Samanta Schweblin, and Alejandra Costamagna broaden the spectrum of themes and approaches to writing from what is usually considered (particularly in Latin America) “women’s writing.”

In addition to championing diversity within the house, Lasso has historically been an advocate for publishers across Latin America, frequently speaking and writing on the obstacles small publishers face in their efforts to preserve the culture of the region. In an interview published by the Hay Festival—an annual festival of literature and arts that is particularly important in Europe—for their Publishing Talents series of workshops and events, Lasso spoke about the importance of international publisher collaboration in the effort to strengthen the industry. In the interview Álvaro says:

There is a challenge to create our own literary scene, now publishers are going out of their local spaces. Being here is a great opportunity to see if Peruvian books can move through Mexican, Argentine, Chilean or Colombian spaces. The main idea is to have the Peruvian book, the Latin American book, circulating […] We built a net of publishers and we share stories, we share authors, we have group therapy. That helps us build and grow, and give purpose to what we do.

As Álvaro explained in his interview for the cultural festival, working across international borders, in particular, publishers can share knowledge of their home countries’ unique industries. Some struggles are shared, like the lack of state support for publishing. In 2016, Lasso wrote an op-ed for the Peruvian newspaper El Comercio lamenting this phenomenon: “A while back I tried talking with a former Minister of Education […] She told me she didn’t speak with businessmen. But businessmen are the ones making millions on state contracts,” wrote Lasso. When independent publishing houses approached the state for grants to ease the burden of attending the Bogotá Book Fair, for example, they were denied. According to standards set by the Peruvian government, these publishers were not eligible for grants—they were not considered cultural institutions.

Financial support of publishing institutions is significant when houses struggle to compete with many other forms of entertainment—which can often be cheaper than books. Lasso, in a video interview with fellow Peruvian Henry Spencer, explains that the market for pirated books is sprawling. This, coupled with low numbers of bookstores in many countries across the world, has led publishers to think creatively about their business plans. Estruendomudo has coupled its publishing projects with services they offer on their website, which include editorial and book design work completed for other institutions. Like a catalog of fashion designers for a firm that exports clothing, and special editions of César Vallejo books for the company Petróleos Perú.

Despite the difficulties, Estruendomudo has grown exponentially from that poetry journal published from a living room in Lima. Álvaro Lasso connected with fellow publishers, was responsive to the cultural situations of his country, and was constantly open to change. So much so that they now have offices in Chile and Peru. All of these pieces working together consolidated Estruendomudo as one of the strongest independent publishers of Latin America.