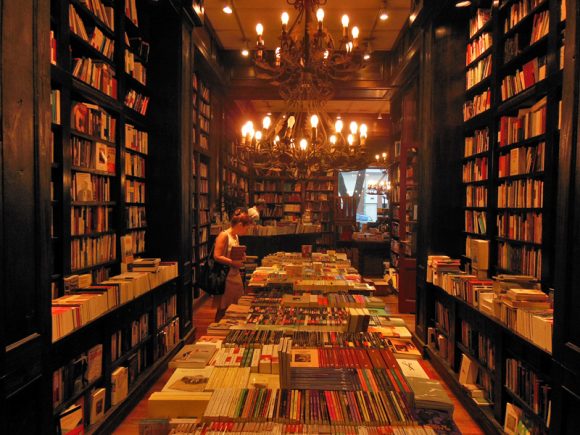 Argentina has long been known in Latin America for its rich literary background. Home of authors like Borges and Alejandra Pizarnik, it is almost expected of the country to provide ample spaces where words can flourish. For more than ten years, Eterna Cadencia—a bookstore and publishing house in Buenos Aires, the capital of Argentina—has been one of these places, setting a high bar for independent publishing across the continent. The bookstore came first, a project of Pablo Braun who in 2005 set up shop in a renovated house in the middle of the Palermo neighborhood. Long and comfortable, it is the kind of place where readers can leisurely browse the stacks. Later, in 2008 Pablo Braun joined forces with Leonora Djament to launch the publishing arm of Eterna Cadencia. Their publishing house is known for its robust catalog rich in literary theory and fiction. Now, while separate entities of the same brand, the bookstore serves as a laboratory of sorts to test how buyers and readers react to new titles launched by the publishing house, as Leonora explained in an interview for the Miguel de Cervantes Digital Library website.

Leonora Djament has been working since 1996 in the publishing world in Argentina, first in Alfaguara and then in Norma. She is the kind of editor who approaches projects with structure and passion, and she dislikes the kind of publishing catalogs that are built around the particular tastes of the editors. Books, she believes, are to be chosen by how they will influence the world around them and not just because the editor would enjoy reading it. To this day, Leonora has become an icon in the Spanish-speaking publishing world; in 2015 she won the Editor of the Year award given out by Fundación El Libro, an Argentinian nonprofit that promotes reading habits and organizes the country’s international book fair. In the same interview for the Miguel de Cervantes Digital Library, she talks about her previous trajectory and how it influenced the way she approached her role as Editorial Director of Eterna Cadencia: “It allowed me to integrate everything I learned from large publishing groups with a way to think about what is called Independent Publishing.”

Eterna Cadencia has, roughly speaking, only two editorial lines: literary fiction and nonfiction. Although it may seem as if the limits around the catalog are too broad, what guides all of Leonora Djament’s decisions is her firmly-held belief that a good editor “creates conversations with their time and space through their titles.” That is why they publish local authors as well as translations from all around the world; they publish known classics by Juan Rulfo and new voices like Federico Falco. Sometimes they receive manuscripts and others are recommendations from friends and agents who know the kind of voice and themes and conversations that interest Eterna Cadencia. “The role of publishing houses is to spotlight certain conversations, certain words, help name new problems or old problems that appear in a new form” she continues explaining in the interview. And every book under the umbrella of Eterna Cadencia is one more piece of this larger conversation.

While publishing is considered somewhat of a fragile industry, any new player—Amazon, piracy, new technologies, the lack of help from the state—can deeply affect it, it is the role of independent publishers to provide spaces to discuss the issues. As an example of this, Leonora talks about the importance of book fairs. An article in the Argentine newspaper El Clarin mentions how one of the biggest struggles of independent publishing is distribution. In response to this, publishers and booksellers across Latin America have pushed the creation of fairs and book shows—in Argentina itself Pablo Braun is the director of the International Festival of Literature in Buenos Aires (FILBA). In these spaces, independent editors and booksellers can meet to refresh and broaden channels of communication between countries.

Another beneficial side effect of these fairs, as Leonora Djament mentions in her interview for the Miguel de Cervantes digital library, is the opportunity to speak of and discover authors from neighboring countries. Part of the idea behind Eterna Cadencia is to strengthen the ties of the Spanish language and its writing, by publishing authors with powerful voices in a way that will make readers more curious about what is being written across borders.

Voice and narrative style more than plot, mentions Leonora, is what Eterna Cadencia looks for in their books. And their readers have learned they can find rich voices in their catalog. In an interview for the blog Culto, Leonora makes even more clear her ubiquitous pursuit of publishing strong voices regardless of the genre when she lists the forthcoming books in 2017 for Eterna Cadencia: the Bolivian Liliana Colanzi, a new translation by Alan Pauls of Roland Barthes by Roland Barthes, Suicide by the French Édouard Levé, and a collection of letters between Scholem and Adorno. Theory and critique alongside classic literature and fresh voices, but always in pursuit of unequivocally good writing.

As Leonora herself mentions, the publishing industry is a fragile environment. It is easily disrupted by new players if the people involved have not been paying proper attention. While some people might consider the creation of a publishing house something scary or downright foolish, Djament shows that it does not necessarily need to be that way. Djament’s leadership of Eterna Cadencia is fueled by a fiercely smart mind for books that also thinks about, and respects, the strategies needed to manage a business. A publishing house like Eterna Cadencia serves as proof that independent publishing can be interesting and profitable.