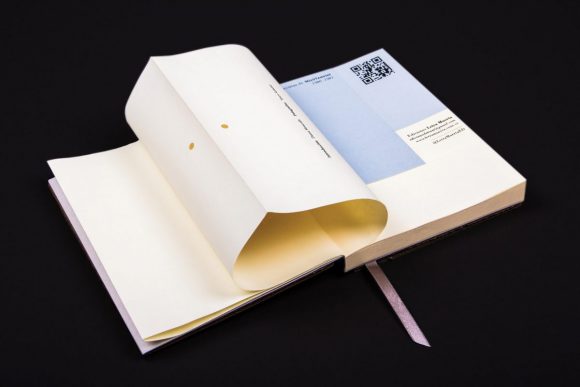 The fight between digital and printed books is less a real rivalry and more of a taunting between siblings. Many independent publishing houses in Latin America know this and have placed their bets and efforts in creating beautiful tangible books that satisfy tactile desires but pay equally detailed attention in publishing content that would be considered interesting regardless the format. Like Tragaluz or Cardumen in Colombia, Letra Muerta from Venezuela chooses to invest their time in the creation of objects that hold precious and important words in exuberantly beautiful books.

Letra Muerta started with Faride Mereb and Deisa Tremarias and now counts half a dozen people in their team. Faride, who is a graphic designer with a special affinity for poetry, joined the literature scholar Deisa in 2014 to create their own publishing project. Both of them had been working within the Venezuelan publishing industry for a while but in 2014, as Faride tells in an interview for the blog Digo.Palabra.text, they decided they had their own ideas regarding how publishing should be done and “instead of complaining and waiting for someone to believe in us, we decided to believe in ourselves.” Letra Muerta—dead letter in English—is a document or law that becomes stagnated and never comes to fruition. It is in this space that the publishing house moves: they publish books that have never been edited in Venezuela or that have been out of print for years but which Faride and the rest of the team believe are necessary for the landscape of Venezuelan literature.

Faride Mereb, the current managing editor of the project, has infused her love for archival research into the books Letra Muerta produces. In an interview for the blog Guayoyo en Letras she speaks of the time she spent as a library assistant and how this work of compiling research informed her love of books and graphic design. For Mereb, the high concepts behind the publishing house’s aesthetic represent the “material side of text and content.”

Their main focus, as with so many of the independent publishers in Latin America, is in reclaiming and rescuing local authors. Letra Muerta has chosen poetry as the main vehicle to do this. To this day, they have published only four books; it may sound like a measly number, but it’s quite impressive once you see what these books actually look like. Their first two titles are works of the Venezuelan poet and journalist Miyó Vestrini: Es una buena máquina, a collection of previously unpublished poems, and Al Filo, a compilation of Vestrini’s literary interviews. Both titles are limited editions with only 500 copies printed of each; Es una buena máquina comes in two volumes which were completely hand sewn and feature different bindings and papers, and Al Filo was a 2016 editorial Latin American Design Award winner for its innovative, archival folio-type design. Another of Letra Muerta’s most ambitious projects is their compilation of poems by the acclaimed essayist and poet Ida Gramcko. First published over 64 years ago in Mexico, this was the first time Gramcko’s work was being published in her native Venezuela. Each copy of the compilation comprised of a box containing multiple volumes, wherein different inks and paperweights mimick and retell the history of the development of poems themselves; only 250 copies of this extremely precious compilation were printed.

As I was looking at Letra Muerta’s books and talking about them with the friend who introduced me to them, the one thing I kept thinking was that these are extremely sexy books. Their whole composition is meant to engage tactile and olfactory senses as one reads through them. Ebooks don’t smell like printed books, and it is impossible to lose things within their pages, but ebooks also allow for a myriad interesting possibilities. They can store more and better illustrations, they can change and expand upon touch like David Wiesner’s Spot. Books like the ones Letra Muerta makes don’t need to compete with digital books because they are the analog version of “interactive.” In the same interview for Digo. Palabra.txt, Faride talks about the reason why she considers the physicality of these books so important: “Wasting paper and time in something with nothing backing it up isn’t worth it. And I don’t mean just words. There are plenty of books without words that are just as or more amazing (than ours). With this book, we’re definitely looking to create that symbiosis between content and object.”

And even though they are mainly known for the detailed work of their printed books, it doesn’t mean Letra Muerta has completely sidestepped the digital world. They use social media to keep their fans up to date on their projects, creating a space where they can have access and even some input into the editorial process itself. With Letra Muerta’s first project, Faride and the team made their social media followers aware of all changes, mistakes, and printing decisions. They also use their website as a blog where they regularly post essays on poetry, literature, and research. In a country like Venezuela where resources are so scarce and books like Letra Muerta’s are irrevocably seen as a luxury, it is necessary to cultivate and maintain a loyal audience through all channels available. As Faride puts it for Digo. Palabra.text: “We created our social media long before we were even certain we might print a book because we couldn’t run the risk of later on having a book without any channels through which we could share information about its process of publication.”

Letra Muerta, with their small print runs, small sizes, and short catalog has built an impressive reputation for themselves. By reclaiming Venezuelan authors like Ida Gramcko who otherwise might have never been published inside the country, and showcasing the relationship between the words and that which holds them, they have found a way to call attention to themselves in a time where so many other issues compete for people’s attention.