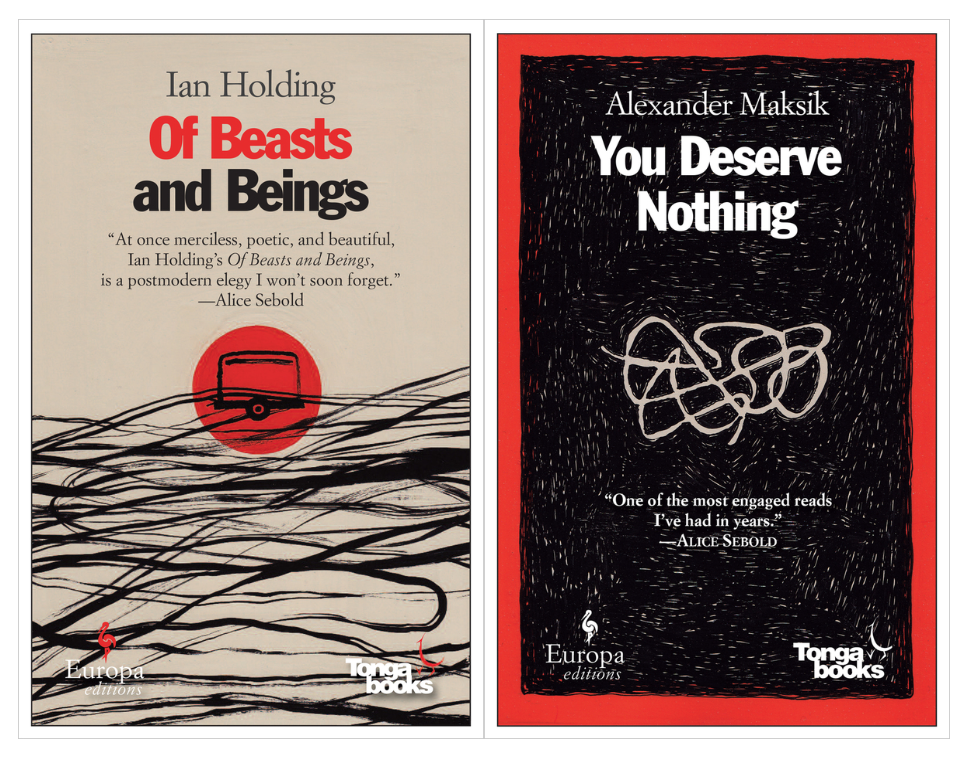 Tonga Books, a Europa Editions imprint, was founded in 2010. Titles published under Tonga are selected by prominent contemporary writers, and the first titles were chosen by Alice Sebold, best-selling author of The Lovely Bones, Lucky, and The Almost Moon. Tonga’s inaugural titles, Alexander Maksik’s You Deserve Nothing and Ian Holding’s Of Beasts and Beings, are raking in the praise, and the authors have nothing but kind words for Tonga. Maksik says there’s “the sense that the whole company is entirely behind the book, that we’re all in it together” and describes Sebold as “an extraordinary editor…Just before I turned in the final manuscript, I tried to soften the book. I wanted to make the ending neater and Will more likeable. I think I made those changes out of fear. She fought me though and won…[Sebold] refused to let me make it something else…I always felt that that’s what she was doing—insisting the book be what I’d intended from the start.” Holding, a native of Zimbabwe, sees Tonga as a publisher ready to take risks: “I come from a country (and indeed a continent) where the reality is that often blood and violence are a part of existence, regrettable as that is. I was therefore very happy to be paired with a publisher willing to take on such material and publish it in an uncompromising way and to give me a platform where my own authentic voice as a writer from these parts can be taken to a new audience in America and beyond.” Alice Sebold was nice enough to answer some questions about Tonga, so read on to find out how the imprint got its name, what it means for fiction to seek to understand the world, and what kind of machine perhaps only Margaret Atwood could design.

Laura: What was the impetus for starting Tonga?  How did you become involved?

Alice Sebold: It was, once again, the visionary zeal of Sandro and Sandra Ferri, also their wildness! They asked me during a visit to San Francisco where I live. We named it Tonga after the Tonga Room, a sort of faded 1950s bar in the basement of the Fairmont Hotel where they were staying. I first met the two of them as well as Karin Wessel, who worked with me on Tonga and who I loved at first sight, when I flew to Rome in 2003 to tour for The Lovely Bones. Sandro and Sandra have published all three of my books in Italy. We became fast friends.

Laura: Tonga is “unafraid of darker material, uninterested in cleverness for the sake of cleverness, and passionate about depth of character.” In addition, Tonga “…hopes to cultivate the sort of cutting edge voices that often go overlooked by larger publishing houses.”  How was the Tonga sensibility shaped? Was there a particular gap in the literary marketplace that Tonga wanted to fill?

AS: I would say that I had the same taste and desires as Sandro and Sandra. They also gave me free reign. In some sense this was a whim between friends that has resulted in establishing an imprint. They gave me total freedom to choose the books. When I began reading for Tonga so many books were being rejected at major houses on the grounds that the main character was too difficult or too unsympathetic. For me, it is the difficult characters that I’m most interested in.

Laura: Tonga saw its first book, Alexander Maksik’s You Deserve Nothing, published this August, with its second, Ian Holding’s Of Beasts and Beings, due out this November. How did these novels find their way to Tonga? What made them stand out?

AS: Maksik’s novel was submitted through his agent in the standard manner. Holding, who had been respectably published in the UK, had failed to get his due in the U.S. His UK agent, Bruce Hunter, contacted me through my own literary agent and got the book to me that way. He truly believed in Ian and knowing he was coming to retirement, I think he wanted to do all he could for Of Beasts and Beings.

Both of the novels grabbed me immediately. The force of their writing and a sort of relentless drive to understand. When I say understand I mean to understand the world. Neither of these novels is shy in its larger purpose. Both these novelists struggle with the world and their characters grapple with it in ways I found very honest and compelling. The characters are human and broken and occupy corrupt worlds where they must question their own level of complicity in this corruption. As a reader, that sort of struggle is like honey to me. I don’t think it needs mentioning that I also found their styles unique and amazing.

Laura: What’s next for Tonga?

AS: Tonga is a beast that will remain strange and untamed. I speak for all of us. I’m not as involved as I was—the burden of reading does get overwhelming and I am a believer in line-editing when needed—but hope always to be of assistance to the Tonga beast. I believe another author will soon take over my duties but I am not at liberty to say. I drift behind the veil.

AS: I love Melville House and Tin House but perhaps the publisher I’m completely smitten by is Persephone out of the UK. They publish their Persephone Classics line here but the UK line of books is more fullsome. They all have silver covers and French flaps as well as bookmarks which match the individual endpaper designs which have been chosen from materials or wallpapers of the period when the book was written. They specialize in out of print and forgotten books largely by women. Some fall under period entertainment but the majority are truly muscular and feminist work that has been overlooked for no good reason. Nicola Beauman is on a mission which is the truth of all committed small publishers.

AS: A sort of machine—I’m sure Margaret Atwood could design this!—that allows four or five other people to have your reading sensibility. That’s the only way to choose a book you want to edit and go all out for, is to have the time to read all the manuscripts that are submitted. Tonga was just me alone and as much as I’d love to do this forever (and I would, truly) I had to choose my own work first. That’s where the next writer who has lucked out in the world and can give back comes in! The ability to choose something raw and support it all the way to the end is a gift Sandro and Sandra gave me. I’ve only met one of the authors I chose (after the fact, ahem ahem) and that’s another thing I loved—that in the end, it was all about the words on the page and whether they sang.