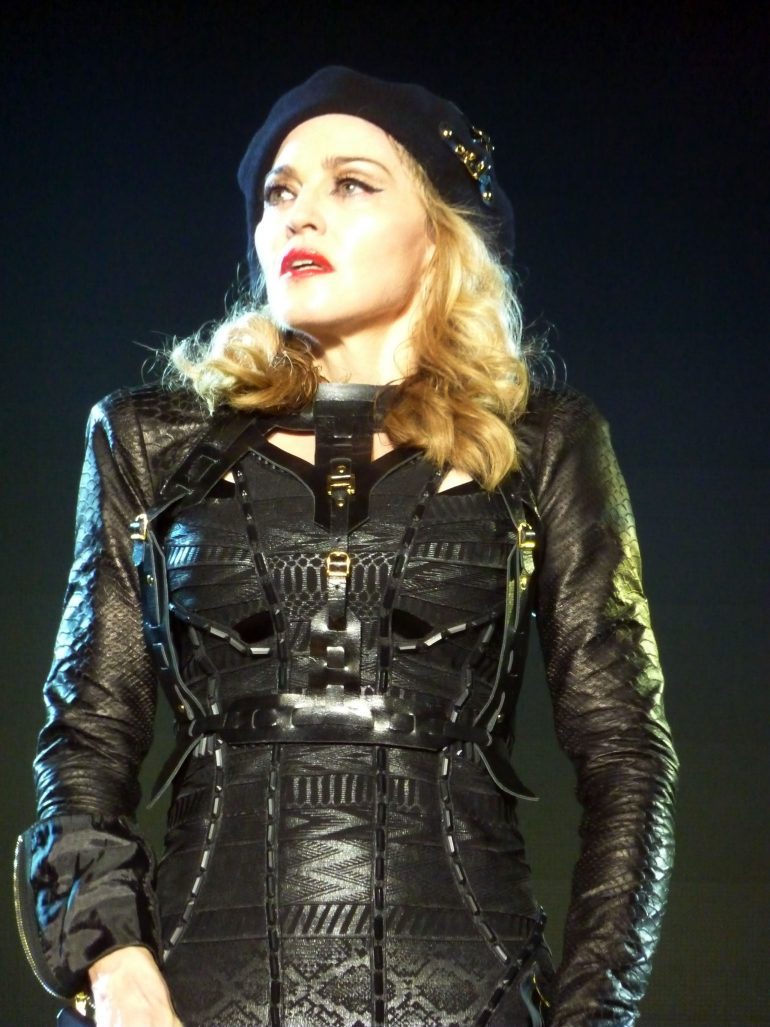 It’s not novel for celebrities to dip their toes into humanitarian waters. Actor Danny Kaye was named the first UNICEF ambassador-at-large in 1954, a full two decades before Angelina Jolie was even born.

The trope of the well-meaning but clueless celebrity do-gooder is so entrenched that it’s become easy prey for satire. Sacha Baron Cohen’s 2009 comedy Brüno, for instance, skewered both Live Aid-style sanctimony and the bizarre, fascinating world of PR consultants who advise celebrities on which good causes to support. There’s no shortage of information on this world. Handily, the website Look to the Stars catalogues celebrities’ charitable activities, products, and favored organizations.

One recent take on this phenomenon is Zadie Smith’s latest novel Swing Time, which Ploughshares previously assessed as a welcome step forward for Smith. Most of the coverage of Swing Time has focused on its revisiting of familiar Smithian themes (such as the intersections of race, gender, and friendship) or its departures from Smith’s past style (the novel, which is largely narrated by an unnamed woman, is her first to be told in the first person).

But one aspect of Swing Time that deserves more attention is its treatment of how celebrity involvement in international development has become just another element of a star’s brand.

The characters include a Madonna-like pop star building a school in rural Gambia, a star-struck aid agency advisor who joins her entourage to point out “areas of particular deprivation,” and two socially challenged academic types who used to work for Oxfam. Much of the dark humor in Swing Time comes from the tensions among these worlds, and particularly its not-very-generous portrait of Aimee, the singer whose wealth and need for praise are much greater than her attention span.

A key insight into celebrity humanitarianism from Swing Time is the risk of believing in emotions over evidence. The narrator reflects:

But I knew Aimee herself had no abstract interest in power. She was motivated by something else: impatience. . . . She hated meetings and long discussions, disliked considering an issue from too many angles. Nothing bored her more than ‘on the one hand this’ and ‘on the other hand that.’ She put her faith instead in the power of her own decisions, and these she made with her ‘heart.’

Aimee’s trust in gut feelings over expertise is paralleled by the confidence of many actors and singers that the strength of their feelings, if applied with enough warmth and explained to enough people, counts for more than the hard, unglamorous activities of both local community members and development experts.

Aimee’s impulsiveness and foregrounding of emotions also mean that her perspective suffers from short-termism. But progress in poverty reduction happens on a longer scale than the news and promotional cycles demanded of modern entertainment. Aimee is a product of this “I want it now” world, which challenges attempts to create actual change. And her entourage is keenly aware that “the wavering nature of Aimee’s attention” is the biggest challenge when it comes to their activities in Gambia.

Swing Time also amply demonstrates the dangers of ignoring politics and power relations. Smith’s sharp eye is put to especially good use when describing how Aimee, Madonna-like, feels that the rules of a low-income nation don’t apply to her, an international celebrity. (Aimee’s personal wealth outstrips Gambia’s GDP, which feels like an exaggeration; the country’s GDP is over $900 million, while Madonna’s fortune is estimated at $560 million.) In Smith’s narration of one idealist’s perspective, this leads to governmental neglect, or even worse:

He noted the growing resentment of the boys, who had been left to fester in the old school, which–though Aimee sporadically rained a little money on it–was now little more than a ghost town, in which children sat around waiting for teachers unpaid for so long they’d stopped coming to work. The government seemed to have withdrawn from the village generally . . . it was hard to avoid the suspicion that the village was being punished for its connection with Aimee, or deliberately neglected in the expectation that Aimee’s money would flow into the gap.

Aimee is blithely oblivious not only to the political ramifications of her largesse, but also to resentments caused by favoring one group over another. Her seemingly random selection of one village to receive aid creates unsurprising envy in the surrounding communities. This problem isn’t limited to undereducated pop stars, of course. Colonial history, along with some well-meaning contemporary aid projects, is littered with stories of privileging and building alliances with a particular local group. Perhaps the most tragic example of this is the 1990s Rwandan genocide, where the inter-ethnic tensions fanned by Belgian colonizers came to a brutal culmination.

However, the picture isn’t all bleak. It’s worth quoting from one moving passage that describes the successful development work in the Gambian village, which is less dazzling than Aimee imagined, but ultimately more durable. Ultimately, this passage suggests, a celebrity’s money and energy can achieve some good, “despite Aimee’s interference, and by working, in a sense, around her.” For instance, parents advise inviting religious teachers to the new school, which–together with the school garden–keeps community members invested in the school. And a school garden lasts longer in the village than donated laptops.

All in all the Illuminated Academy for Girls was not that shining, radically new, unprecedented incubator-of-the-future I had heard so much about around Aimee’s dinner tables in New York and London. It was the ‘Loomy Academy’, as people called it every day, which were then argued over and debated at the end of each week, in the village meetings, which led to further adaptations and changes, few of which I sensed Aimee ever knew or heard about. . . . It was a functioning school, built by Aimee’s money but not contained by it.