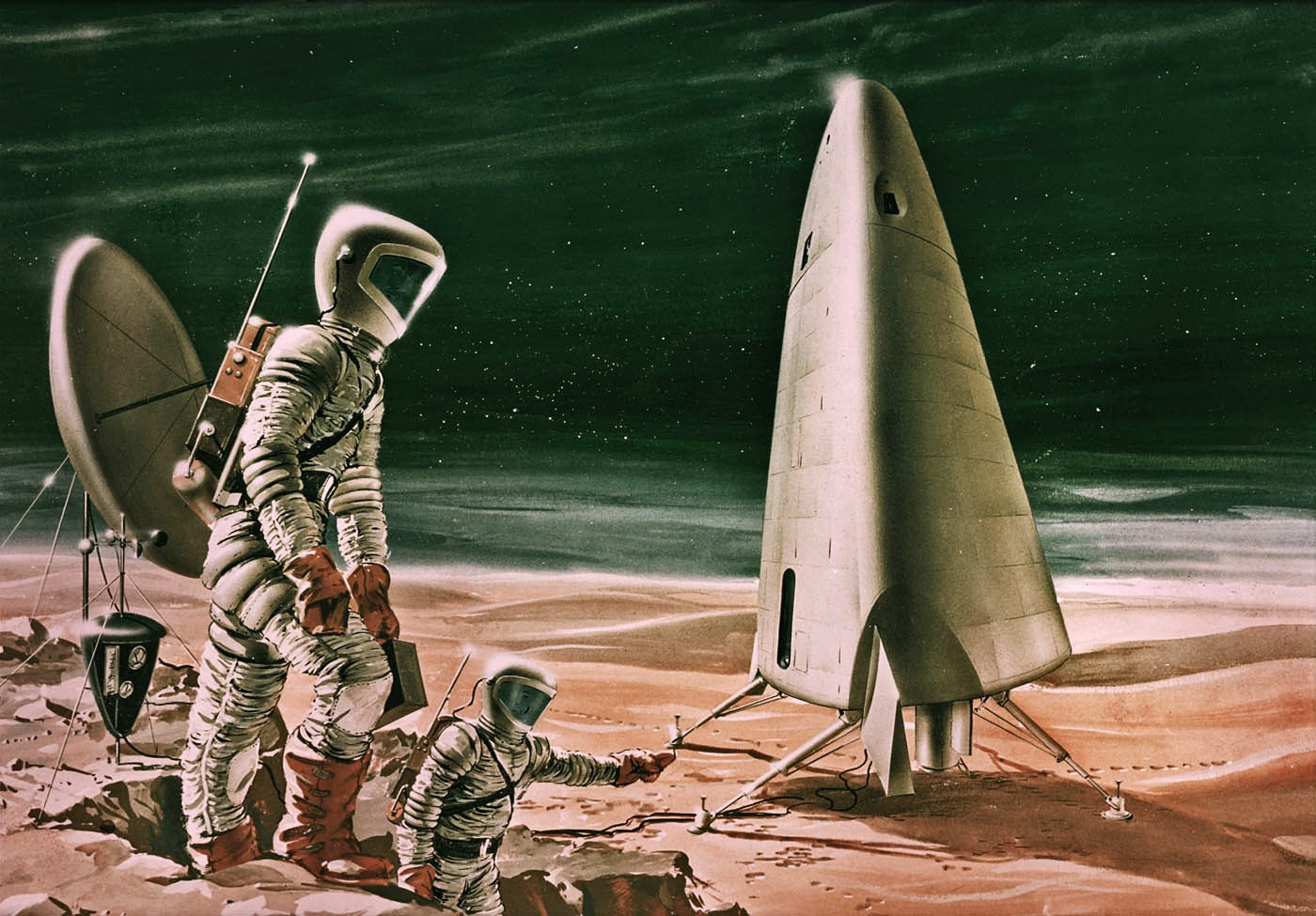 Emerging in the late 1970s and already diminishing by the early 1980s, Martianism was a short-lived yet influential movement in British poetry. Principally associated with Craig Raine and Christopher Reid*, it derived its name from the title poem of Raine’s second collection, A Martian Sends a Postcard Home (1979), in which the eponymous alien recounts Earth with whimsical disorientation. To the baffled narrator, mist renders the landscape like “engravings under tissue paper,” while “rain is when the Earth is television.” The telephone in turn is a “haunted apparatus,” a ghost one can “soothe to sleep with sounds.” Martianism is characterized by this playful blend of metaphor and misapprehension, employed to bring the familiar into sharp relief. In this respect, the movement’s name can be misleading: rather than contemplating a sci-fi future, the poems address domestic themes such as childhood, family, economic hardship, and war. Yet in describing the quotidian through unfamiliar eyes, they cast both light and levity on human experience, imbuing the ordinary with an otherworldly air.

By invoking wonder from the commonplace, Martianism deliberately contrasted the preceding school of British poetry, a loose association of writers known as “The Movement.” Represented most prominently by Phillip Larkin, Movement poetry is marked by the pragmatism and desolation of a postwar world. Its most salient features include formally disciplined verse, irony, understatement, stark realism, and a stringently antimodernist stance. In adopting this tone, the Movement writers sought to restore poetry to what they perceived as a more dignified form. Yet by the 1970s, British poetry was drawing negative comparisons to its counterparts in America and Ireland, being variously described as timid, unambitious, parochial, and lacking in experimental vigor. One reviewer conceded that while Larkin was unequalled in his familiar territory of the English lyric, the form itself was “drastically and poignantly limited in its sense of any life beyond, before or after, life today in England.” And to be sure, solitude, loss, and oblivion are recurrent themes in Larkin’s resonant albeit unsparing work. From his poem “High Windows” (1974):

“The sun-comprehending glass,
and beyond it, the deep blue air, that shows
Nothing, and is nowhere, and is endless.”

Martianism rejected this austere interpretation of both life beyond and lived reality, drawing instead on the traditions of surrealism and Anglo-Saxon riddles to approach the unknown as an invitation for possibility. Begins Reid in his aptly-titled “A Holiday from Strict Reality” (1978): “Here we are at the bay / of intoxicating discoveries.” As John Kerrigan proclaimed in the 1981 London Book Review: “Here is the real Martian credo: an optimistic emphasis on the richness of life made possible by the inventive reading of signs. Against the doleful resignation, the narrowed horizons, that one found in Larkin’s work, and in much of post-Movement poetry, Martianism maintained an almost naive spirit of enthusiasm.”

That Martianism marked a shift in British poetry was undeniable, yet not all reviewers considered the trajectory positive. Some struggled to find the distortion credible, noting that the defamiliarized “Martian” perspective was nevertheless conversant in human concepts—akin to being ignorant of the ocean, yet still able to describe water as a “dark expanse of linen,” or a rose with a “shark-infested stem.” Others found the nature of the work too shallow, the strange similes and occasional rhyming stanzas a tactic to avoid true feeling. Certainly, some of the Martian poems are reminiscent of the nonsense lyrics associated with Lewis Carroll and Edward Lear. Yet I would argue the majority contain profound emotion—the delight in language and visual imagery achieved alongside inner depth, at times with rueful honesty. On this point Ted Hughes expressed a similar opinion, writing to Raine of the Martian poems: “That double exposure of comic and seriously horrible is very real.”

Yet perhaps Martianism’s greatest impact comes from its very premise—an exercise in imagination in which the gaze of an unknowing “other” inspires valuable reflection on ourselves. Thus the Martian approach raises two enduring questions, each existing in close association: Are we alone? / Who are we? With the possibility of connection arrives the question of what will be conveyed—of what we might together stand for on our one shared home. The effect recalls a passage from Amy Hempel’s Tumble Home:

“There is an unidentified object that flies. When any one of us spots it hovering above the house, we all grab a book and run to the lawn and hold up the books to show them what kind of people we are.
Shakespeare and Tolstoy!
Run get Jane Austen!”

The postcard-poem that Raine’s Martian writes as a report on Earth begins here, with books, and the intensity of feeling they inspire:

“Caxtons are mechanical birds with many wings
and some are treasured for their markings—
they cause the eyes to melt
or the body to shriek without pain.”

** The poem ends as well in the act of reading, telling of how,

“At night, when all the colors die,
humans] hide in pairs
and read about themselves—
in colour, with their eyelids shut.”

We tell stories to preserve experiences as well as dream up new ones, which is precisely what Martianism seemed to prove. The harsher, more humbling aspects of existence were no doubt as apparent to the Martian poets as they were to the Movement writers. Yet without dismissing these realities, Martianism also located earthly elements that possessed glimmers of, if not hope, then at least surprise and strange beauty—an open pack of cigarettes becoming a miniature organ, an overturned beetle struggling “like an orchestra with Beethoven.” Embracing word play and imaginative freedom, the Martian poets moved away from previous narratives, insisting that we might yet define ourselves by something different.

It is with something like Martian school spirit that Tracy K. Smith asks in Life on Mars (2011):

“And what would we do, you and I, if we could know for sure
That someone was there squinting through the dust,
Saying nothing is lost, that everything lives on…?”

The poem is titled “Don’t You Wonder Sometimes?” and in this suggests we might all do so more often. Are we alone? / Who are we? These great questions send some to the edges of the solar system, seeking meaning in cosmic flares punched through the pure black of space. For others, answers are best sought among that most human thing: language, which is to say stories, books, poems. In these, too, a universe—worlds to be remade or yet discovered, dark marks awaiting constellation on the bright possibility of a page.

* According to The Oxford Companion to Modern Poetry in English, seven collections constitute the core of Martian poetry: Craig Raine’s The Onion, Memory (1978), A Martian Sends a Post Card Home (1979), A Free Translation (1981), and Rich (1984); Christopher Reid’s Arcadia (1979) and Pea Soup (1982); and David Sweetman’s Looking into the Deep End (1981). The movement is also associated with Martian Amis, whose name, coincidentally, is an anagram of Martianism. As editor of New Statesman, Amis was an early promoter of Raine and Reid’s work. He later expanded Martian misrecognition to fiction through his own novel, Other People: A Mystery Story (1981), in which the protagonist suffers from amnesia.

**The use of the word “Caxtons” is a reference to William Caxton, who introduced the printing press to England.