Home
»
Uncategorized
»
Interview with Chad Simpson, Author of Tell Everyone I said Hi 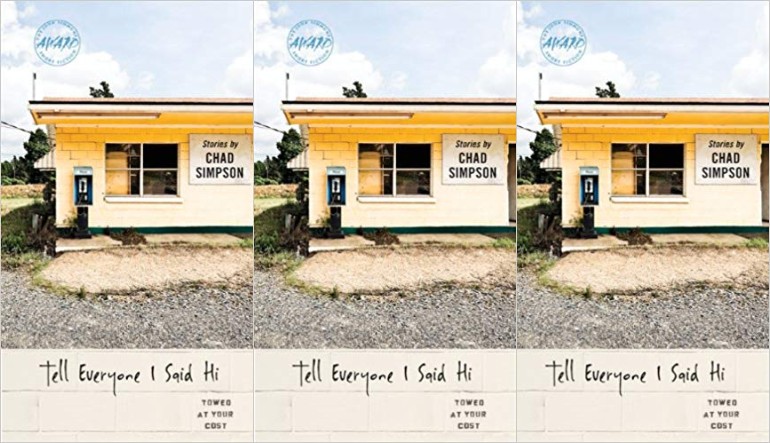 Chad Simpson was raised in Monmouth, Illinois, and Logansport, Indiana. His work has appeared in McSweeney’s Quarterly, Esquire, American Short Fiction, The Sun, and many other print and online publications. He is the recipient of a fellowship in prose from the Illinois Arts Council and scholarships from the Bread Loaf and Sewanee Writers’ conferences. He teaches at Knox College in Galesburg, Illinois, where he received the Philip Green Wright/Lombard College Prize for Distinguished Teaching in 2010.

Jennifer De Leon: Congratulations on the publication of your short story collection, Tell Everyone I Said Hi (Iowa Press, 2012). Can you share the genesis of this collection? At what point did you realize you had a book?

Chad Simpson: I began writing “Peloma,” the oldest story in the collection, in the fall of 2002, just after I began my first semester of grad school. About six years later, I sent a completed collection to the agent I was working with at the time. That book, however, was very different from the one Jim Shepard chose as the winner of the John Simmons Short Fiction Award. The book my agent shopped around from 2008-2009 was longer and contained mostly long stories. There were some close calls at some great publishing houses, but after nothing came through, I kept shaping the thing—taking some stories out, putting some new stories in—and eventually, in 2010-2011, I decided on eighteen stories, and that’s the book that now strangely, miraculously, exists in the world.

JDL: Many of the characters in Tell Everyone I Said Hi are injured, vulnerable, yet they are each graceful in their optimism. A beautiful teenage girl who becomes paralyzed in a car crash, a brother who repeatedly gets into bar fights, a twelve-year-old girl attempting suicide, all yield a heaviness that is lifted by refreshing prose like, “She smelled like White Rain hairspray and beer.” The language is minimalist at times and so full of meaning: “We weren’t high off the ground, but I could still see quite a ways.” In what ways do you feel style is in conversation with subject in your work?

CS: When I first began to take writing seriously, I was all about prose style. I was especially drawn to the work of William H. Gass, and the sentences I wrote at the time were usually lyrical and pretty but didn’t say a whole lot. A turning point came for me when I watched the documentary Down from the Mountain. I’d been a fan of Gillian Welch for a while before seeing the film, but I’d never actually seen what she looked like. In the film, when Gillian sings, she barely opens her mouth, but she still manages to emit these beautiful, sorrowful sounds. I began to use that as a kind of metaphor for my own writing. The idea was that in order to tell the stories I was trying to tell, I had to close my mouth just a little bit—to restrain some of that lyricism that I was wanting to let go of—in order to meet my characters and the situations they’re in where they needed to be met.

JDL: As for many writers, your book has been a labor of love. Since we met in 2007, and likely before that, you have been working diligently on this project. I admire your passion and persistence. How do you stay motivated on a project? On this particular collection?

CS: I tend to stay more motivated on individual stories and essays than on book-length projects. This is bad, I know, and hopefully I’ll change soon, considering I have three book-length projects in various stages of completion sitting around. With this book: I’ve realized after writing for about ten years now that most of what I have to say seems to be related to the themes that appear in this book: loneliness, helplessness, isolation/dislocation, a yearning to connect. This made it easy to stay motivated, in that when I was working on short stories, they all seemed to “fit” into this collection. I could probably cobble together from the castaway stories Tell Everyone I Said Hi (Again) right now if I wanted to.

JDL: How does Chad Simpson spend his Sundays?

CS: I used to spend my Sundays working on teaching stuff, especially when school’s in session. But the past couple years, I’ve been pretty good about keeping my Sundays free so that I can do laundry and clean the kitchen. Watch a movie or read a book. Maybe drive Jane around the back roads so she can take some photographs.

JDL: What are you working on now?

CS: I mentioned those three book-length projects above, and they shake out like this: 1) a young adult novel: I drafted this one a few years ago and am trying to figure out how to solve its various problems; 2) a novel-in-stories all told from the same first-person narrator’s point of view: it’s collagist, a-temporal, voice-y, and I’ve been having a lot of fun with it; 3) a crime novel: I’m in the very early stages with this, but I love crime novels and really want to write this book—I may have to set those other two projects aside so I can devote myself to this one.