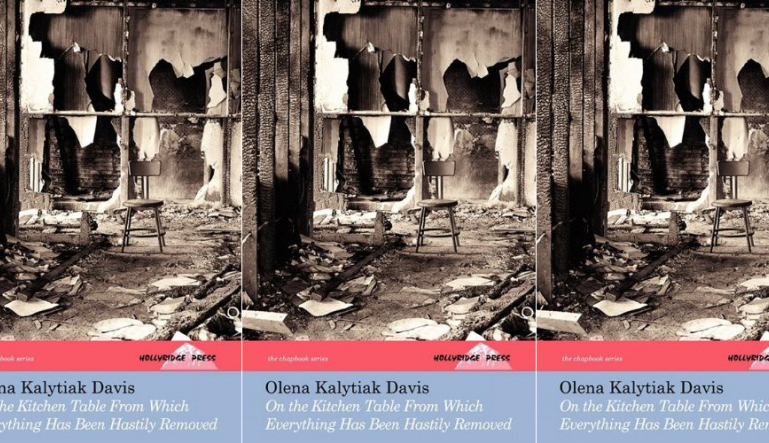 I don’t know how much needs to be said or written about Olena Kalytiak Davis: won the 1997 Brittingham Prize, lives in Alaska, post-confessional (blah blah blah), shattered sonnets from Tin House, Best American Poetry selection of “Six Apologies Lord,” etc. She also has some of the best music taste of anyone alive and is a lawyer, so you’ve really got a wide selection of traits to choose from, in terms of finding a reason (if you haven’t one already), to like her. Plus if you need further evidence, there’s her answers to the following:

Cutter: Everyone’s (I’m sure) question: when will you come out with more books?

Davis: You are very cute, Weston, and/but I think you might be the only one who cares. I just wrote a GREAT Supreme Court brief. Alaska, but, still.

Cutter: Explain to everybody, and maybe most of all me, why Nick Cave is so worth time and attention. I’m not saying he’s not, but he doesn’t boot me in the groin the way, say, Damien Jurado does. Help me. Give me better hands to hold this stuff.

Davis: He has that same quality.

Cutter: If you were writing in another genre, who would you like to write like and why? Who do you dig in fiction or non-fiction? Would you want to write like that? Do you presently want to?

Davis: I can easily live without poetry, but I absolutely cannot (cannot!) live without fiction. I’m a total recluse and/but need other lives going on beside/s mine. The only thing I imagine being better than actually RIGHT NOW being in the process of reading a 1200 page book (and I am presently re-reading War and Peace) would be writing a 1200 page book, totally being in that space for that long.  What is writing other than living? On the other hand, I am Barthes-like(?) (ha and whatever) in my aversion to the actual fictionalizing of stuff and never ever ever ever tell stories. I guess my book would have to be one gigantic divagation. That would be cool. On the other hand, I’m manically lazy. When I hear people/fiction writers talk about characters in their heads I am both very impressed and very suspicious. There is only one fucking character in my head.

Cutter: What’s a poem of yours which has been published, and it’s out and available, but which you’re still not 100% satisfied with? Why?

Davis: I think at some point an attempt coheres.  If it continues to do so that is a good and nice and made thing and I can stand behind it. It can be little; it can be unimportant. I cannot be changed into something big and important.  However, and for whatever reasons, I am the type that wants to go somewhere where no one has been before; in that sense, I think I am only satisfied with two of my poems.

Cutter: And okay, fine, the poetry question: what’s the first sexy or suckering phrase you read which made you point at the page (or whatever) and deep breathe-in and go, shit, that’s what I want to do? And, if you can: what was it about that line?

All the new thinking is about loss.
In this it resembles the old thinking.

I think I fell in love with the possibility/pacing of this kind of logic.

Cutter: On a different/other track: what’s a thing of yours you’re working on which you can’t seem to nail down? Is there some ‘problem’ you’re working at/toward, consciously, in hopes of solving?

Davis: I would love to write a real real poem and destroy it, totally erase all its traces and see what happens after that. i.e. finally come to terms with many important issues.

Cutter: I’d be real curious to hear you talk about reading your stuff–I’ve heard about your readings but I’ve never seen one, and we’ve talked at length about this shit before (better: I’ve talked stupidly about it but have never asked you). Poetry readings? Fun and good or not?

Davis: Reading is a form of higher stakes living.  Like writing, I think it can be an opportunity to go somewhere else and get something. But to purely inhabit a reading is a very hard and tricky thing. I HATE the showman in me.  I really am not interested in ever reading again.

Cutter: How did you get your son to read Moby Dick before he was thirteen?

Davis: He was ten! I had nothing to do with it except that I had a copy in the house. I think he saw a reference to it in BONE. He was interested in the SUBJECT MATTER. He said that allowed him to suspend during paragraphs and times of unknowing. He wrote a very straight (funnily to me) and coherent synopsis for his book report. (And I thought I was cool doing A Catcher in the Rye report in fifth grade.)

Cutter: I don’t even know how to ask this, and it’s not a queston I even understand that well, but here: you’ve got, from what I can understand, a sort of reputation—this like wildwoman or something, I don’t know. Is this true? How does one get one? Is it because you took a picture of your ass for the poetry foundation blog? Why is it because, if there is a because?

Davis: HA! But maybe my ongoing unknowing and lack of agenda is seen as wildness.

This is Weston’s sixth post for Get Behind the Plough.