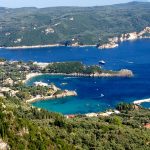 Somewhere between Downton Abbey, Little House on the Prairie, Arrested Development and The Swiss Family Robinson are The Durrells in Corfu. The six part series from Britain’s ITV begins airing as part of the PBS “Masterpiece” series on Sunday October 16.  The Durrells is based on the first book of classic semi-autobiographical trilogy “My Family and Other Animals,” by conservationist Gerald Durrell. The books and the series chronicle the unconventional Durrell family as they relocate from rainy, dreary England to the sunny, unspoiled island of Corfu in 1935.

Anyone who has ever dreamed of chucking it all and setting up home on a sunny island in the Mediterranean will be swept away by the lush scenery and wildlife that welcomes the family to Corfu. Widowed mom Louisa has been persuaded to move her bored and listless family there for a chance at happiness and familial harmony. The family includes her four children: Gerry, the youngest and an obsessive animal lover; Lawrence (called Larry), the oldest, a failed real estate agent and struggling writer; boy crazy Margo who is looking for love and adventure; and middle brother Leslie, once ruefully described by his mother as “a dolt with a gun.” Over the course of the series and the novel, Gerry will bring home animals, Leslie will randomly shoot things, Margo will paint and fall in and out of love while Larry embarks on a brilliant literary career that will span several continents and as many decades. And with all that going on, they each still find time to look for a suitable romantic partner for their reluctant mother.

In a slight departure from Gerald Durrell’s novels, the series shifts the focus to Louisa Durrell (played by Keeley Hawes) and aims for a more centered and grown-up approach by seeing the unruly family through a mother’s eyes. But fans of the books will not be disappointed. The perspective may have shifted but the heart and soul remain untouched.

When the series debuted on British television last year, critics were quick to point out that the sunny, bohemian lives the Durrells lived in their shabby-chic rundown villa is only part of the real Durrell story. The less than romantic details of life Chez Durrell may have been omitted (such as Louisa’s fondness for gin and champagne, which is only slightly alluded to) but they were also omitted from the source material. In Gerry’s trilogy and in Larry’s lyrical recollections of his life with first wife Nancy in Prospero’s Cell, the worlds they describe are sunny adventures with only a few dark moments, rather than a long, dark slog with only a few sunny moments.

There are some fans of  My Family and Other Animals who adore Durrell’s Corfu so much that they almost don’t want to visit themselves—they know the cars and the tourists and the fast food restaurants won’t be anything like the books where Gerry roams the island collecting dogs, bats, and bugs, Larry lounges in his bathrobe writing by the seashore, and Margo sunbathes all day beneath Greek ruins and clear blue skies. As Gerry describes it, it really does sound like a slice of heaven:

“Each day had a tranquility, a timelessness about it so that you wished it would never end. But then the dark skin of the night would peel off and there would be a fresh day waiting for us glossy and colorful as a child’s transfer and with the same tinge of unreality.”

Unreality is what the Durrells novels of this time and place are about.  At heart, the Durrells are a pair of sentimental and quirky British optimists who, thankfully for all of us, prefer to recall good times on a idyllic Greek island.

The books reveal that the very British Durrells are as interesting a menagerie as Gerry’s pet collection. Their unique personalities make the Durrells’ adventures sound more like the type of quirky sitcom modern readers would find on Netflix. In the way many families often do, after dinner chat around the dining room table sometimes centers on why everyone in the family is so hopelessly strange:

“It’s all your fault, Mother,’ said Larry austerely; ‘You shouldn’t have brought us up to be so selfish.’

‘I like that!’ exclaimed Mother. ‘I never did anything of the sort!’

‘Well, we didn’t get as selfish as this without some guidance,’ said Larry.”

Gerry has an ear for dialogue and a fondness for his family’s particular sort of English madcap approach to life that leaves readers wishing they, too, could be part of the clan. One story is piled upon another with wit and affection. Margo falls hopelessly in love with a handsome friend of Larry’s who doesn’t know she exists. Gerry has a pet pelican he keeps on a leash. Leslie shoots a neighbor’s turkey and winds up in jail. There is a cast of Greek characters, neighbors, fishermen, farmers, doctors, aristocrats and cooks who also populate the novels. They begin as quasi-caricatures and as the Durrells settle into Greek life on Corfu become more three-dimensional.

The Durrells in Corfu is as funny and lyrical as those who’ve read the books will expect.  The scenery is beautiful, the characters are the kind readers enjoy spending time with, and their escapades are fun and engaging. With any luck, the series will inspire a new generation of readers to rediscover the Durrell brothers’ accounts of a time and a place they both admit may or may not have really existed except on the printed page.