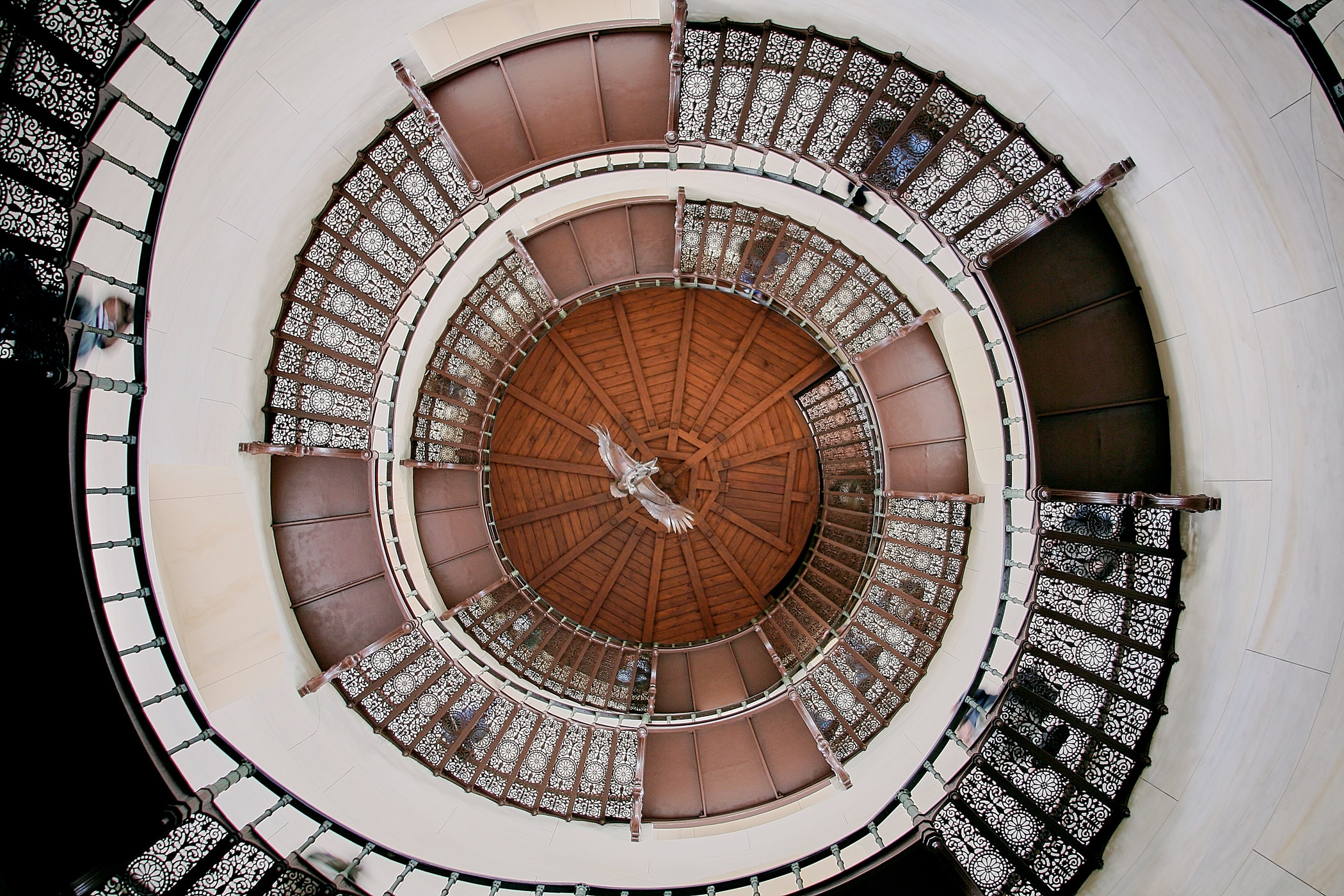 The first story I remember loving is Laura Ingalls Wilder’s Little House in the Big Woods. I followed the wagon that carries Laura and her family to new places, charting the narrative arc of the Little House books through the waves of calamities—inhospitable lands, prairie fires, scarlet fever, severe weather—and the sweet triumphs of surviving another day and holding the home together. I loved Laura’s stories so much that I quickly latched on to the plentiful Little House spinoffs that started with Laura’s great grandmother Martha in Scotland and ended with Laura’s daughter Rose in San Francisco. This expanded series depicts a sweeping portrait of manifest destiny that marches steadily from the old world to the very western edge of the new one linearly through time.

Linear narratives like the Little House books came to define my understanding of what a story should look like, though I don’t remember consciously thinking about form until I read Ander Monson’s essay “Outline Toward a Theory of the Mine Versus the Mind and the Harvard Outline” in his collection Neck Deep and Other Predicaments, which also contains an essay modeled on an index, among other surprising forms. Initially, I was shocked and frustrated by an essay that asked me to make sense of its content in a new way, an essay that forced me to stop and consider not just its content but its container and how the two interact. For Monson, form is essential, it’s what gives a narrative meaning and purpose and makes it worthwhile. I’ve come to realize that the most finely wrought narratives are those forged through an understanding of how form and content complement one another. Only then is a story’s truth, beauty, and grit exposed.

Jane Alison thoroughly examines form in her recently published book Meander, Spiral, Explode: Design and Pattern in Narrative. While she uses fiction for all but one example, her explanations and analysis are just as applicable to works of nonfiction. She begins by asking her readers to consider what form literally looks like on the page. “Memoirists know that they must ‘look’ back over life to find patterns that give order,” she writes. “We use visual and spatial terms so easily: look back.” In his Harvard Outline essay, Monson, too, dwells on the visual, describing the Harvard Outline’s visual expression as “scaffolding so white against the language.” Although in the content of the essay he derides the form itself, he bends it to his narrative will by using the white space to reflect his content. For example, writing about his family’s history of mining in Michigan, he describes going deep into a mine, all the while diagonally pushing the text down across the page so that there are fewer and fewer words per line.

Just as she urges us to consider the visual aspect of form, Alison also suggests examining “elementary particles, the visual, auditory, and temporal units with which we first design.” She describes these units as “the tribe of punctuation—and the spaces between marks” as well as “types of letters, lengths of words, friction or fluidity among them, repetition, pauses or liltings within our inner ear signaled by commas or question marks.” Form begins with the most essential parts of writing. Monson similarly urges attention to detail at the sentence level. “I want it to be art, meaning that I want it transformed, juxtaposed, collaged—worked on like metal sculpture, each sentence hammered, gleaming, honed,” he explains. “For me, the sentence is where it’s at—the way the story’s told—not simply the story behind the language.” Monson asserts that to be art, a story requires well-crafted sentences. Alison adds that “[s]uper-short paragraphs,” which she calls crots (prose stanzas), “and line breaks can aerate prose, throwing light into density, giving the reader space to think. They also create dynamism, letting the eye swing to the left more often, each swing shifting the thought.” In other words, a story is so much more than the words that it comprises, and form is more elemental than the overarching structure.

Only after writers consider these particles can they go on to consider how form might interact with the story they want to tell. While Alison isn’t dismissive of the arc, the narrative structure most commonly used, she pushes her readers to consider other, more complicated (and arguably more interesting) structures, using a variety of examples to explain what these structures look like. Of the arc she writes, “But something that swells and tautens until climax, then collapses? Bit masculo-sexual, no? So many other patterns run through nature, tracing other deep motions in life. Why not draw them, too?” Alison also notes that form should be purposeful. She identifies the necessity for “structures [to] create an inner sensation of traveling toward something and leave a sense of shape behind, so that the stories feel organized—not just slice-of-life.”

Monson and Alison both agree that form should function on the narrative, not just the aesthetic, level, and that form should not be a gimmick. Monson also indicates that attention to form may be necessary to make meaning out of a narrative that could easily be dismissed if told conventionally. He asserts that such nonfiction “might be made to matter if explored further, with style, an angle, some kind of action working as a countermeasure against the desire of the I to confess, to tell its stupid story.” But going too far in one’s innovation with form, Alison notes, may lead to a different kind of failure: “So often fictions that experiment formally do so at the expense of feeling. They toy on surfaces or are purely cerebral affairs, don’t explore human complexities.” Yiyun Li similarly cautions writers in her essay collection Dear Friend, From My Life I Write to You in Your Life. “A narrative catering to others is not far from memories revised for ourselves:,” she writes, “both move us away from the quicksand of feelings.” One must strike a delicate balance between form and content in order to transcend the personal and confessional without losing sight of a story’s feeling.

Unlike the primarily informational or organizational man-made forms Monson gravitates towards, Alison examines forms found in nature that stories might organically inhabit. She discusses waves, wavelets, meanders, spirals, radials or explosions, networks and cells, fractals, and tsunami? (question mark Alison’s). That one might be drawn to these natural patterns is not surprising. Eudora Welty writes in One Writer’s Beginnings, “The events in our lives happen in a sequence in time, but in their significance to ourselves they find their own order, a timetable not necessarily—perhaps not possibly—chronological. The time as we know it subjectively is often the chronology that stories and novels follow: it is the continuous thread of revelation.”

In her explanation of non-linear forms, Alison picks out this thread in various novels, short stories, and hybrid works, tracking the thread to discover the revelations when the narrative does not yield understanding as readily as a linear narrative would. As Welty gets at, organizing and writing about one’s memories often necessitates abandoning chronological form. Alison describes how in a fractal, “connections can be constellatory, with synaptic links forming among seemingly far-flung elements: lexical entries, bits of story, photos, stamps.” Familiar to many readers, this is the famous stream-of-consciousness style in some fashion or another. Alison’s description of fractals fits nicely with Li’s description of memory as “a collection of moments rearranged—recollected—to create a narrative. Moments, defined by a tangible space, are like sculptures and paintings. But moments are also individual notes of music; none will hold still forever. In the instant they are swept up in time[.]” This expression of memory might also lead to a narrative built of networks and cells, which asks the reader to “gaze upon many segments or a web. Instead of following a line of story, your brain draws the lines, makes connections.” To make connections, you have to ask, “What is the fundamental element?” The page and the narrative will both have “crots [that] are like islands in an archipelago, all sharing a theme and a recognizable, if unstable, viewpoint. The pieces offer hints of time, too.” A piece with networks and cells may be somewhat organized through numbered sections, or the crots may have “magnetic edges: the last few words of one form the opening words (more or less) of the next.”

The arc can only take narrative so far before it crashes, particularly when it comes to personal writing. Often, more is needed—especially when stories are so easily made public through the internet—to make narrative meaningful. Form and story, memory and form, work together to make something that matters not in an aesthetic way, not in a narrative way, but in a way that leads to the continuous thread of revelation.

Tags:Ander Monson, Dear Friend from My Life I Write to You in Your Life, Eudora Welty, Jane Alison, Meander Sprial Explode: Design and Pattern in Narrative, Neck Deep and Other Predicaments, One Writer's Beginnings, Yiyun Li