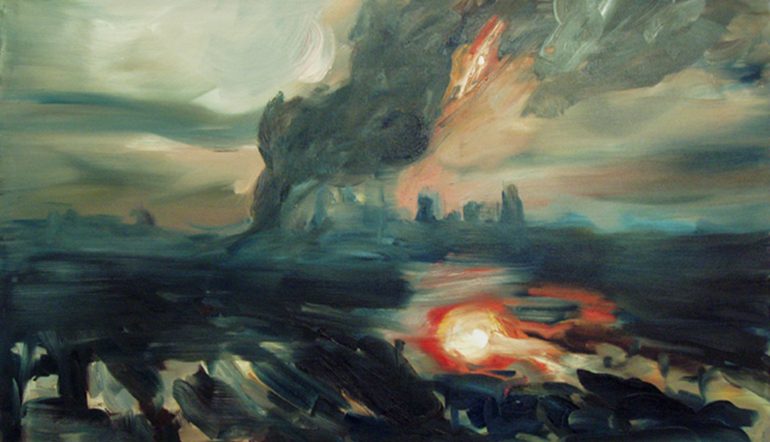 The aftermath of disaster is difficult to measure. The answer changes depending on your metric of loss: number of deaths, houses destroyed, families displaced, infrastructure in need of repair. Some measures go beyond numbers. You can’t graph grief, hope, trauma, or what it took to survive. But you can collect them in poetry, the way Jerika Marchan does in her debut collection, SWOLE

, an experimental, sprawling collage of poems drawn from her childhood experience of Hurricane Katrina. The scope of recovery from disaster is usually zoomed out, on the depersonalized plane of cities. Marchan’s eye is a roving one, taking in the whole stretch of New Orleans on an intimate level—its people, its music, its idiom, and its bloat.

The wreckage of the storm is a kind of language for Marchan. Lines show up again and again, repeating like the sure arrival of waves to the shore. “[ River, your kindly undulating mouth ],” the title of one of the poems, echoes faintly through the text, reappearing in variants: “// your undulating mouth //,” “// River, your undulating mouth //,” and so on. It’s an intimate addressal—the kind of thing you would say to a lover. Swole is full of love poems to New Orleans, and Marchan dwells in the fuzzy realm of dreamscapes and childhood memories. She also captures the city’s braggadocio and swagger, pulling from the raucous religiosity of the South, New Orleans jazz, and hip hop. Kanye’s iconic outburst during an NBC telethon makes a necessary appearance. In one poem she plays on the famous “Who dat?” chant of the New Orleans Saints, turning it into a refrain about consumption, repression, and disappearance: “who dat? / who dat? / say dey gon / eat me hole.”

Mondegreens are operative for Marchan, who includes misheard and repurposed rap lyrics throughout the collection. They appear in short bursts, the way you hear music blasting out of the rolled-down windows of cars driving by in cities. The ease with which a word can be misheard or misspelled becomes a purposeful technique of erosion in Swole. In one poem, “we tried” deteriorates into “[sic] we tired / [sic] we tread / [sic] we tire / [sic] we tided / [sic] we tide red,” until the poem returns to its original phrase. It’s a circular journey that can be read in the exhausted voice of New Orleans residents struggling to survive and as a sardonic critique of the empty rhetoric of a government that failed at every step, that didn’t really try.

Marchan is clear about the class and race lines that dictated that failure. “[T]he district is hurting again / mama says, cuz it can’t find its shoes / to walk to higher ground / where rich people live,” she writes, referring to the economic and geographic inequality of New Orleans, where the poorer neighborhoods are lowland. She references the 1991 eruption of Mount Pinatubo in the Philippines, where she was born (“When I was a month old a volcano exploded, and mama said the ash was so thick it coated my diapers black on the clothesline”), a natural disaster that, like Katrina, devastated the poorest residents of the area and had long-lasting economic and political effects in the region.

Disaster is always dispersed unequally. Marchan writes about the disparate threats posed on different bodies in cities and during the storm. For her, a brown Asian woman, to walk through the city is to be policed by men and to pass the ghosts of girls that came before:

This is Whiskey Bay where he
dumped the bike before he dumped
her body — a girl like me,
my own age — I make habit myself
follow the speed limit

The city is a map of possible danger and death. It is bloated, writes Marchan, recalling the images of coffins floating in the flooded streets of New Orleans, with “tired ghosts.” She’s bloated too—or brimming, rather, all over the strictures of girlhood: “if i said i was a vessel — a container, not for sailing / if i said i was a vesselgirl, not leakyfaucetgirl / so — drip / it’s not the same as carrying.” The body, the city, the levee—they all wrought their own special violence. They all have their limits. Marchan searches for a way to repair the loss: “why can’t I become a builder myself?” she asks. Swole, perhaps, is the reparative answer.