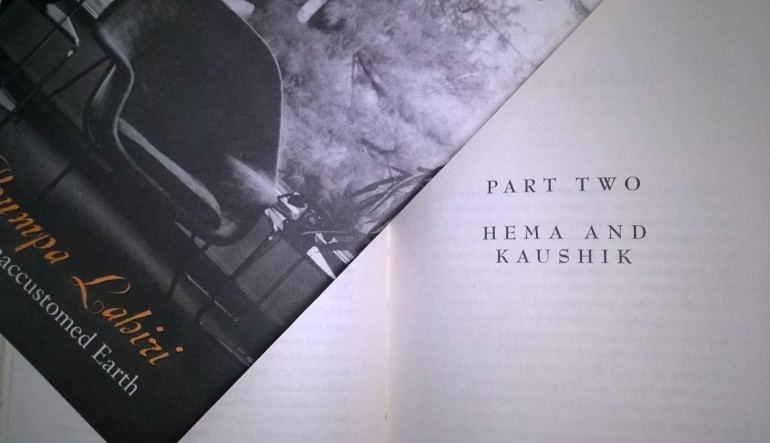 When I first read Pulitzer Prize winner Jhumpa Lahiri’s long short story “Hema and Kaushik,” I lived in suburban Mumbai, where I often sat in darkness by the window at night all by myself. In Koparkhairane, twenty-four miles from downtown Mumbai, power outages or planned cuts were common. It was on one of those nights, with my family in Kolkata, that I sat by candlelight reading a hardcover edition of Lahiri’s Unaccustomed Earth, her collection of short stories, published in 2008. “Hema and Kaushik,” one hundred ten pages long, is the last story in the book. The story has since haunted me every single time I have read it. At each reading, I have fought tears, unsuccessfully, marveling at the author’s storytelling prowess, sensitivity, lyrical language, and mastery of craft. Every time I have identified with Kaushik, one of the lead characters.

Lahiri is a consummate storyteller and wielder of language. The story, spanning decades and continents, is a master class in technique, too, centering on the theme of immigration and dislocation, with ill-fated love at its core. It has three parts: “Once in a Lifetime”; “Year’s End”; and “Going Ashore.” The story begins in Cambridge, Massachusetts, when Hema’s family throws a farewell party for Kaushik’s before they leave for India for good after spending several years in America. Kaushik’s family, however, returns after several months to the United States and stays as guests in Hema’s house for weeks before they buy their own house. It is during this sojourn that Hema first feels a crush toward the teenaged Kaushik, who pays little attention to her. It is also during this stay, while on a forbidden trip to the woods behind Hema’s house, that Kaushik reveals his mother’s incurable illness. The story, on one level, then becomes Kaushik’s struggle to cope with grief at his mother’s passing away and to accept his father’s new wife and family. The final chapter shows the blossoming of love between the two protagonists as they meet by chance in Italy. The plot is simple, but neat and satisfying, with Lahiri’s eye for detail and lyrical prose adding substance.

It is Lahiri’s Chekhovian style of adding depth to certain statements that I find most inspiring. Consider, for instance, the way the author describes Hema’s reaction to the news of Kaushik’s mother’s illness:

Perhaps you believed that I was crying for you, or for your mother, but I was not. I was too young, that day, to feel sorrow or sympathy. I felt only the enormous fear of having a dying woman in our home. I remembered standing beside your mother, both of us topless in the fitting room where I tried on my first bra, disturbed that I had been in such close proximity to her disease. I was furious that you had told me, and that you had not told me, feeling at once burdened and betrayed, hating you all over again.

The technique used in the story is instructive and innovative. The story, apart from being divided into three chapters like a novel, uses a combination of points of view. The first chapter is told from a first-person point of view by Hema as the narrator addressing Kaushik; the next told from a first-person point of view by Kaushik as the narrator addressing Hema; and the last chapter written in third person, with the ending section switching back to first-person by a grown-up Hema. In the first-person chapters and the ending, the tone is that of a second-person narrative because of the use of “you”–the effect is like that of a personal letter. I only wish the second chapter, “Year’s End,” continued the warm personal “you” tone. This chapter is mostly first-person, with “you” occurring only a few times. They seem unexpected and isolated–and a little jarring.

It is this chapter, however, that touches me emotionally the most, thanks to the author’s use of imagery and language, showing Kaushik’s heartbreaking visit to his home after his father’s remarriage.

In a sea-side scene at the end of the chapter, where he buries his departed mother’s photos,

The wind ripped and chewed through everything, and the water was a sheer drop down. I crossed paths with no one. For a long time I watched the approach and retreat of the waves, their thick caps crashing apart against the rocks, that eternally restless motion having an inversely calming effect on me. . . . But there were too many pictures, and after a few, I, like my father, could no longer bear their sight.

Lahiri is obviously a writer of great sensitivity. Her insight into human emotions is touching.

As writers, we are often touched and impressed by a story enough to crave writing such stories or to wish we wrote the masterpiece. Lahiri’s novella-length story is one such for me. She speaks to my immigrant experience. I have gone back and forth between America and India, and lived in America, making friends and forming abiding bonds. I remember wistfully the first time my father scraped together the money to put me on a British Airways flight to America in 1991. He has since gone where Kaushik’s mother has.

I don’t need to bookmark “Hema and Kaushik,” for those one hundred-odd pages in my book are indelibly imprinted with spilled molten wax from a red candle that I used to read the story in my Mumbai apartment. As budding writers, yearning to write stories on a theme close to our hearts and still struggling to get published, we look for models. Lahiri is the model for me.