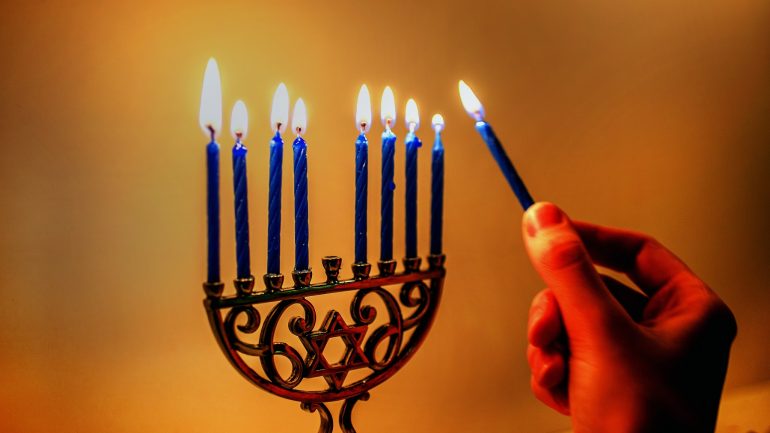 On the second night of Hanukkah, we had a few friends over at our apartment for a candle lighting and some traditional holiday treats. My husband and I are an odd combination when it comes to religious customs: he initiated the get-together, insisted on inviting only people who celebrated Hanukkah, and wanted to sing the songs. But if I didn’t say the blessing over the candles—to which he refrained from even answering with a sing-songy “Amen”—they would not have been spoken at all.

This was our son’s second Hanukkah, and watching his gaze transfixed on the candles, his thrill over the spinning dreidel, and his excitement over latkes brought into relief some of the questions we—his Israeli-born-and-raised parents—have been asking ourselves ever since he was born in the United States.

In New York City, raising a Jewish child seems like a no-brainer. Temples and kosher bakeries abound and everyone knows which holiday happens when. But the intricacies of a Jewish identity are myriad, and that’s where things get tricky. I am not at all religious, but I do have my own amorphous, hippy-dippy idea of God, which drives my atheist husband up the wall. But while I merely enjoy the holidays, he is adamant about them, overtaken with an utterly Jewish combination of enthusiasm and ennui.

Our experiences have left us thinking about what notion of Judaism we want to impart to our son. How does one raise a child to be culturally Jewish, to speak Hebrew and find meaning in the familial and ritualistic aspects of the holidays, without going to synagogue, fasting, or talking about Hashem? How can we explain to our son that he can be American but also Israeli? A proponent of Israel but an opponent of the occupation? Jewish but also a humanist? Liberal but also traditional? Yes, my husband and I want it both ways.

In Nathan Englander’s short story, What We Talk About When We Talk About Anne Frank, an emotional, pot-laden encounter between a secular Jewish-American couple and an expat Ultra-Orthodox Jerusalemite couple touches on the question of cultural Judaism. After arguing that the assimilation of American Jews is tantamount in its repercussions to a second Holocaust, the Ultra-Orthodox son of survivors says, “Judaism is a religion. And with religion comes ritual. Culture is nothing. Culture is some construction of the modern world […] it is ever-changing, and a weak way to bind generations.”

To his secular friends, this statement is offensive not only because of the historical comparison, but because it dismantles the heritage they have worked so hard to build, and insinuates that their teenage son will grow up to blend seamlessly into American (read, Christian) life. In a nutshell, he is telling them that whatever foundation of values and priorities they believe they have created is virtually worthless.

In Danit Brown’s short story, Ask for a Convertible, former-Israelis living in the Midwest rebuff temple service for more secular rituals—what have they got to prove, anyway?—while complaining about their children, who are off in another part of the country, celebrating Christmas with their non-Jewish partners.

The Israelis in both stories seem to be making a similar argument: if you live in Israel, or at least within a strong Israeli community, you’re golden. In Israel, being Jewish is the default. One can avoid the synagogue, gorge on pork and shrimp, and answer to no one. In Israel, our son would be raised Jewish no matter what—it just wouldn’t be a question. But if you are a Jew elsewhere, the onus is on you to find a way to live it.

Assuming there is a way to do that at all. Must we choose between raising our son religiously Jewish or foregoing the notion of a Jewish heritage all together? Is our own unique brand of faith a prescription for faithlessness in the generations to come? Does our cultural identity amount to anything at all?

I decide, in the end, that I am willing to give up a lot. I don’t think it would bother me if my son ended up with a non-Jewish partner. I don’t think I would care if he had no desire to ever live in Israel. I think I would even make my peace with him not being interested in the holidays. But I want him to have perfect Hebrew, and perfect English. I want him to feel like whichever one of the two countries he happens to be in, he fits right in—he belongs.

Even as I write this, I know it is too much to ask. The price I pay for the amazing gift of having two countries to call home, of being bilingual, of twice-yearly visits to Tel Aviv, is never being fully certain where I ought to be. “You always end up losing a part of yourself,” says the mother of Brown’s young heroine—an Israeli expat. “You just have to choose which part.”

This piece was originally published on January 4, 2018.