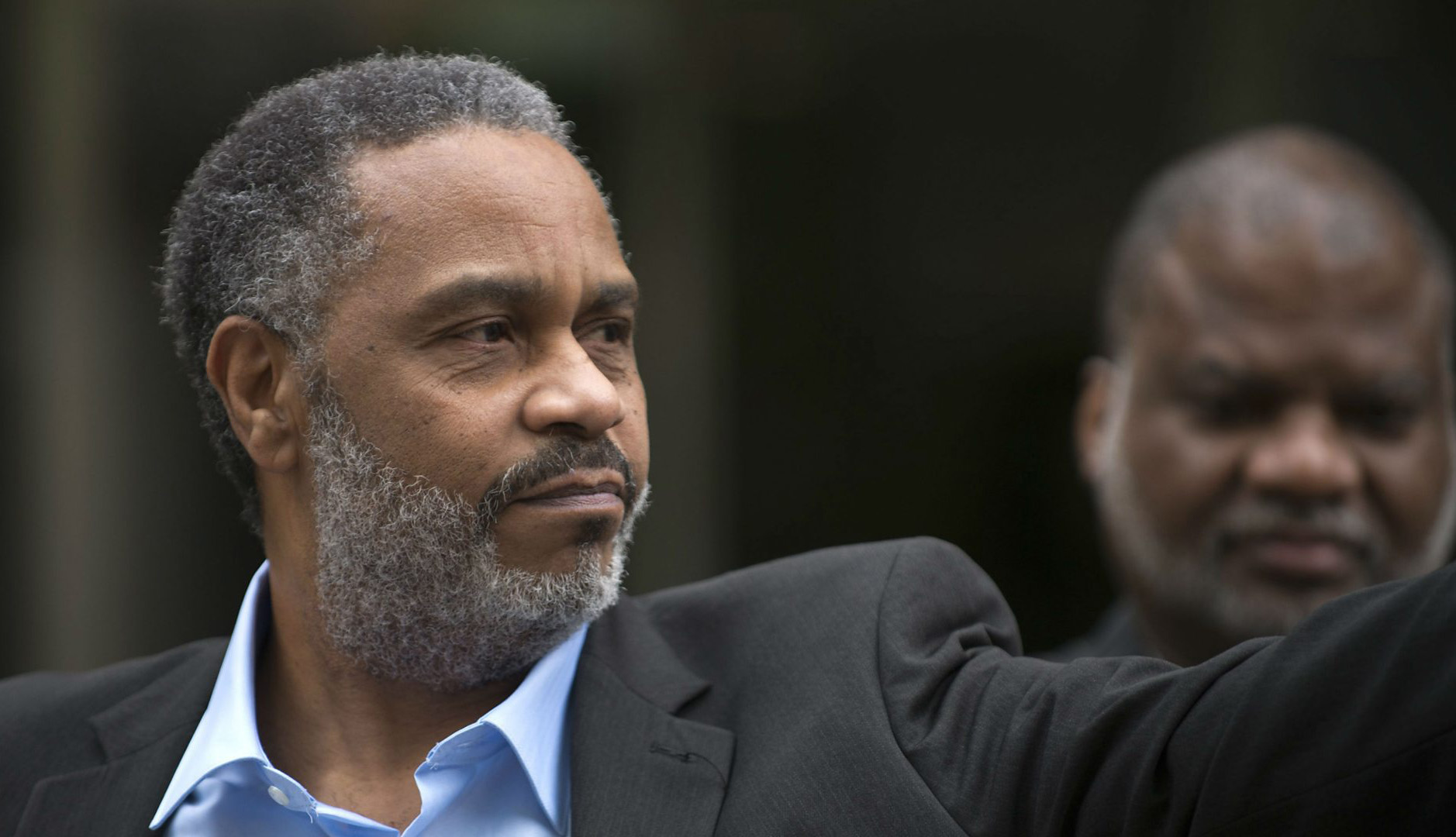 “It’s just like the airport but without a vacation,” says the guard as we put our possessions through the x-ray machine before entering FCI-McKean, a medium-security federal prison for male inmates outside of Bradford, PA. The man we are accompanying into the prison keeps having to exit and remove more items—his shoes, a watch, a belt. Anthony Ray Hinton, who spent nearly 30 years on death row for a crime he didn’t commit before he was released a year and a half ago, isn’t entering this prison easily.

But he has graciously agreed to come and speak to inmates, and eventually he no longer sets off the buzzer when he tries to enter the security area. Our group of nine students and faculty from the University of Pittsburgh at Bradford proceeds with Hinton through additional layers of security, showing our IDs repeatedly and having our hands stamped.

A year ago, I read Bryan Stevenson’s book Just Mercy, a compelling memoir about his work as an attorney and a convincing indictment of the injustices of our current legal system. After colleagues and I decided to adopt Stevenson’s work as our book in common for freshman seminar, creative and professional writing, composition, criminal justice, and business courses, we invited Hinton, who made a brief appearance in the book and had subsequently been successfully defended by Stevenson, to speak on our college campus—and to visit a class of incarcerated students.

It’s a bright, beautiful early-October day, blue sky arching above, green lawns rolling out before us, buildings appearing not unlike our own college campus, except for the coils of barbed wire across the tops of fences and affixed below windows. We gather in a room with men in tan jackets and pants, about fifty people in all, sitting in plastic chairs, signs marching down the concrete block walls. “Respect,” they say, and “Spirituality,” “Success,” “Perseverance.”

Hinton stands before us, in his late fifties with a grizzled beard and rust-colored pants, and quietly begins to talk, confessing that he still can’t tell his story without getting emotional. But he goes on anyway, detailing his arrest and conviction for no other reason than that he was poor and black. He describes the years he spent in a 5×7 cell, thirty feet from a gas chamber where more than 50 people were executed, close enough that he could smell flesh burning. A powerful storyteller, Hinton has appeared on Sixty Minutes and been interviewed in Salon about his experience; he recently told his story to The Guardian as well.

He recounts his inability to speak a word for the first three years of his sentence until a man in the cell next door needed comforting. He pays tribute to his mother, who died while he was in prison but whose lessons regarding compassion and endurance helped him survive. He talks about injustice, racism, forgiveness, responsibility, and the importance of reforming the judicial system. When inmates raise their hands to ask questions, they always begin by congratulating him. They ask questions about his family. They ask for advice about helping their families understand what it’s like to re-enter normal life after incarceration. “Bear with me, because my mind is still locked up,” he advises them to tell their loved ones.

Even now, eighteen months after being exonerated, he says, though he has bought a king-sized bed, he has yet to stretch out after thirty years of sleeping in a fetal position in a cramped cell. He still wakes at 2:45 a.m. because breakfast was served at 3 a.m. The world he returned to has computers, cell phones, and GPS, completely different from the world he left. “My mind hasn’t adjusted to being free,” he says.

And yet, he endured those long years of confinement through imagination and books and a sense of humor and conversations through walls and thinking about other people’s problems instead of his own. “My mind left and came back occasionally to check on my body,” Hinton says, joking about the fantasies that kept him going: marrying Halle Barry and Sandra Bullock, meeting the Queen of England. And now, he says, storytelling is key: “There is some degree of healing every time I tell my story,” he says.

Later that day, he will speak to an audience of nearly 700 on our campus, and, as in the prison, the room will be so silent that we’ll be startled by the creaking of a door, the sound of someone’s purse zipper. Afterward, people will hug him and shake his hand and say, “Thank you.” A student tells him she’s decided to become a lawyer. Another takes him up on the challenge to go sit in his dorm bathroom, the size of a cell, for ten minutes, and do nothing. The student asks his roommate not to let him out, and reports later, “I thought I was going to go crazy.”

But what I will remember the most is how, at the prison, inmates line up to shake his hand. “Congratulations,” each one of them says to him, grave and sincere and deeply respectful. I watch as recognition seems to pass between them, a knowledge that though they may have arrived in a place like this from different paths, they understand on a deep level something about each other’s experience.

After listening to Hinton talk about how he goes out every night to see the stars, how he likes to walk in the rain and feel it on his body, all the things he was denied for so long, we step out into bright sunlight. The day he left prison, Hinton tells our group, the sun was shining brighter than he’d ever seen it. Maybe something like today, I think, walking alongside this man who couldn’t speak for three years, who spent 28 years mostly alone and still finds crowds unsettling, who was baffled by technology when he first encountered the outside world, and who now has the courage to travel and speak about his experience. Only a few days ago, he tells us, he flew to England and met the queen.

We cross the green lawn under a blue sky and pass through more buildings, more doors, more security checks, and then leave behind fences and barbed wire as we walk into the sunny day.