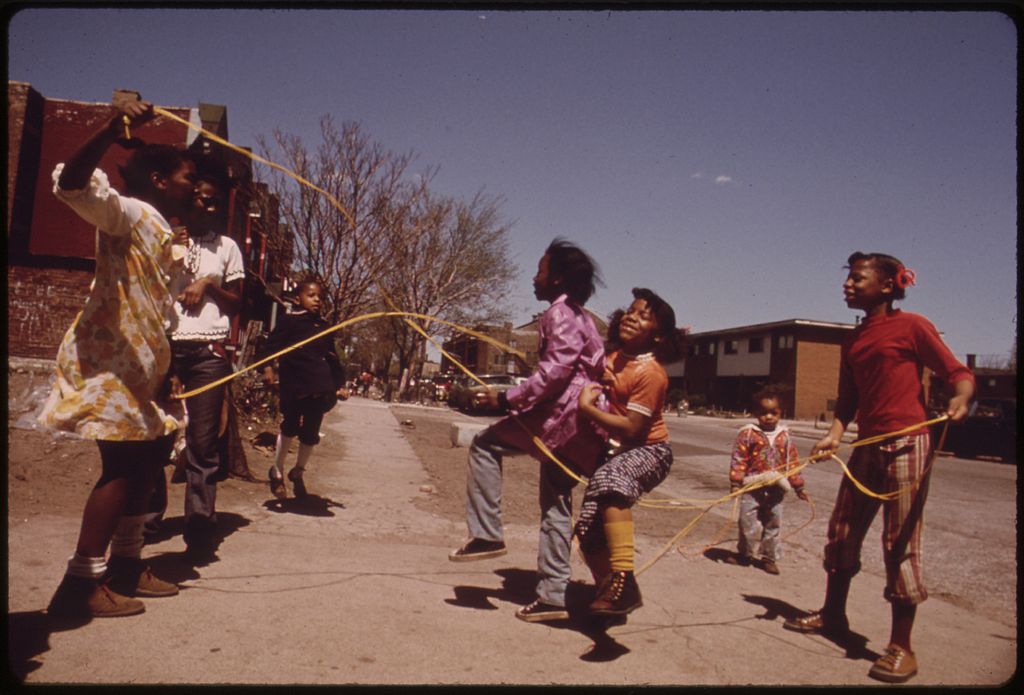 While researching Chicago history for her book Ghosts in the Schoolyard, poet and sociologist of education Eve L. Ewing came across a 1922 document called The Negro in Chicago: A Study on Race Relations and a Race Riot. In her prose introduction to 1919—the 2019 collection of poems that emerged from her writing and research around that document—Ewing wonders, “How could someone claim to tell the story of Black people in this city? The whole story?” The “directness” (as Ewing calls it) and perceived “wholeness” of the story the document purports to tell strikes her as a negation. But empty space offers a chance at abundance. It offers room to move, to grow a physicality, and silence gives sound ricochet. So, Ewing fills her poems with bodies and voices since, as my daughter’s teacher tells her class, “We need our bodies and our voices to tell a complete story.” The interplay between rhythm and language becomes a means by which the marginalized speak.

“Kinetic orality,” a term coined by Cornel West in his 1989 essay “Black Culture and Postmodernism,” is, as West tells us, “the concrete, everyday response to institutionalized terrorism” Black Americans experience. It is “dynamic, repetitive and energetic rhetorical styles that form communities, e.g. antiphonal styles and linguistic innovations that accent fluid, improvisational identities.” While West focuses his analysis on more well-known modalities like jazz, ethnomusicologist Kyra Gaunt sees kinetic orality at work on school playgrounds, too. In her 2007 study of handclapping and jump rope songs and rhythms, The Games Black Girls Play: Learning the Ropes from Double-Dutch to Hip-Hop, Gaunt argues that Black children’s games and songs have made their way into popular music and film as points of connection and recognition, of scene-setting and character development, but their significance also extends to counter-histories and intergenerational trauma. “When their parents share the latest news, or talk about how they are being treated, kids are overhearing that discourse,” Gaunt says in the 2019 New York Times article “Around the World in 5 Kids’ Games.” “One way to alleviate the anxiety from these topics is to make games about them.”

The Chicago riots of July 1919, in fact, began with a Black child’s death. Seventeen-year-old Eugene Williams drowned while swimming “in an area,” as Ewing describes it, “of Lake Michigan tucked between unofficially segregated beaches,” and he “drifted into what was considered the ‘White area’ of the beach.” She goes on to say, “It’s unclear whether Williams was struck by a rock and killed or remained in the water beyond his capability” for fear of “return[ing] to shore.” In the poem “Jump / Rope,” Ewing speaks in the collective voice of neighborhood children who, by integrating William’s death into their jump rope chant, manage to pass on his story and use it as a kind of cautionary tale—a recurring feature of so many folk and fairy tales, nursery rhymes, and children’s games:

The poem’s speaker(s), repeatedly question the various versions of the song, redefining and revising it as it moves down the page and through the game’s physical repetitions:

Little Eugene W
So sorry to trouble you
Rise, Eugene, rise!
Calm your mama’s cries!
Just sit up and look around,
Don’t let em bury you down

Down down baby
Down down, the water’s tugging
Sweet sweet baby
Don’t make me let you go

“Jump / Rope” shows us, in the immediacy of its form, how stories make their way into the bodies and voices of children, and how those stories maintain a living mutability. We recognize the rhythms of popular playground songs in the poem. The contrast Ewing strikes between that nostalgic recognition and the violence of Eugene Williams’ death serves as a stark reminder that our culture is, in fact, riddled with allusions to, and traces of, Black suffering and violence if we care to look for them.

These allusions and traces are given voice through the vital kinetic orality we see, not only in secular media and popular culture like jazz, hip hop, and children’s double Dutch games but, as West tells us, in Black theology as well. Throughout 1919, Ewing employs Biblical language to discuss issues of migration, freedom, and community-creation. Several poems directly reference the book of Exodus, for example, and some, like “The Day of the Undoing,” imitate the rhetorical structures of Biblical parables but forgo the usual Biblical characters in lieu of ordinary children who were “leaping and hollering, cartwheeling and somersaulting, doing the many dances of their homes” until they “slept . . . tangled together under the canopy of [the girl’s] voice”—a character the poem’s speaker describes as “wild-haired,” and who tells the crowds of children that “[e]very boundary is imaginary.” The children are then given agency to transcend those boundaries by walking on air, embodying and giving voice to a just future for themselves with the poem’s single ending-word, “now.”

“The Day of Undoing” contains the kind of timeless quality we see in parables—that is, existing in a constant state of desire—for freedom, for release, for God—that remains untethered to the particularities of any one time or place. And the hope it represents might apply to any culture: we all want a better life for our children. But Ewing ends 1919 with a poem that plunges us back into historical time and into the violence against Black communities by referencing another murdered child: fourteen-year-old Emmett Till, who was lynched by Roy Bryant and John William Milam in 1955. In discussing the poem “I saw Emmett Till this week at the grocery store,” Ewing tells Rosemarie Ho in a 2019 interview for The Nation:

[It’s] an alternate telling of a story. It’s like a retelling. But Emmett Till becomes the last of these three boys that we hear from in 1919, beginning with Eugene Williams and later on Laquan McDonald. The fact that they don’t come in chronological order says something about the nonlinear, eternal return of violence . . . I want people to interrogate what it means to believe that the world just gets better and better all the time.

Till’s presence in the speaker’s pedestrian, everyday life in a place as mundane as a grocery store reminds us that the history of violence against Black Americans follows Black Americans everywhere, is ever-present, even among “the plums” where Till is

. . . one by one
lifting each to his eyes and
turning it slowly, a little earth,
checking the smooth skin for pockmarks
and rot, or signs of unkind days or people

The tenderness with which the dead boy handles the fruit’s “little earth” stands in contrast to the horror he met in life, but because of that tenderness, we remember the horror. And by seeing his whole body, we must, of course, see his broken body, too, when he “[spins] like a dancer / candy bar in hand.” And when he says, “oh . . . it goes, it goes” in reply to the speaker’s question of “how are things going for you?” we hear his voice and recognize both the everyday and the extraordinary in him. We feel the weight of the “going”—that is, pain continues as if on a loop, like the cashier’s conveyor belt, or spinning in opposite directions simultaneously like the “tick-tat” of double Dutch jump ropes.

Kinetic orality is a response to the recurring nature of systemic racism in that it thrives on both repetition and improvisation. Ewing’s 1919 describes both the novelties of life for Black immigrants who moved from the American South to cities like Chicago, as well as the same segregation, violence, and marginalization In the poem “Coming from the Stock Yards,” for example, Ewing explores the “change in status” some people experienced after moving North. The poem’s speaker had considered himself “a scholar in Georgia, though that was part fancy. / just enough reading and writing to be of worth to my neighbors: / katydid people, summer-song folk. they sent me their children after harvest.” Now, he has “the blood of the steers / blossoming across the front of [his] canvas pants,” and sees himself as “an invisible man.” The speaker, who is grieving the loss of his students, is also grieving a lost identity that could be described as having been taken from him. For him, teaching in Georgia meant sensory-rich, place-based learning that emphasized a shared literary history that isn’t dead and static, but rather moving and alive. West’s assertion that “linguistic innovations that accent fluid, improvisational identities” exist at the heart of Ewing’s notions about the sort of education the poem’s speaker provided—namely, he and his students exchanged ideas in a recurrent collaboration that, over time, encouraged him to see himself in a new way, and encouraged his students to see themselves anew as well, “the woods a grand schoolhouse” where the speaker and his students went “marching two-by-two to the creek to recite Wheatley or Dunbar. / naturalists, the lot of them, calling out every tree by name. every fish.”

The “Coming from the Stock Yards” ends: “X is how they signed their names when they first came to me. To each I said no, / you have a name, and I wrote with them until they wrote alone, / zoetrope children, moving always and never. zephyr children, wind of my heart.” The poem manages to look back nostalgically at what the speaker sees as a more idealistic past (“loveliest were the days . . . ”), while also acknowledging that though his beloved students appear—in his memory—as “always moving” they, like the zoetrope, only offer an illusion of movement. Systemic inequalities and unjust policies, violence, and poverty pin them to the board like butterflies.