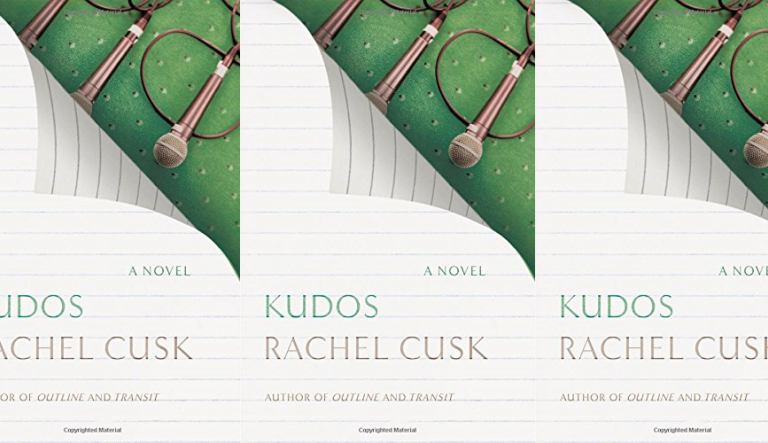 Cusk’s remarkable grit can be explained, at least in part, by German philosophy—particularly the nihilism of Friedrich Nietzsche. I won’t bog you down with pedantics, but nihilism is basically an aesthetic theory of extreme skepticism, in which life is meaningless and free will does not exist. I have a hunch that Cusk admires Nietzsche’s brand of nihilism, too, because there is a lot of it in her new novel, Kudos.

Kudos, the last installment of her much–talked about trilogy, which began with Outline and Transit, has a deceptively celebratory title. The book is not celebratory. In fact, the title is so slyly cynical—Kudos! (Chef’s kiss! Congratulations! Applause!)—I feel slapped by its subtle falseness. It is like a murderer saying “kudos” before pushing you off a cliff. Cusk’s ability to twist this knife is terrifying. All the more so because she has achieved this sinister brilliance in the same convention-breaking form and style that recently won her a Guggenheim. To top it off, she one-ups Nietzsche’s nihilism by writing from a point of view that is viciously attuned to the feminine experience. Her version of extreme skepticism holds women’s pain up to the light like a prism, turning questions of motherhood and personal beauty this way and that, refracting sadness and ultimately proving—through dialogues about literary elitism, cruel husbands, and the superficiality of success—that none of us are in control of our destinies.

“You are nothing like your photograph!” exclaims the narrator’s publisher as she arrives at an unnamed literary conference in Germany. This seemingly simple remark leads to a conversation about author photos—about how deception often makes for great book sales. The more out-of-date your photo, the younger and more appealing you seem. This theme of artificiality and pretension is carried throughout the book. Pretentiousness is well-trodden territory for Cusk (she has been criticized, in the past, for writing exclusively about the wealthy and the highbrow). But to dismiss Cusk as a narcissist is to misread the complexity of her work. The publisher in this scene of Kudos cites a too-young author photo not to flatter the narrator with vanity but to trap her in it.

It’s telling, too, that the only person of color to appear in the novel is an unnamed young poet who flees from a writers’ retreat at a castle in Italy after having been enticed there by a countess who treats him as some sort of prize. The countess wears lavish jewelry to dinner each night, where she expects all her artists in residence to feed her with witty conversation, thus forcing an atmosphere of strained contrivance—a performance. The poet feels uncomfortable and leaves, and the countess flies into a flurry of distress. It strikes me as significant that this is the only part of the book where a nonwhite person is mentioned. The poet is the only character who chooses to exit rather than put on a mask. As if to say that social convention, in the world of this novel, is such a charade—so dictated by unfair sleights of hand and powers outside of our control—that it is a trap all its own.

Later, another writer at the conference describes a story that was recounted to her on an airplane by a woman who had survived a bad ski accident and was braced head to toe in steel rods. Before the accident, the woman had felt a great sense of freedom, as if flying down the mountain were “an opportunity to take leave of reality.” In a dark and unexpected twist, the writer relaying this anecdote chooses to understand it as evocative (somehow) of the experience of motherhood. Because having a child, she says, is like “being broken and then reassembled into an indestructible, unnatural and possibly suicidal version of yourself.” Becoming a mother, in other words, is as violent and crippling as getting crushed in a full-body accident.

Themes like the monstrousness of motherhood have come up in Cusk’s work before, of course, but never has the Nietzschean undertone been so crystal clear. Her phrasing is too precise for this to be a coincidence: “indestructible, unnatural and possibly suicidal.” She might as well be shouting from the rooftops, “The Übermensch is female!” But shouting would be decidedly un-Nietzschean (Nietzsche was, himself, a fan of masks and artifice). So instead, she triangulates her message through snippets of polite dialogues. This stylistic overlap with nihilist philosophy comes across as quietly chilling. All the more so because, at this point in the novel, Cusk is just getting started.

The narrator goes on to meet with a series of interviewers and publicists—each of whom, in turn, offers her tales of failed marriages and familial estrangement, opinions into the debate on nature vs. nurture, and remarks on how disgusting it is to watch other people eat (eating is “a vulnerable act”). One heiress, who sits on the board of directors of the literary conference, announces that she does not even like contemporary writing. As this heiress waits in line at a catered buffet, she explains to the narrator how she is happiest when walking on the grounds of her estate. The irony is that these rare moments of contentment are also when she is most aware of the cruelty of the universe. The heiress cannot help but wonder: Would she have been happier someplace else?

These encounters are all presented with the same porous, filtered passivity of Outline and Transit. The narrator does not express a sense of identity or self but, rather, moves from conversation to conversation like a sieve, without comment—unless, of course, you interpret her silence as a comment on the invisibility of women. At first, though, the scenarios unfold elegantly and seem disparate enough to be innocuous. An older writer confesses that he has always seemed fated to the repetition of certain patterns, and a Welsh novelist admits with regret that nothing of his rural countryside has stayed the same over the years. Not a single blade of grass is the same—it’s all changed. These accumulated fragments gather force so slowly, like a tidal wave that begins as an imperceptible undertow, you do not realize until it’s too late that they are carrying you towards a horrific culmination.

The turning point comes when a talk show interviewer begins to tell the narrator about a French-American artist, Louise Bourgeois. When Bourgeois’s children were small, she produced a series of self-portraits in which she represents herself as a spider, as if drawn in a child’s scribbling hand. These images appear in disturbing contrast to the canonical vision of the glowing maternal figure. Here, the artist disappears herself: suppressed, exploited, transmogrified—a “benign monster of her child’s perception.” The interviewer explains how lots of female artists ignore their femininity. They hide topics that male intellectuals find distasteful behind a curtain. Women artists who choose to make themselves seem perfect and inoffensive are more likely to achieve commercial success. On the other hand, Bourgeois’s spider seems almost a reproach to that choice. Maybe Bourgeois has simply removed herself from the larger discourse by refusing to participate. Or maybe, in presenting herself as a horror, she has actually freed herself entirely—”free,” here, meaning in the nihilistic sense “free from God, free from purpose, free from morals.”

“There is no better hiding place,” a well-known critic tells the narrator elsewhere, “than somewhere as close as possible to the truth.” Cusk’s own mastery of this device becomes evident in the final pages of the novel, when she removes her own mask. Or rather, as an author, she lifts the mask that has concealed her purpose in writing Kudos. The narrator wanders away from the conference to stand for a moment by the sea and return a phone call from her teenage son in London. The son has gotten into some trouble with his friends by accidentally starting a fire. The narrator reassures him. After the phone call, she wades out into the water, and when she turns back to face the land, she locks eyes with a man who—unperturbed, merrily—is peeing into the ocean. It is in this moment that she knows she has locked eyes with destiny.

The grotesque, meaningless perfection of this ending to the Outline trilogy leads me to one conclusion only. Rachel Cusk must be our era’s new feminist Friedrich Nietzsche. In any case, she definitely deserves that Guggenheim. She gets a “kudos” from me.