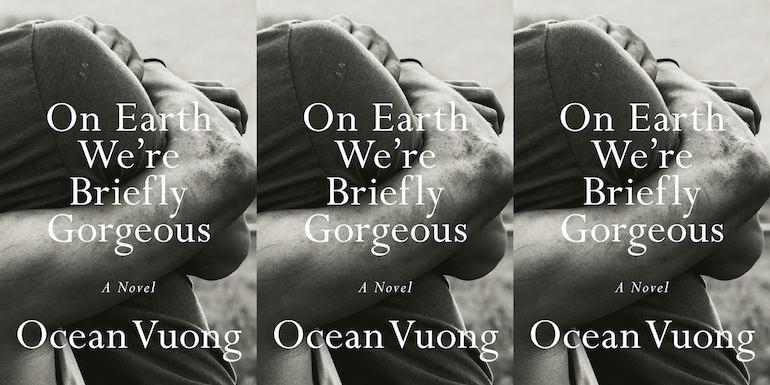 “‘Have you ever made a scene…and then put yourself inside it?’” the narrator’s mother in Ocean Vuong’s debut novel, On Earth We’re Briefly Gorgeous, asks her son as she colors in a Thomas Kinkade house. She continues, “‘Have you ever watched yourself from behind, going further and deeper into that landscape, away from you?’” In response, the still young narrator thinks, “How could I tell you that what you were describing was writing? How could I say that we, after all, are so close, the shadows of our hands, on two different pages, merging?” The landscape, as well as the mother-son dynamic, that Vuong creates is searing, vivid, and nothing like the house the narrator’s mother colors in. Primarily set in Hartford, although some scenes are set in Vietnam during the war, the landscape is heartbreaking, filled with queer hate; addiction and overdoses; domestic violence; mental illness, including PTSD; and the trials of being an immigrant. The beauty and love in this landscape are dark-tinged and fragile. Language, or one’s tongue, is ultimately what binds these traumas—yielding something gorgeous, something more powerful than the traumas themselves.

“Let me begin again,” the novel opens. “Dear Ma, I am writing to reach you—even if each word I put down is one word further from where you are.” Ostensibly written as a letter to his mother that she will likely never see, Vuong’s opening implies an existing conversation or an attempt that has come before that the reader is not privy to. From there, the narrator deep dives into his family’s, and town’s, history. This opening reveals how much of a struggle speaking, or writing, is for the narrator and how much there is for him to examine.

Readers familiar with Vuong’s work will notice that On Earth We’re Briefly Gorgeous’ beginning passage was published as a personal history in The New Yorker, and the echoes one continues to see of Vuong’s life throughout the novel make it particularly poignant. We never learn the narrator’s proper name; he is only referred to as “Little Dog” since “[t]o love something, then, is to name it after something so worthless it might be left untouched—and alive. A name, thin as air, can also be a shield.” Given the brutality of his world, this choice of naming, or language, is an attempt to give Little Dog some protection, although he is nearly crushed time and again.

“It only takes a single night of frost to kill off a generation,” Little Dog states of migrating monarch butterflies. “To live, then, is a matter of time, of timing.” When he asks, “What do we mean when we say survivor?” the pronoun—“we”—becomes ambiguous. Is Little Dog addressing his mother (“Dear Ma”) or is he implicating us all? “Maybe a survivor is the last one to come home, the final monarch that lands on a branch already weighted with ghosts.” Little Dog’s ghosts: his nameless GI maternal grandfather, his father locked away for domestic abuse, his friends who overdose, his lover who overdoses. Their interlocked stories create the marred portrait of Little Dog’s Hartford childhood as an immigrant and a queer man in a time and place when the opioid epidemic is just beginning and hate crimes are committed against queer people frequently.

Often, the narrator and his mother and grandmother must rely on language, English in particular, to exist, rendering their mother tongue useless. “No object is in a constant relationship with pleasure, wrote Barthes. For the writer, however, it is the mother tongue,” Little Dog notes, then asks, “But what if the mother tongue is stunted? What if that tongue is not only the symbol of a void, but is itself a void, what if the tongue is cut out? Can one take pleasure in loss without losing oneself entirely?” Little Dog and his family have already lost so much—their home, husbands, a child, their culture—and in this place, they need English to survive. “Sorry” becomes the one English word his mother can rely on, particularly working in a nail salon. “Being sorry pays,” Little Dog observes, “being sorry even, or especially, when one has no fault, is worth every self-deprecating syllable the mouth allows. Because the mouth must eat.” And no matter how much Vietnamese immigrants like his mother might try to get their “jaws [to] soften around English syllables” and do “homework for nighttime ESL classes that cost a quarter of [their] wages,” embracing a new tongue is nearly impossible.

After Little Dog gets beaten up at school by boys who call him a “freak, fairy, fag,” his mother instructs him to find a way to put an end to the bullying. “‘You have to because I don’t have the English to help you,’” she says. “‘I can’t say nothing to stop them. You find a way. You find a way or you don’t tell me about this ever again, you hear? ’” While at first her words might seem callous, they’re more truly words from a desperate mother who doesn’t have the language to protect her son in a new country. “‘You have to be a real boy and be strong,’” she continues. “‘You have to step up or they’ll keep going. ’” Her command to find a way to save himself from harm turns into an indictment of his masculinity, although he is only nine. He must stand up with his language; he must also be masculine. Vuong describes one of Little Dog’s tormentors as being “only nine but [having] already mastered the dialect of damaged American fathers.” This brief, crushing anecdote reveals how high the stakes are for immigrants and how in command they must be of the English language. “One does not ‘pass’ in America, it seems, without English,” Little Dog observes. His mother implores, “‘You have a bellyful of English…You have to use it, okay?’” But this story also reveals that one cannot pass when deviating from the norm of American culture, especially when it comes to being a man.

Vuong further demonstrates the essentialness of language through his depiction of Little Dog’s world and the traumas that comprise it. Little Dog’s mother’s sweat-drenched bra lands on the floor “with the thud of a knee brace” after work. While this simile rings as surprising and original, it’s ominous, exposing the physical toll that working at a nail salon is taking on Little Dog’s mother. When Little Dog starts to work on a tobacco farm at 14, he notes, “You could hear the water inside the stems as the steel broke open the membranes, the ground darkening as the plants bled out.” As with other descriptions Vuong uses, the image this description conjures halts the reader, foreshadowing what’s to come but also echoing the past, all the bodies bleeding out in the Vietnam War, how lucky his grandmother and mother were to escape with their lives.

Vuong describes Trevor, the boy who becomes Little Dog’s lover, as having muscles that are “field-toned and burger-fed,” a description that marks him as unequivocally American. There’s also “something about the way he looked when lost in thought, his brow pinched under squinted eyes, giving his boyish face the harsh, hurt expression of someone watching his favorite dog being put down too soon.” Cutting descriptions like this hint at Trevor’s tragic fate. From the beginning, Trevor and Little Dog’s romance is fragile, not just because being gay is taboo and flies in the face of Trevor’s upbringing. Trevor’s addiction becomes apparent early on, and Vuong exposes it in pieces before delivering the devastating end. Vuong, in a lyric passage, reveals the history of Trevor’s addiction, beginning when he broke his ankle at 15, was prescribed OxyContin, and became addicted after just a month. We see the boys flying through fields in Trevor’s Chevy, “a patch of fentanyl hot on [Trevor’s] arm, the liquid melted through its edges and dripping down his bicep like sick sap.” We see Trevor high more often than not, Little Dog powerless to end Trevor’s addiction in a part of the country overrun with it. Even after a couple of overdoses, Trevor can’t give it up.

Little Dog learns to be strategic in his use of language as a means of self-preservation. “I didn’t want to use the Vietnamese word for it—pê-dê—from the French pédé, short for pedophile,” Little Dog thinks as he tells his mother that he is gay. “Before the French occupation, our Vietnamese did not have a name for queer bodies—because they were seen, like all bodies, fleshed and of one source—and I didn’t want to introduce this part of me using the epithet for criminals.” Later, after Trevor dies from an overdose, Little Dog walks out of his college class in New York City and returns to Hartford. He intentionally chooses to say to his mother in English, “knowing the words seal [her] off from [him],” “‘I hate him, Ma…I hate him. I hate him.’” Seeing his distress, she beseeches him, “‘Please, I don’t know what you’re saying. What is that?’” Then, when Little Dog has become a writer living in New York, he wonders, “Why can’t the language for creativity be the language of regeneration?” Whether Vietnamese or English, Little Dog chooses the language he needs to preserve himself, to grieve, to heal.

In the end, Little Dog and his family are seeking freedom in a world that has caged them. “All freedom is relative—you know too well,” he says, “and sometimes it’s not freedom at all, but simply the cage widening far away from you, the bars abstracted with distance but still there.” Little Dog’s letter to his mother reveals all the bars the family has faced, still faces, and the reckoning they must undertake to exist, to survive. “But I took it anyway, that widening,” he adds. “Because sometimes not seeing the bars is enough.” Little Dog must find a way to live with what he has.

“You once told me that memory is a choice. But if you were god, you’d know it’s a flood,” Little Dog writes to his mother. Although On Earth We’re Briefly Gorgeous is short, it’s a flood—a flood of memories, a flood of trauma, a flood of discrimination, a flood of violence. The memories wash over Little Dog again and again, languaged into a crushing, powerful poignancy.